We’re running out of Smackdowns on Thursday nights as we only have two more weeks before heading over to the live world for a major change. It’s also interesting to see how things go without Roman Reigns around, though the more interesting thing will be seeing how he is when he comes back. Let’s get to it.

Tonight it’s Cesaro vs. Sheamus vs. Alberto Del Rio vs. Apollo Crews for a US Title shot later in the night.

Apollo Crews says this is a huge opportunity and sometimes the impossible is possible.

Sheamus is glad Crews is in this match because he can have some fun before winning the title.

Del Rio doesn’t know who Crews is but he’ll win the title tonight.

Cesaro vs. Alberto Del Rio vs. Apollo Crews vs. Sheamus

Winner gets a US Title match later tonight. Cesaro and Crews actually pair off to start before Sheamus and Crews fall out to the floor. Cesaro hits a tilt-a-whirl backbreaker on Del Rio before heading to the apron for a flip dive to take out Sheamus. Del Rio sends Cesaro into the barricade and then the post before getting Sheamus to help with some double teaming back inside. The Brogue Kick is broken up as Crews comes in to cross body both heels, leaving Alberto to hit a Backstabber on Sheamus.

Back from a break with Crews breaking up the top rope double stomp, allowing Cesaro to hit a high cross body for two on Del Rio. Sheamus breaks up a Swing with the Irish Curse but Del Rio superkicks Sheamus to break up the Cloverleaf. The cross armbreaker has Sheamus in trouble until Crews makes another save. It’s time for the uppercut party until Sheamus plants him with a tilt-a-whirl slam. Crews hits a cross body to put Sheamus on the floor, leaving Cesaro to Swing Del Rio into the Sharpshooter for the tap out at 9:44.

Post match Del Rio sends Cesaro into the steps as Rusev comes out for the title match.

US Title: Rusev vs. Cesaro

Rusev is defending and Cesaro has a banged up shoulder and ribs from going into the steps. Cesaro fires off uppercuts to start but gets stomped down and kneed in the ribs. Rusev pounds on his own chest but Cesaro muscles him over with a suplex for two. The champ grabs a bearhug but Cesaro fights out and hits the springboard uppercut.

Rusev goes up top, only to get dropkicked to the floor for another cannonball off the apron. Back in and a swinging Rock Bottom puts Cesaro again and sets up more Bulgarian shouting. Cesaro uppercuts and clotheslines his way back out but can’t get the Sharpshooter as Rusev kicks at the ribs. A kick to the head sets up the Accolade and Cesaro taps at 6:13.

Kay is from NXT and gets a jobber entrance. Dana shoves her around with ease and says playtime is over. Kay gets dropped face first on the top turnbuckle before Dana chokes her in the corner. A cartwheel splash gets two but Billie gets in a discus lariat and big boot for two. Not that it matters as the Samoan Driver ends Billie at 2:53.

Sasha Banks says she’s ready for Charlotte because the Boss isn’t just a nickname. If Charlotte wants to throw Dana in her way, it’s just going to delay the inevitable. Summer Rae comes in to say she’s sick of Sasha so a match is made for tonight.

It’s time for MizTV with guest Dean Ambrose, who comes out with a paper bag in his hand. Miz yells at him for coming out early as Dean pulls out a sandwich for a snack while talking about Maroon Five: Battleground. Miz tries to correct him while Dean sucks up to the crowd. Dean plugs Battleground and talks about his own talk show. Miz doesn’t think much of the Ambrose Asylum because it just had a stupid plant.

That’s not cool with Dean and the fans get in an argument over which show is better. That turns into which title is better and Miz brings up Stephanie hating Ambrose as champ. A fight is teased so Miz takes off his jacket, which Dean uses to wipe his mouth. Maryse offers a distraction and Miz decks Dean before leaving. Dean keeps chewing despite holding his head.

Rowan hammers both of them in the head to start before it’s off to Strowman, who slams Aaron onto Mike for the double pin at 55 seconds.

Post match New Day comes up on screen ala the Wyatts to ask what Bray fears. Big E. thinks it’s either soap or the ghost from Conjuring 2. Woods doesn’t have much to say as Big E. thinks Bray may be afraid of being exposed. Bray notices that Woods isn’t laughing so he should tell his friends what he already knows. The devil calls for Woods so it’s time to pray. Or maybe run.

Post Wrestlemania Raw rematch, which was Sasha’s last singles match on the two main shows. Sasha wristdrags her off the top to start but gets sidestepped out to the floor. A big boot knocks Sasha off the apron and we take a break. Back with Sasha getting some rollups for a series of near falls.  It’s time for the clotheslines for the real meat of her comeback and Summer is in trouble. Summer avoids the double knees in the corner and kicks Sasha in the head for two, only to be sent into the middle turnbuckle, setting up the double knees. The Bank Statement ends Summer at 8:52.

We look at Monday’s matches with AJ Styles and John Cena failing to get into the pay per view title match.

Dean Ambrose vs. The Miz

Non-title and Miz comes out second for some reason. Dean hammers away to start as Mauro says Dean is the man with the championship. Miz buries a knee to the ribs to take over but Dean comes back with a cross body and right hands to the head. Maryse pulls Miz out of the way of a suicide dive but Miz saves himself from the top rope elbow.

Neither finisher can hit but Dean clotheslines him on the floor and gets in more right hands. Dean is sent into the barricade and we take a break, coming back to see Miz working on the leg. It’s off to a basic leglock but Miz takes too long going up, only to break up a superplex attempt and hit the top rope ax handle. A neckbreaker gives Dean a breather and comes back with his basic comeback package, including La Majistral for two.

Dean’s middle rope dropkick is countered into the Figure Four. Ambrose gets over to the ropes and knocks Miz to the floor for a suicide dive. So much for the selling, just like Monday. The Rebound Lariat is countered into the Skull Crushing Finale for two. Miz is frustrated so he makes the mistake of trying another ax handle, only to have Dean step aside and grab Dirty Deeds for the pin at 14:35. 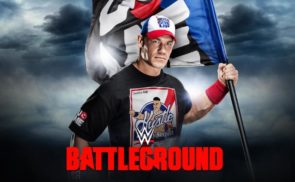 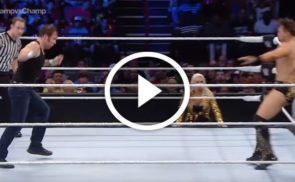