We’re getting closer to Battleground but things have changed a bit because of Roman Reigns’ suspension. It should be interesting to see if that’s actually referenced during the show as they could just as easily say Rollins attacked him off air or that he was injured during last week’s match. Let’s get to it.

Here’s Seth Rollins to open things up. He talks about the upcoming triple threat but stops to talk about the Roman Reigns scandal. What he did to get himself suspended soiled the Shield’s name and then he even put out a statement about it. We see the Tweet from Reigns saying he violated the Wellness Policy and apologizing for it, which Rollins doesn’t buy. What about an apology to the fans?

As for the last part where Reigns says he owns it, all that matters is Rollins owns him. Reigns doesn’t deserve a second chance or forgiveness or to be in the main event of Battleground. Based on the suspension, we might as well just make it a singles match because that’s what Rollins deserves.

Cue Ambrose to say everyone makes mistakes, like being Seth’s friend or Rollins wearing skinny jeans. As far as Dean is concerned the triple threat is still on. This brings out AJ Style to say it should still be a triple threat with himself taking Reigns’ place. Dean doesn’t make the decisions around here but thinks it’s still a triple threat.

They all bicker with each other when John Cena comes out as well. He’s held that title fifteen times and had his first match in WWE fourteen years ago today. Cena won the last time he beat Ambrose so let’s make it a fatal fiveway. Now it’s Stephanie McMahon to say she doesn’t like Ambrose standing in the ring as champion. She does however like the idea of Cena and Styles in the Battleground title match. Therefore tonight it’s Cena vs. Rollins and Ambrose vs. Styles. If Cena and AJ win, they can be added to the title match at Battleground.

This is Sasha’s first match on Raw or Smackdown since April.  Sasha sends Dana into the corner to start but Brooke reverses and does the pat on Sasha’s head. That just earns her an ejection out to the floor and we take a break.

Back with Charlotte putting Paige in a chinlock, apparently due to kicking her in the face during the break. A running flip neckbreaker allows Charlotte to taunt Sasha a bit and draw the hot hotheaded Banks in. Paige dives for the tag but settles for a superkick to the champ’s face, allowing her to bring in Sasha. Everything breaks down and double knees in the corner sets up the Bank Statement to make Dana tap at 8:46.

Non-title and we actually get a match here despite Titus attacking before the bell again. Titus misses a charge in the corner and gets stomped down, setting up a chinlock that goes nowhere. A dropkick puts Titus down and a few knees to the ribs keeps him in trouble, only to have the threat of a big boot sends Rusev outside. We get a double clothesline before Titus throws Rusev over the timekeeper’s area for the countout win at 4:09.

Stephanie runs into Kane, who is still trying to get a chance at running Smackdown. Miz and Maryse come in to complain about the lack of a red carpet and the limo driver not opening the door for them. Kane mentions his own acting career before bringing up Miz not defending the title in a long time. That’s accurate actually so Stephanie makes a title match against a mystery opponent. It’s like a cliffhanger you see.

If Cena wins he’s in the title match at Battleground. They start fast with Seth actually getting the better of it off some right hands. A dropkick and Blockbuster get two each on Cena but he initiates his finishing sequence to come back. It’s way too early for that so the Shuffle is broken up with a kick to the face.

Back from a break with Cena hitting the shoulders into the Protobomb again but catching the kick that would break up the Shuffle. A third Protobomb sets up the Shuffle but the AA is countered into the low superkick for two. Cena comes right back with a tornado DDT for two of his own, only to have Seth kick him in the face.

The frog splash misses though and Cena heads up top but Seth runs the ropes for a superplex and rolls into a Falcon’s Arrow for two. A quick AA gets two more with Seth getting his foot on the ropes. Another AA doesn’t work so Cena grabs the STF but cue the Club for a distraction, setting up the Pedigree for the pin at 16:00.

Enzo says they’re riding a wave and the wave is these people. Therefore he wants the fans to do the wave as soon as the bell rings. The Bada Boom Shakalacka ends we’ll say Kershing at 25 seconds.

Post match Cass loads up the spelling but the Social Outcasts interrupt. Dallas says the Outcasts are H-A-R-D so Cass asks which is the hardest. A big boot drops Slater and the other two aren’t so willing to get in the ring.

Bob Backlund/Darren Young segment with Backlund saying it’s time for the Darren Young Era. This sounds like the last one.

Some Special Olympians got to train at the WWE Performance Center.

The Special Olympians are here and get a presentation to the crowd.

Natalya is on commentary and there’s no match as Becky goes right after her, earning a pretty loud BECKY chant as a result.

It’s time for the Highlight Reel with guests Sami Zayn and Kevin Owens. After Jericho blames both of them for that maniac Dean Ambrose being WWE World Champion, he brings them out and brings up their careers being put on hold because of this feud. Sami wants to end everything at Battleground because they might wind up on different shows without anything being settled.

Owens won’t say anything so Sami accuses him of being a coward. Sami wants to hear Owens admit that he’s jealous of Sami for getting to WWE first in NXT. Owens says he’s told Sami the truth many times: what he did was to advance his own career. Everything they did was to get to WWE and Sami should have done is congratulate Owens for using him as a stepping stone. The fact that he doesn’t shows that Owens is a better friend than Sami ever was, but the match is on for Battleground.

Jericho loves the idea but says Owens is just trying to follow Jericho’s path. Chris doesn’t think much of Sami either and would love to shut up his stupid idiot face right now, but he’ll leave Owens to do that at Battleground. We get the Gift of Jericho pose but both Sami and Owens kick him in the face at the same time. The fans seem really intrigued at the idea of these two working together.

Intercontinental Title: The Miz vs. ???

Miz is defending against…..Kane, who throws Miz around to start but can’t get a chokeslam. Instead it’s a big boot to the champ’s face, followed by a side slam for two. Maryse gets on the apron to break up another chokeslam attempt, only to get knocked to the floor for some screeching. Miz is nice enough to check on her and her injured ankle, drawing our second countout for the midcard champions of the night at 3:27.

Post break Maryse shows Miz that she was faking.  Miz is amazed.

Sheamus wants nothing to do with Crews to start so Apollo grabs a quick suplex on Del Rio and brings in Cesaro. Some kicks stagger Cesaro and a DDT gets two for Alberto. Sheamus comes in for the Irish Curse before slapping on a chinlock to keep things slow. Cesaro throws him down and the double tag brings in Crews to clothesline Del Rio a few times before Alberto intentionally enziguris Sheamus and walks out. A dropkick sends the steps into Sheamus, setting up the toss powerbomb to give Crews the pin at 5:00.

Dean Ambrose is disappointed that he didn’t get a parade for winning the title but he’ll settle for a match with Styles tonight. Stephanie comes in and talks about how she wants to get the title off Dean as fast as she can because he’s a disgrace to the company. Oh and no one would want his autograph because he’s not worth it.

The Wyatts are here…..and it’s New Day in costumes, with Kofi as Rowan, Woods as Harper and Big E. as Bray, complete with cowboy hat, gray beard with a string to hold it on, overalls and a lantern made up of light up unicorn horns. We even get a New Day themed Wyatt style montage. Kofi throws the mask off and wants to know how Rowan can breathe in that thing. They get in the ring and Big E. plays up to being born in Tampa. Big E.: “Tampa General Hospital anyone?”

They make fun of the outfits until the real Wyatts interrupt. Bray says it’s a new day and tells the fans to vilify him. How can the power of positivity help someone who just lost his job and can’t put food on his table? Kofi calls the power of positivity a way of life and Big E. agrees but Bray focuses on Woods. Xavier looks a bit shook and Bray says Woods can confide in him. They’re just playing one of Woods’ games but there are no winners or loses. There’s just malice and destruction and New Day will fall.

Post break New Day thinks it’s a great idea to keep messing with the Wyatts. Kofi: “It was the best idea we’ve had since we went and saw Finding Dory the other day.” Woods looks shaken and walks off.

Non-title and Rollins is on commentary. Feeling out process to start with Ambrose getting taken down in a headlock. Back up and Dirty Deeds doesn’t work so we take an early break. We come back with AJ hitting a dropkick and slapping on a chinlock. A hot shot breaks up AJ’s momentum and a fisherman’s suplex of all things gets two for the champ.

AJ gets the same off a faceplant but takes too much time getting to the top, allowing Dean to grab a butterfly superplex. Styles is back up though and grabs a torture rack into a spinning powerbomb, only to miss the Phenomenal Forearm. Dean wrenches his knee though and that means the Calf Crusher. The rope is quickly grabbed though and Rollins is relieved.

Dean sends him outside and he can still do the suicide dive on the bad leg. Back in and AJ rolls through the top rope elbow, followed by the Pele. Dean’s leg is fine and he hits the rebound lariat to put both guys down. This brings out the Club so AJ can get two off a brainbuster. Cena comes down to fight Gallows and Anderson but the distraction sets up Dirty Deeds to put AJ away at 15:45.

Post match the Club beats up Cena as Rollins hits two Pedigrees on Ambrose. Cena gets a Magic Killer on the stage and Dean takes another Pedigree to end the show. 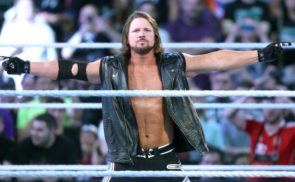 Rumor: WWE Officials Expected AJ Styles to Be a Midcard Wrestler at Best 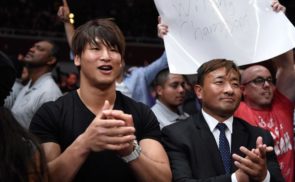