It’s an interesting time in WWE as we’re less than a month away from the new era really taking hold as the Draft takes place and separates the two shows into different entities. On top of that though, Roman Reigns has been suspended for thirty days, meaning the build towards the triple threat match at Battleground could be interesting. Let’s get to it.

The opening video focuses on the recent issues with the World Title.

Here’s Seth Rollins to get things going. He talks about how when he was a kid, his parents would tell him that he could do anything if he worked hard enough. Well obviously that was a lie because no one works harder than he does but Dean Ambrose is the WWE World Champion. Ambrose should have given him his rematch one on one but instead we’re coming up on this triple threat at Battleground to make it as hard on him as possible. As for tonight though, Seth is going to prove that he’s more man than Ambrose ever could be by issuing an opening challenge.

This brings out Sami Zayn and the fans seem interested. Rollins: “Did your master Kevin Owens let you off your leash for a couple of hours?” Cue Dean Ambrose, who has his guys turn this into an impromptu Ambrose Asylum. Actually wait because Dean needs to draw a title on the sign because this is now the championship edition. Sami is thrilled to be on the show but Rollins freaks out because he hates this show. Dean says Rollins has always has a poor attitude as Seth storms out to get ready.

They get some inset promos with Del Rio claiming Cesaro cost him the briefcase and Cesaro telling him to do something about it. Del Rio grabs a tilt-a-whirl backbreaker to start so Cesaro hits one of his own. The uppercut train sends Del Rio outside for the flip dive off the apron, only to have Alberto go after the apron as we take a break.

Back with Del Rio slapping on an armbar and taking the arm out to block another uppercut. Alberto goes up but dives into an uppercut from the good arm. The corkscrew uppercut gets two followed by a double stomp for the same on Alberto.

Del Rio comes back with a Backstabber for two of his own but Cesaro comes back with yet another uppercut. Cesaro gets crotched while trying a superplex but is still able to lift himself up and armdrag Del Rio down. A quick cross armbreaker attempt is countered into the Neutralizer for the pin on Alberto at 10:26.

Sheamus hammers away and tells Apollo to smile now, only to have Crews cross body both of them over the top to the floor. Crews sends him into the steps before having to fight out of the Irish Curse back inside. An enziguri sets up the standing moonsault for two on Sheamus but he comes back with the ten forearms to the chest. The Regal Roll on the floor has Crews in trouble and Sheamus makes it worse by loading up the steps. Crews dropkicks him into the barricade, only to have Sheamus kick him off the apron. A whip into the steps is enough to get Crews counted out at 3:55.

Recap of AJ Styles vs. John Cena on Sunday as well as Monday’s fallout.

The Club is happy with what happened on Monday but the Usos return. Jey calls the bald guys head and shoulder and we’re getting Jimmy vs. AJ for later.

Mauro bills this as a Smackdown first. This is joined in progress after a break with Jimmy running Styles over and dancing a bit. That’s fine with AJ who takes him down into a headlock but Jimmy reverses into one of his own. Jimmy sends him outside but the baseball slide is countered as AJ grabs the feet and sends him head first into the steps.

Back in and AJ catapults him throat first into the bottom rope. Jimmy comes back with an enziguri so Styles Peles him right back. The Phenomenal Forearm is broken up with a superkick but the running Umaga attack hits buckles. Cue the Club to go after Jey, causing Jimmy to dive over the top and take them out. AJ hits a slingshot forearm to the back of Jimmy’s head and the Phenomenal Forearm puts Jimmy away at 6:02 shown.

Non-title. Kofi and Gotch start things off but it’s off to English inside of twenty seconds to start in on Kofi’s arm. Aiden’s running spin kick in the corner staggers Kofi but he runs English over with a clothesline. The hot tag brings in Big E. to clean house with a string of suplexes. Kofi takes out English and a quick tag sets up the Midnight Hour to pin Gotch at 2:28.

Post match the Wyatts pop up on screen to say everyone fears them and that New Day will fall.

Bob Backlund wants to review Darren Young’s goals. Darren wants to be a singles champion and then main event Wrestlemania. Backlund has wrestled at Wrestlemania and won singles titles but he’s already had his era. Now it’s time to start the Darren Young Era.

Sami wants to win so he can make a statement. He isn’t worried about Kevin Owens.

Charlotte and Dana Brooke are ready to take out Becky Lynch before showing Sasha that Charlotte is the queen because playtime is over.

Dana starts fast with some knees and shoulders to the ribs before avoiding Becky’s charge. Charlotte eats a forearm though, allowing Brooke to roll Becky up for the pin at 1:21.

Post match Becky gets beaten down until Sasha Banks makes the save.

Dean follows Seth to the ring to get on his nerves.

Dean is on commentary. Rollins scores with a shoulder to start and they pause early on. Some armdrags put Seth down and Sami gets in a nice headscissors. A right hand puts Sami outside before a clothesline takes us to a break. Back with a fight over a suplex until Rollins gets two off a Falcon’s Arrow. Seth slowly stomps away as Dean talks about not sleeping for six or seven days.

A big clothesline drops Rollins and it’s time to pound some right hands in the corner. Sami gets two off a high cross body and Seth loses an elbow pad. That’s not exactly interesting stuff so Sami gets in the Blue Thunder Bomb for two. The Helluva Kick is blocked so Seth scores with the buckle bomb. Sami counters the Pedigree and scores with the tornado DDT. Rollins bails so Sami hits the big flip dive. Not that it matters as Seth grabs the Pedigree as soon as they get back in for the pin at 8:42.

Seth and Dean brawl post match with Rollins running from the threat of Dirty Deeds. 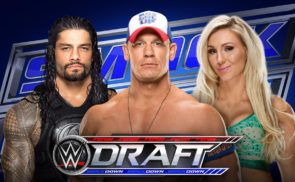 Opinion: Who Would Be Your First Pick in the WWE Draft? 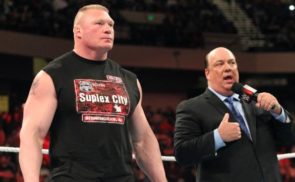 Rumor: Brock Lesnar’s Fight at UFC 200 Could Lead to a Full Return to UFC