We’re still in Toronto this week and it’s time to keep hamming home the Summerslam build. The main event this week is Randy Orton vs. Jinder Mahal because IT CAN NEVER BE OVER. Other than that we have a pair of women’s matches and Shane McMahon talking a lot because that’s what he does. Let’s get to it.

We open with a long recap of John Cena vs. Shinsuke Nakamura last week with Nakamura becoming #1 contender. It also includes Baron Corbin attacking both of them after the show and taking an AA through the announcers’ table.

Here’s Cena to open things up. After acknowledging that some fans are happy to see him while some of them aren’t, he goes over losing to Nakamura last week. Then he found out that Nakamura isn’t scared of anything and that Nakamura hits REALLY hard. They were into the match and then he remembers waking up because he had lost. No blind referee and no Montreal Screwjob (fans: “YOU SCREWED BRET!”). No, he just lost. Then he got up, dusted himself off, and shook Nakamura’s hand because he was the better man.

This brings out Baron Corbin, with new music. Cena cuts him off and calls Corbin a dumpster fire, just like someone’s sign says. Corbin teases heading to the ring but decides not to because he has the briefcase. There’s no point to Corbin going after him so he’ll take his leave. Cue Daniel Bryan, to say it’s Corbin vs. Cena at Summerslam.

Tye hammers on Jimmy to start and Jey has to save his brother from a very fast Helluva Kick. Back from a break with Jey missing a splash in the corner and Sami flipping out of a belly to back suplex for the hot tag to Tye. The ten stomps in the corner have Jimmy in trouble but everything breaks down. Sami hits a big flip dive over the top, followed by Dillinger hitting a Sky High for two on Jey. The Tyebreaker is broken up though and Jimmy kicks the knee, setting up the Tequila Sunrise to make Dillinger tap at 6:45.

Post match the Usos call out New Day so here’s Big E. for a distraction, allowing Kofi and Xavier to come in and clean house. Jey has to save Jimmy from a beating with a chair.

Orton is ready for Mahal tonight.

Apparently the aliens gave him the ability to see the future and he knows that whoever walks through that door next stole Tully the horse. This brings in……ARN ANDERSON, to ask where he can find catering. Fandango asks if he destroyed Tully and Arn admits that he did because everyone knows Arn was the hoss of the team. Arn takes some donuts and leaves, with Tyler saying their work has just begun.

We see a clip from backstage last week with Lana saying Tamina is her inspiration. Charlotte throws her down to start and seems to enjoy chopping away. Lana’s sunset flip is a complete failure and a backslide is blocked just as easily. Charlotte struts and WOO’s at her but Lana slaps her in the face. That means a big boot into the Figure Eight to make Lana tap at 2:28.

Here’s Shane McMahon to talk about being guest referee for the US Title match at Summerslam. Shane gets straight to the point and brings out Kevin Owens and AJ Styles. The boss asks Owens about what he said last week when Owens ranted about Shane being a horrible referee. Owens apologizes but suggests that Shane might screw him just like Bret Hart. Kevin: “Of course, he deserved it!” You can imagine the hatred this brings so Owens calls himself another legendary Canadian. He’s worried about AJ though because he and Shane had so many issues just back in March.

AJ doesn’t buy the idea of a McMahon as referee but Shane says he doesn’t operate like that. Owens isn’t done yet and brings up a clip from 1998 with Shane as a guest referee. He screwed Steve Austin that night and Owens says there are several other options, all available on the WWE Network.

Shane says he doesn’t trust Owens but he doesn’t recommend giving him a reason to get involved. Styles wants to forget about Shane and fight right now. That’s not cool with Owens though as he’d rather have the match in an American city that matters. A fight is about to break out with Shane getting in the middle of it, earning himself a Pele kick.

Lana is annoyed at her loss when Tamina comes in to laugh at her for wanting to be a more ravishing version of her (Tamina). The loss was bad, but now Lana is going to help Tamina get hers.

Non-title. Naomi kicks her in the head to start and hits a sliding slap to put Carmella on the floor. Back from a break with Carmella putting on a chinlock until Naomi starts fighting back with a jumping elbow and the dancing kicks. A running jawbreaker drops Carmella and Naomi goes up, only to have Carmella grab her hair. The referee pushes her away but here’s James Ellsworth from underneath the ring to shove Naomi off the top. Carmella gets in a superkick for the pin at 6:19.

Post break Natalya tells Carmella and Ellsworth to stay out of her business at Summerslam. Carmella threatens her with a cash-in.

Earlier today, Nakamura sat down with Renee Young to talk about becoming #1 contender. He’s faced top level talent in NXT and even more since he’s gotten here, but Cena has been the man for a long time. Nakamura beat him anyway and will be watching tonight’s main event. At Summerslam, the Nakamura dynasty begins.

Non-title and the Singh Brothers are gone due to injuries. Orton hammers away to start and takes it to the floor for some whips into the barricade. The belly to back suplex onto the barricade sets up a clothesline, followed by another drop onto the announcers’ table. Back in and Mahal stomps away to the biggest face pop of his career. Another clothesline sends Mahal back outside but he shoves Orton away to break up the RKO through the table. Back with Mahal dropping some knees but missing a charge into the post.

Orton gets two off a superplex and rains down some right hands in the corner. The powerslam gets two and JBL talks about Mahal being all alone like Gilligan. Mahal gets two off a jumping knee to the face but the Khallas is countered into the hanging DDT. The RKO is countered and Mahal tries another Khallas, only to have Orton reverse into the RKO for the pin at 11:45.

Orton goes to leave and gets superkicked by Rusev to end the show. 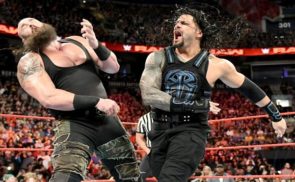 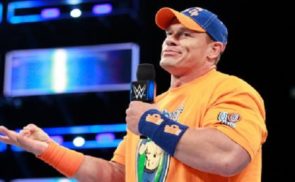 Another Match Set for “Summerslam 2017”