It’s one of the last shows before Summerslam and there’s a big main event on tap. This week will feature Roman Reigns vs. Braun Strowman in a last man standing match with Brock Lesnar in the house as well. Other than that we need a new #1 contender to Alexa Bliss as Bayley is out of Summerslam with a separated shoulder. Let’s get to it.

We start fast this week as Miz and company are in the ring for MizTV. Miz is tired of being blindsided on his own show so he wants Jason Jordan out here right now. It’s Kurt Angle instead, who has his own guest for the show: Brock Lesnar. The place goes coconuts for Lesnar and Paul Heyman, but Miz cuts Paul off because this is his show. Miz talks about how it’s almost a guarantee that Lesnar is losing the title because all three challengers are going to gang up on Lesnar. And remember, if Brock loses, he’s gone for good. If Miz is a betting man, he’s picking one of the challengers to leave as champion.

It’s time for Heyman to talk and he gets straight to the point: “Do you and your wife ever role play?” Heyman loves the idea of role play so let’s have Miz play Roman Reigns, Bo Dallas play Samoa Joe and Curtis Axel play Braun Strowman. Now let’s preview Summerslam. Three F5’s later, Lesnar calmly leaves.

Seth charges at him to start but gets knocked outside for a fireman’s carry from Sheamus. Back in and Seth slugs away to knock Sheamus outside again. Sheamus powerslams him onto the apron though and we take a break. Back with Sheamus missing a Brogue Kick and taking an enziguri to put both guys down. Sheamus pulls himself to the top but has to fight off a superkick. That’s fine with Seth who gets two off a superkick. Seth grabs the Sling Blade and heads up top for the frog splash but has to go after Cesaro. The distraction lets Sheamus grab a rollup for the pin at 8:39.

Post match Seth goes after both of them but gets beaten down. Ambrose doesn’t make a save.

Post break Rollins yells at at Ambrose in the back but Dean says he’s not helping Seth because of getting stabbed in the back three years ago. Tonight Dean will face Cesaro, alone.

Hang on a second as Axel is too banged up to wrestle. Angle isn’t happy but there’s a random wrestler nearby and Angle sends him in instead.

The LET’S GO JOBBER chants start things up. Jordan throws him down without any issue and starts with the suplexes. Goulet’s offense has no effect so the straps come down. Jordan hits the shoulder in the corner and the belly to back neckbreaker gives him the pin at 1:21.

Here’s Bayley with less emotion than you’ll ever see from her. She’s been through all kinds of emotions this week and all the messages from the fans have touched her. The fans boo Bayley out of the building and she even acknowledges it before continuing. We need a new #1 contender for Summerslam and Bayley wants it to be Sasha Banks.

Alexa comes out to do commentary to one heck of a reaction. Sasha gets sent outside early on with Emma dropping her back first onto the apron. Fox gets kicked in the face for her efforts and Emma takes her down for two. Alicia comes back and kicks away, setting up that perfect northern lights suplex for two of her own. Sasha is right back with a Shining Wizard to drop Emma and the double knees to Fox in the corner. Emma steals the cover and gets a VERY close two with the fans booing the kickout. Fox gets caught in the Bank Statement but Emma tries a rollup, only to get caught in the Bank Statement for the tap at 3:48.

Enzo Amore brings out Big Show to talk about Show knocking Big Cass out last week. Cue Anderson and Gallows of all people to say Enzo and Show haven’t won a thing. How about a match, with Anderson and Gallows having a chance to beat up two more nerds. Enzo says they look like Dr. Evil and Mini Me so the match is on.

Show throws Anderson outside to start and we take a break fifteen seconds in. Back with Enzo in trouble and not being able to get over for a tag. Cue Big Cass to distract Show, allowing Gallows to kick him in the head. Gallows kicks Enzo in the face and Anderson gets the pin at 6:38.

Cass kicks Show in the face again but Enzo dives through the ropes to take him out. Enzo gets beaten up but draws Cass into a chance, capped off by the KO Punch from Show.

Here’s Finn Balor for a chat. After some required TOO SWEET chanting, Balor talks about kicking Bray’s teeth down his neck last week. If there’s one thing Finn knows, it’s that you have to kick fear in the face….and here’s Wyatt to interrupt. Bray appears in the ring but Balor is on the top. They fight for a bit until Bray disappears, only to reappear on screen to say he enjoys Balor’s bravery.

Ambrose takes him down in a hammerlock to start as Booker compares the Rollins/Ambrose issues to being cheated on. Booker: “You ever had a girlfriend Cole?” Cole: “I’m actually married Booker. Twenty five years.” Cesaro slugs away as Booker says Cesaro wants to be a champion. After Cole yells about how Cesaro already is a champion, Booker clarifies that he meant heavyweight champion but Cole says he has no idea what Booker is talking about.

Ambrose gets in some right hands in the corner but is dropped face first onto the hook between the buckle and the post. A neckbreaker gets Dean out of trouble and he puts Cesaro on the floor for a dive. Sheamus offers a distraction though and Cesaro uppercuts Dean down as we take a break. Back with Dean breaking up a superplex so Cesaro stands on top of the post and loads up a superplex to the floor.

Since that would mean a bad case of death, Ambrose superplexes him back to the mat instead. Cesaro pops up and hits a tilt-a-whirl backbreaker, followed by some forearms to the back. An uppercut rocks Ambrose for two but he hammers away to comeback. Cesaro gets knocked to the floor but blocks the suicide dive with another uppercut for a very close two.

Another superplex is broken up and Dean grabs la majistral for two. Cesaro is right back with the Sharpshooter but Dean crawls over to the ropes for the break. Dean sends him outside for a suicide dive and both guys are down again. Back in and Sheamus offers a distraction but Dean is smart enough to ignore it and grabs a rollup for the pin at 19:15.

Post match the champs attack but Rollins immediately runs out for the save. Ambrose looks at Seth and eventually holds out the Shield fist. Rollins looks at it….but shakes his head and walks away.

We look back at Akira Tozawa defeating Ariya Daivari to become #1 contender for the Cruiserweight Title.

Titus International celebrates when Neville comes in to say Tozawa might not be getting the shot.

Titus jumps in on commentary and calls Tozawa his property. Daivari is smart enough to go after the previously bad shoulder to start, followed by a clothesline in the corner for two. Tozawa comes right back with a suicide dive to take Daivari down, followed by the snap belly to back suplex. The top rope backsplash ends Daivari at 3:51.

Roman Reigns says he retired Undertaker and he’ll be happy to retire Brock as well.

The winner faces Sasha next week for the title shot at Summerslam. Nia runs both of them over to start but misses a charge and gets knocked out to the floor. Mickie escapes a slam and gets two off a neckbreaker but Nia is getting back in. The monster wrecks everyone in sight and drops the leg on Dana for the pin at 3:04.

Goldust is ready to unveil his greatest creation in the near future.

Cass wants Show at Summerslam but he wants Enzo suspended above the ring in a shark cage. Angle makes the match and hopes Enzo isn’t afraid of heights.

Last Man Standing. Reigns meets him n the aisle but gets thrown from the floor into the ring. It’s too early for a Samoan drop as Strowman pounds Reigns down for an early five count. Reigns is sent outside and we take a break. Back with Strowman throwing the steps inside but Reigns slugs away for a breather. A pair of big boots stagger Strowman and a shot with the steps puts Strowman on a knee.

Reigns hits him in the face with the steps and Strowman goes down, allowing Reigns to hit him in the chest with the steps over and over. Back up at seven and Strowman blocks the Superman Punch by sending Reigns into the corner. That spinning Big Ending gives Braun a breather but Roman gets in a quick Superman Punch to put both guys down. Strowman is back up with a dropkick of all things but he misses a charge and hits the post, knocking him out to the floor.

Reigns gets in the apron dropkick and it’s table time. He takes too long with it though as Strowman clotheslines him down again and sets up the table in the ring. Again it takes too long though and Reigns hits a Samoan drop through the table, only to have Strowman roll outside to get on his feet. Reigns goes after him so Strowman LAUNCHES the timekeeper’s chair at him, knocking Reigns completely silly for nine.

They fight into the crowd and up to the announcers’ table with Reigns hitting another running dropkick. Strowman is up again and throws Roman into the screen. The announcers’ table is loaded up but Reigns gets to his feet for two Superman Punches. The spear is blocked with a big boot, only to have Reigns pop back up and hit the spear. Reigns pulls himself up….and Samoa Joe reaches out from the crowd to put Reigns in the Koquina Clutch. The THANK YOU JOE chant starts up and Strowman is up at nine for the win at 22:00. 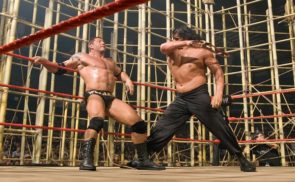 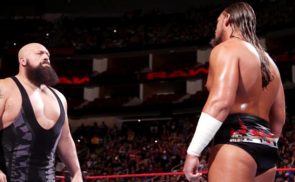