Welcome back. The wrestling world has been completely changed by the Coronavirus pandemic and that is likely to be the case for a long time to come. WWE is certainly not immune to any of the changes and they have had to make some major adjustments of their own. That includes stopping an entire wing of their brand, with a specific show not airing a new episode for several months. Another change is coming pretty soon.

One of WWE’s biggest losses since the pandemic began was NXT UK, which has not run an original episode since early April. This put several plans and feuds on hold, including several title matches. Those matches may or may not need to be replaced, but we won’t know that until they have regular shows again. Now we know when those shows are going to start back up.

Opinion: Works for me. NXT UK took its time but wound up being a heck of a show once they found their footing. The question now is can they find that footing again, as it has been a very long time since they have been running regular shows. The talent is certainly there though and that is what matters most, as it should be enough to make things work all over again.

What do you think of NXT UK? What do you want to see on the show? Let us kno win the comments below. 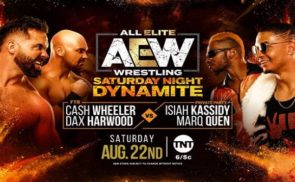 First Time Ever Gimmick Match Set For AEW All Out