Mark your calendars. The Coronavirus has changed the way sports work in American for the time being and the changes have been felt throughout the year. There are only so many ways to bring sporting events back together at the moment and we have been seeing things getting a little bit better as of late. Some of the major sports leagues have managed to come back and proceed with their regular or post seasons. One of these is going to change some things for WWE TV.

Wednesday has become one of the biggest nights of the wrestling week as NXT and AEW Dynamite go head to head. The competition has been interesting as we see which show draws a bigger audience and how they do in the demographics. Those nights have been rather intense for the last ten and a half months, but they are going to be slowed down for the next few weeks, including another date we didn’t know about.

The official USA Network schedule is listing NXT taking place on Tuesday September 2 instead of the regular Wednesday September 3. The change is due to the NHL Playoffs airing in NXT’s usual time slot, meaning this is a one off change rather than a permanent move. Dynamite has been moved around as well lately due to TNT’s coverage of the NBA Playoffs.

NXT was a big show this week. Check out how things went down:

Opinion: This is the kind of thing that has to be done every now and then and really, it is a nice feeling to not have to worry about watching both shows in a single night. It was such a relief to have a little breather this Wednesday night rather than having to jump back and forth between the two shows and then watching the rest of the show later that night. I know it won’t last, but at least we are getting a little breather for a change.

What do you think of the move? Should the shows stay on the same night? Let us know in the comments below. 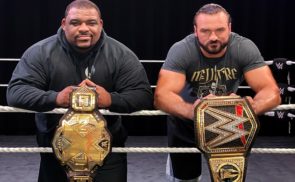