VIDEO: Undertaker Tribute From Survivor Series And Who Appeared

He’s earned the guest list. Survivor Series was designed to be built around the usual battle for bragging rights, but also over the Final Farewell of the Undertaker. This was one of the ultra rare moments in wrestling, as Undertaker was going to be making his final appearance thirty years to the day after he made his WWE debut. Not many people get to do that and it was worthy of some special treatment, which Undertaker received.

Over the course of a thirty year career, Undertaker has either wrestled with or interacted with a who’s who of wrestlers. There are very few major names he has not shared the ring with in one way or another and that is the kind of thing that should be celebrated. That was the case on Sunday, as a pretty impressive group of legends showed up to send Undertaker off in style.

Vince McMahon introduced Undertaker himself for his farewell speech.

It was an awesome night. Check out the special tribute video, set to Now That We’re Dead by Metallica:

Opinion: This is the kind of thing that had to be done right and they did things as well as they could have. Undertaker deserved this kind of a sendoff and it was great to see him getting such a treatment. He has been one of the few constants for a lot of fans over the last thirty years and it was nice to see so many legends around for such a great tribute. Well done WWE, as they do know how to do their legends right.

What did you think of the tribute? Who was Undertaker’s greatest opponent? Let us know in the comments below.

Several New Details On WWE’s Next Pay Per View 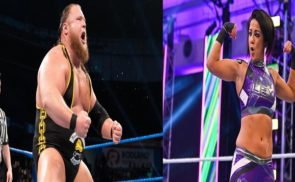