That’s a way to go. We are currently in the middle of one of the better Universal Title reigns in the championship’s still relatively young history. Back at Payback in August, Roman Reigns returned to the ring for the first time in about six months and won the title in a triple threat match. It has been a dominant reign since, and now we might know where things are going next.

Before his reign stared, Reigns turned heel for the first time in over six years, turning him into the company’s top villain overnight. Reigns has acquired Paul Heyman as an advisor and no one has been able to give him a serious challenge for his title since. He is so far ahead of so many people that there are very few names who could give him a serious challenge for the title. Now though, we might know who is coming for the belt next.

According to Wrestlingnews.co, Daniel Bryan is likely the next challenger for Reigns’ Universal Title. Bryan defeated Jey Uso, Reigns’ cousin, on this week’s SmackDown and then mentioned wanting to face Uso again when speaking on the following day’s Talking Smack. Bryan also spoke about Reigns, saying that Reigns was the one causing Uso’s problems rather than Heyman. There is no word on when Bryan vs. Reigns or another Bryan vs. Uso match would take place.

It set him off. Check out how the first Bryan vs. Uso match went down:

Opinion: This is the logical way to go as, again, there just are not that many major names who could be a serious challenger for Reigns. Bryan is one of the few names on the roster who would be seen as a threat and that makes him the more likely candidate at the moment. If Bryan can face Uso at Tables, Ladders And Chairs and then challenge Reigns at the Royal Rumble, it should be enough to get Reigns all the way to WrestleMania 37.

What do you expect from Reigns vs. Bryan? Who will take the title from Reigns? Let us know in the comments below. 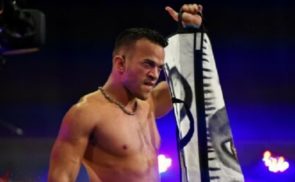