It’s that time of the year again. Yes it’s time to act like Brand Supremacy means anything, and if you factor in that NXT, which won the whole thing last year, isn’t even on this year’s show, you can understand how unimportant it is. Other than that, you also have the champion vs. champion matches, which should at least be entertaining. Well some of them at least. Let’s get to it.

This seems like it is going to be designed as the tiebreaker, but then again one of these shows has been a complete blowout in recent years so you never know how the score is going to go. A dual branded battle royal is a fine enough way to go for an opening match and I could go for something else besides a nothing match being thrown on the card for the sake of having a Kickoff Show match. It’s dual branded too, so we could have some fun here.

They’ve done this before:

I’ll take Lars Sullivan to give SmackDown the win here, as he is the current unstoppable force that they aren’t actually putting in matches at the moment. Sullivan is the kind of guy you can throw in there and have him wreck a bunch of people, but then again this is the kind of match where you’re kind of left guessing as we don’t actually know any of the entrants as of yet (though it shouldn’t be hard to figure out most of them).

We’ll start the champion vs. champion matches here with something we’ve seen multiple times already this year. Granted I can understand the idea of wanting to go with something that they know how to do, but at the same time you can only get so interesting with a match that was taking place back at Summerslam. Banks came a long way just by winning and defending the SmackDown Women’s Title, but she was rather heelish in the showdown between these two on Friday.

Give me Asuka to win here, as WWE keeps her very strong most of the time, even after Banks just finally got over the hump of not being able to defend her title. This is one of those matches where you could go either way and it’s a match that is likely going to be good, but this is the fourth time we have seen this match since July. They really didn’t have another option for this one?

This is one of the only matches on the card that has gotten any sort of a build so far and that’s kind of an interesting choice. They literally traded the Tag Team Titles and then went to their new shows, but the Profits have been champions for about eight months now, which is a near eternity among WWE tag teams these days. New Day seem like they have been champions forever, but it’s just another reign that they have are going through via their hamster wheel.

Only One Can Be Laughing:

The Profits are the better choice to go over here but I don’t know for sure that they’ll do so. New Day is the kind of a team who can absorb loss after loss (which they’ve done) and the Profits are becoming one of the better teams in recent years and while they seem destined to drop the titles to the Usos, there is no need to have them lose here. I’ll take the Profits, but this is one of the bigger coin flips on the show.

Now this one interests me, mainly because they managed to find one of the least interesting stories I can imagine for the feud: my title’s name means more than your title’s name. That’s the kind of a thing you say as a joke among other wrestling fans and then laugh it off because there is no realistic difference between the two. That being said, Zayn has made it fairly entertaining through pure talent, but that I’m not sure I can see how the match goes.

The Fight Over The Titles’ Names:

Lashley should win this and given how the two are presented, it should be complete destruction. Zayn might get in a little offense, but it should be a spear with Zayn selling it like he just got hit with a cannon. It’s not like Zayn is someone who is supposed to look strong as champion so a clean and quick loss to Lashley is not going to hurt him. If nothing else, hearing the Hurt Business brag about the win will be nice.

We have to get to these things eventually and unfortunately that means trying to remember who in the world is on which team, because these matches come and go every single year without much of note separating them. This year’s focus has been on Nia Jax putting Lana through a table over and over again while the SmackDown team only had three members until about eight hours before I started writing the preview. That’s not much to go on but that’s what we have to work with here.

So yeah somehow I think this is where Lana gets the win back, probably by being in the right place at the right time rather than doing something that makes her look important. I’d assume they’re saving Lana putting Jax through a table for Tables, Ladders And Chairs, but maybe they’ll start teasing it here. Either way, they’re going to need more than that to get me to want Lana to be some major face, but they have to start somewhere, like with her winning here.

Again, a match that wasn’t even set up until Friday and the big story is the Monday Night Raw team can’t get along to save their lives. It’s another match where everything is built around the team’s internal issues, but that doesn’t exactly make for the most thrilling match from the perspective they’re going for in the big picture. The fact that I had to look up who was on the team tells you that it’s kind of a mess, but that’s a tradition on these shows.

The Raw men win here again, mainly because they have an actual story going instead of just being five random people with no particular association on a team. It’s not a good match or anything, but Survivor Series wouldn’t be the same without some of them. Again, the action here will be fine, but I’m really not sure why this is supposed to be something that draws me into a big time match.

That leaves us with this one and it’s the match that instantly felt like something that you needed to see. I’m not wild on the idea of having one of them lose, though there are all kinds of ways to make someone look strong in defeat. That being said, I don’t know if that’s what we’re going to be seeing here as it isn’t always the case in the World Champion showdowns.

Reigns needs to win here, as even someone as awesome as McIntyre doesn’t need to be beating him. There is no reason whatsoever to have Reigns take a loss of any kind here, and hopefully WWE understands that. This is a case where the best bet would be to have a draw of some kind, but I’d bet on Randy Orton costing McIntyre the match to set up one final showdown in December. Reigns wins though, and that’s the best choice.

That gives us a final score of 4-3 to Monday Night Raw and while the total means absolutely nothing beyond Sunday night and maybe a one off feud between the people who were on the teams, WWE tends to like putting Monday Night Raw as the bigger show in general. That’s what we’re going to be seeing here again, though the problem (if I haven’t made it clear yet) is that the stakes are non-existent. Some of the matches, including McIntyre vs. Reigns, will be good, but Survivor Series has fallen down a hole when NXT isn’t there and I hope this is the last time before the make a change. It won’t be, but you have to have hope. 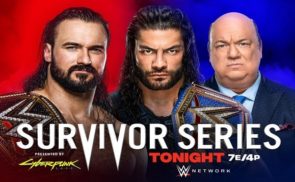