It’s one of a kind. Merchandise and memorabilia have been involved in the wrestling world for decades now and that is only going to get bigger in the future. At the end of the day, wrestling fans are going to want something in their home that they can wear, display or use in some form. Some of these things are more practical or unique than others but now we are seeing one of the more unique pieces of merchandise ever.

There are all kinds of good things going on in AEW at the moment but one of the most interesting has been the introduction of several not so well known wrestlers. Some of these stars have done some impressive things during their time in the company but there are a few who have stood out above the others. Now you can pick up a piece of their feud for a good cause.

AEW star Ricky Starks is auctioning off a body bag which he used to injure Darby Allin on the September 30 edition of Dynamite. Starks has signed the bag and the proceeds will go to the National Alliance On Mental Illness St. Tammany. The hand painted bag has the word DARBY written on it, plus a picture of Allin himself. Allin has offered to buy the bag for the sake of setting it on fire.

AUCTION: Hand painted bodybag with "DARBY" on the front. Proceeds go to NAMI St. Tammany. I had to relist this since the buyer never paid for the listing. https://t.co/jIravZzUmE

I’d buy it to set the shit on fire. https://t.co/HgiuuSiFb3

It was a cool moment. Check out the match that set up the segment:

Opinion: This is one of those cool things that you don’t often get to see and the fact that it is going to a charity makes it even better. Allin and Starks are the kind of people who are going to be the future of the company in the upcoming years and it is great to see that they are getting the chance to showcase themselves as much as they have in AEW. Hopefully the two of them get to do this for a good while, but even more hopefully, this auction helps a lot of people.

What do you think of Allin and Starks? What is your favorite piece of wrestling memorabilia? Let us know in the comments below. 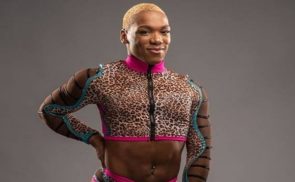