How much am I bid? Titles are one of the easiest ideas in the world of wrestling. You see someone with a shiny belt and you know that they mean something. It is an idea that has worked forever and it will continue to work for a long time to come. There have been a lot of titles over the years and some are a lot more famous than others, but in this case, someone tried to get a bit too close to one.

Independent wrestling has undergone a renaissance in recent years, as the ability to stream events has changed the way fans are allowed to see the product. This has allowed various companies to make some upgrades, including when it came to their title belts. That was the case with a certain independent company, whose title belt looked so nice that someone couldn’t keep their hands off of it.

According to PWInsider.com, Warhorse defended his IWTV Title against Zachary Wentz on Saturday night, but did not have the belt with him when the match was over. According to 411mania.com, the title belt showed up for sale on Craigslist later in the night, with a selling price of $800. There is no word on what has happened to the title since, though as of Sunday night, the listing has been flagged for removal and is no long accessible.

You might remember Warhorse. Check out his appearance on AEW Dynamite:

Opinion: It’s nice to see that the title is already taken off of Craigslist as that is nothing more than selling something you stole. I know IWTV isn’t the biggest promotion in the world but they don’t deserve to have their property stolen so someone else can profit off of the theft. Also, you have to be a pretty bad thief or desperate for money to try and sell something so unique so fast. At least wait a bit so people might not take as much notice.

What is your favorite title design? Who is your current favorite champion? Let us know in the comments below. 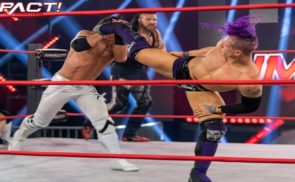