It happens to everyone. Wrestlers are an interesting breed as there has to be a certain selfishness involved to be a top star. You can only do so much without stepping on someone at least a little bit along the way. This is almost destined to cause some problems among the wrestlers at one point or another and that might be the case between two people currently on the same roster.

During this week’s SmackDown, Seth Rollins was drafted from Monday Night Raw to SmackDown. The move marked Rollins’ first time off of Monday nights since 2016, meaning that things have changed a bit since he was last there. The show now has some fresh names and it turns out that Rollins is not thrilled about one of them due to some backstage heat.

On Friday’s SmackDown Watch Along, Rollins said that he had no interest in facing Riddle in a match. According to Wrestlingnews.co, this is due to legitimate heat between the two, which started over a since deleted Instagram post from Riddle’s wife Lisa. In the post, Lisa criticized the looks of various WWE women, with a photo of Rollins’ fiance Becky Lynch included. There is no word on Matt saying anything about his wife’s comments. Matt is eligible to be drafted on Monday and it is not clear which show he will wind up on.

The heat between Seth Rollins and Matt Riddle apparently stems from this deleted Instagram post from November. pic.twitter.com/1nQrYqLj2m

There is some serious talent here. Check out both of them in action:

Opinion: I’m not sure what to make of this, but I can imagine anyone being upset by such comments. At the end of the day, Lynch was good enough to be put into the main event of WrestleMania 35 and is the biggest female star in wrestling history. That is the kind of thing that has never been done before and Lynch seems to be doing fairly well. Rollins being upset or even angry makes perfect sense, but it could be interesting to see where this goes.

What do you think of the comments? Will they ever have a match? Let us know in the comments below. 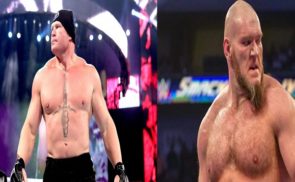