We’re less than three weeks away from Super ShowDown and that means it’s time to line up some major guest starts. We’ll likely start that tonight as Goldberg is here and is going to need a match. I’m not sure who that is going to be but I’m hoping we might get to see him face the Fiend. Let’s get to it.

Here are Miz and Morrison for the return of the Dirt Sheet. Morrison: “My name is John Morrison. My shirt has buttons but I don’t use them.” In honor of the Academy Awards, we see a clip of Once Upon A Time On The Dirt Sheet, a film which is guaranteed to win all the Slammys (it’s also rated A for AWESOME). We see a trailer featuring various cameos, including Miz’s dad, Lance Storm and Johnny Ace. Basically Miz needs to prove himself again, Morrison is back and the two of them want to show they’re better than New Day. This is all in a Once Upon A Time In Hollywood style.

Back in the ring, Morrison talks about how interesting it is that people want to talk to them now that they’re the cool kids again. Cue New Day, with popcorn buckets, to talk about how awesome the trailer was. They saw the amazing athlete in Mr. Miz and your trivia for the night: Kofi is Mr. Miz’s favorite superstar. Kofi: “That’s a shoot.”

Well yeah of course it’s this match. What else was it going to be? Roode and Jimmy exchange chops to start until it’s Jey coming in to chop as well. Ziggler gets the tag and hits a dropkick, followed by the Fameasser for two. The Zig Zag/spinebuster combination gets two on Jimmy as Jey makes the save. Jey hits an enziguri and goes up, only to have Ziggler offer a distraction so Jey can get knocked off the top in a crash.

Back from a break with Roode stomping Jey down in the corner but Ziggler gets punched in the face a few times. A kick to the jaw allows the hot tag to Jimmy as the pace picks up. The Samoan drop hits Ziggler and Roode, the latter of whom is right back with a powerslam. Ziggler takes too long loading up the superkick though and it’s Jimmy hitting one to each of them. The Superfly Splash hits knees and Ziggler gets two off a small package. The double superkick hits Roode though and now the Superfly Splash can connect for the pin at 12:33.

Nikki Cross and Alexa Bliss are ready for Bliss’ chance to become #1 contender.

We look back at Corbin getting covered with dog food last week.

Corbin storms into the production truck and the out the guy who played the tape. Agents prevent further violence.

Here’s Elias for a song. He’s facing Cesaro tonight and needs all the support he can get, so this song is called Third Time’s The Charm. After two words, here’s Cesaro to cut him off, with Sami Zayn as a bonus. Elias points out that he always gets interrupted but Sami goes on a rant about how Elias laughed when Shinsuke Nakamura lost the Intercontinental Title. Therefore, it’s time to learn a lesson.

Joined in progress with Corey’s microphone not working and Cesaro hammering away against the ropes. A Sami distraction cuts Elias off and we hit the chinlock. An elbow gets two and there’s a gutwrench suplex to keep Elias down. The chinlock goes on again but this time Elias gets up for a jumping knee to the face.  Elias’ top rope elbow is broken up with a running uppercut and the apron superplex gives Cesaro two. Elias gets fired up and stomps away in the corner. A slam sets up the top rope elbow for the completely clean pin at 7:33.

We’re ready to talk to Goldberg but here’s King Corbin to interrupt. Everyone should respect him because last week was an abomination. Roman Reigns should have lost last week, just like the 49ers lost to his Kansas City Chiefs. Reigns can’t do anything without his lapdogs because the Usos had to bail him out again.

If Reigns was as tough as he says he is, he would have fought one on one at the Royal Rumble. Then Corbin would have won and been the one headlining Wrestlemania. Corbin demands one more match with Reigns and pours a drink over a fan’s head. Cue Reigns with a Superman Punch and Corbin runs off. Reigns accepts the match and they’ll do it in a steel cage at some point. Reigns makes sure to talk to the fan who got the drink on his head.

Goldberg joins us live via satellite from Texas and gets straight to the point: he watched the Royal Rumble and it gave him the itch again. Brock Lesnar is already dealing with Ricochet and Drew McIntyre, but what about the Fiend and the Universal Title? He never got a rematch, so here’s some Breaking News from Firefly Fun House News. William Goldberg is considering challenging the Fiend and that’s bad news for Billy, because he accepts.

Mercy the Buzzard gives us the weather report: it’s going to be a cold day in h*** before the Fiend loses the Universal Title. Goldberg says he won’t be intimidated and the only thing he’s taking is the Universal Title. The Fiend is next and the fans like that idea. Goldberg leaves and Bray says that wasn’t very nice. Let him in. Bray: “Bye! See you Bill! Bye!”

Daniel Bryan is watching in the back when Heath Slater comes in. Slater recaps the Fiend going after Bryan….or maybe it was Miz. Heath reminds Bryan about the beating that he got from the Fiend and rambles on about how evil Fiend is. Bryan offers to face Slater right now and walks off, leaving Heath rather confused.

Video on Bryan vs. Fiend at the Rumble.

Slater is in street clothes. Running knee, suicide dive, missile dropkick, YES Kicks, another running knee, stomps to the head and the LeBell Lock for the win at 1:47. Commentary played up the idea of the Fiend changing Bryan.

We look at Braun Strowman winning the Intercontinental Title.

Here’s Strowman for his first comments as champion. He can’t believe this is happening because after everything he has done, he has never won a singles title. Cue Sami Zayn and Shinsuke Nakamura to demand a rematch, Strowman says they’re on but that’s not what Sami means. They’re going to use their resources for as long as they can, so here is the Revival to jump Strowman from behind. The beatdown is on but Strowman fights them off with ease but he spends too much time going after Sami, allowing Nakamura to hit Kinshasa.

Tucker helps Otis get ready for his date with Mandy Rose, including exercise (situps into a bite of pizza), clothing advise (suit jacket with the sleeves ripped off) and table manners, which results in the table being turned over. Tucker: “You’re ready.”

Crews starts fast with the kicks to the head, only to miss a charge and get Brogue Kicked for the pin at 29 seconds.

Post match Sheamus loads up another Brogue Kick so here’s Shorty G. for the save. In this case, that means some chops before Sheamus Brogue Kicks him again.

Super Showdown rundown, with Reigns vs. Corbin added to the card.

Dana Brooke vs. Carmella vs. Naomi vs. Alexa Bliss

One fall to a finish and the winner gets a shot at Bayley (ringside). Only Naomi gets an entrance and they start fast with a series of rollups, followed by Carmella being taken into the corner. Dana hits the handspring elbow and everyone goes to the floor, leaving Naomi to hit a corkscrew dive. Bayley holds up the title so Naomi shoves her down to trigger a brawl with Naomi being sent into the steps.

Back from a break with Naomi fighting back up and cleaning house, much to Bayley’s annoyance. Bliss is back in to take Naomi down, leaving Carmella to hit the Bronco Buster on Brooke. Naomi is back up with the split legged moonsault as Dana has to make a save. Brooke tries a wheelbarrow to Naomi but gets caught with a Stunner for two.

Naomi’s legdrop gets two on Bliss but she shoves Naomi off the top for two of her own. Brooke gets back on the apron so Naomi suplexes her in and hits the split legdrop for another near fall. Bliss sends Naomi into the corner but Twisted Bliss hits knees. The Rear View hits Bliss but Carmella is back in with a superkick to finish Naomi at 11:43.

So Long? NXT Star Walks Out On Company Over Possible Financial Dispute 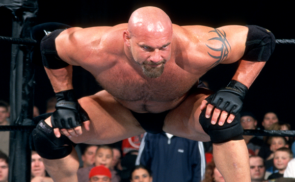 VIDEO: I’m Interested: Who’s Next For Goldberg (It’s A Big One)