The sequel. Comedy is a really hard thing to pull off in wrestling. Some wrestlers are wired perfectly for it and can find their groove in a hurry while others never quite get there. It also doesn’t help when you have someone who is stuck with an unfunny situation that only the promotion itself finds funny and no one could turn it into anything worthwhile. There is a performer in WWE who doesn’t usually have that problem though and we might be seeing more of him.

For my money, R-Truth is one of the funniest people in all of wrestling. He comes off as rather confused at times and says things where he doesn’t seem to get what is going on. It’s something that he has been doing for years now and there are no signs that he is going to be slowing down. It turns out that someone of note has seen something in his as well and we might be seeing more of them in the near future.

R-Truth was recently interviewed by With Spandex and spoke about his segment with Brock Lesnar on the January 13 episode of Monday Night Raw. According to R-Truth, Lesnar was a fan of the segment and wants to do something else with him in the future, even pitching ideas to WWE about future segments. The original segment was noteworthy for Lesnar cracking up on camera and not being able to compose himself for several moments. There has been no news of any potential segments between the two of them in the future.

This was one of the funniest things in a long time. Check out the segment that had Lesnar in stitches: 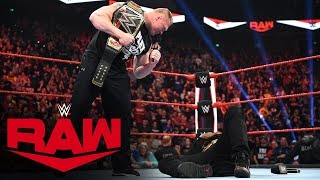 Opinion: Maybe it’s because I was in the crowd for the original segment but I’m all for seeing these two do some wacky stuff again. The biggest reason something like this could work is R-Truth is a funny guy. There’s something naturally goofy about him that makes you want to see more of him and Lesnar certainly seems to agree. They have some chemistry together so let them have some fun instead of just having Lesnar stand there looking scary for a change.

Do you like the idea of more of these two? Who is the funniest wrestler you have ever seen? Let us know in the comments below.

Not Right Now? It Turns Out NXT May Not Be Making A Rumored Change