VIDEO: I’m Interested: Who’s Next For Goldberg (It’s A Big One)

Looks like he’s next. We are in WrestleMania season but that doesn’t mean we are in the clear on the road to Tampa. With just under sixty days to go, there are a few more stops to go on the way, including Super ShowDown in Saudi Arabia. That show is not your usual major WWE event as it will feature some guest stars, including one of them in a pretty big spot.

There are a variety of legends in wrestling, some of whom become famous for a variety of reasons. Sometimes it’s being a great talker and other times it’s being a great wrestler. In Goldberg’s case, it was all about someone being a dominant force, to the point that even though he didn’t wrestle all that long, he left such an impact that you have to remember him. You can remember him again this month.

This week on SmackDown, Goldberg made his return to WWE for the first time since August 2019 and challenged the Fiend for a Universal Title match. Bray Wyatt appeared on the Titantron and accepted the challenge, with Goldberg saying that Wyatt’s mind games won’t work on him. WWE.com later announced that the match would be taking place at Super ShowDown. This will be Goldberg’s first match since Summerslam 2019 when he defeated Dolph Ziggler.

It was a heck of a challenge. Check out Goldberg and Wyatt going screen to screen:

Opinion: This could be very interesting as Goldberg is the kind of guy who runs through everyone in sight. That isn’t something he’ll be able to do to the Fiend though and that can make things all the more intriguing. If nothing else, it could be very valuable for the Fiend to shrug off Goldberg’s offense and beat him with the Mandible Claw. You don’t see that happen to Goldberg and it would be quite the coup for Fiend. 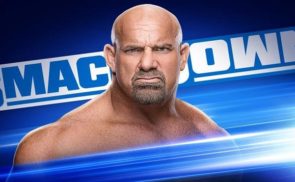 Who Are You Again? Buddy Murphy Undergoes A Surprise Name Change