KB’s Review: It Shouldn’t Be Cena

In case you haven’t watched any WWE programming lately, the main event of this Sunday’s “Night of Champions” pay per view is Brock Lesnar defending his WWE Championship against former champion John Cena. This is a rematch from last month’s “Summerslam” where Lesnar basically squashed Cena to win the title. It’s going to be the third match they’ve had on pay per view and there’s a good chance we’ll get a fourth at “Hell in a Cell” in October. The first match was great and the second was good, but this match shouldn’t be happening. At least not right now.

Even though Lesnar is the top dog in the company right now, he isn’t someone that can be treated the same as everyone else because he isn’t like everyone else. Due to a combination of his natural skills, mainstream success and unique schedule, you have to use him differently than the rest of the roster.

Above all else, Lesnar is capable of giving someone a great rub just by association. Anyone he faces is going to look like a much bigger deal just because they’re in the ring with Lesnar. This is where the idea of immediate rematches becomes a waste of Lesnar’s schedule. While the story with Cena is logical and the rematch makes sense, there are other people that could be put into the match at “Night of Champions” to get a rub from Lesnar. Cena can still have his rematch, but it doesn’t have to be the month after “Summerslam”.

The idea for Lesnar is to just build up challengers for him to knock down that month and then not deal with again. A good place to start would be with the United States Champion Sheamus. The story basically writes itself: Lesnar is the king of the fights and Sheamus loves fighting. You have Sheamus kick a lot of people’s heads off and then catch Lesnar with a Brogue Kick to stun him for a little bit. Sheamus has shown that he can have some good brawls and fight with the best of them so the match should work well.

Sheamus is just one of many potential challengers. You could have Rollins challenge him as a high flier who uses speed to get around Lesnar. Ambrose could be just one step off and mess with Lesnar’s mind. Cesaro could go into Beast Mode to fight Lesnar in another power brawl. You could give someone a submission hold that could surprise Lesnar and give the guy an opening.

Above all else, there is Randy Orton. This is a very easy story to write: Orton has asked for a one on one title shot with Lesnar for weeks now but someone keeps beating him to it. Orton is certainly a top level guy and could catch Lesnar with a quick RKO on “Monday Night Raw” to set something up. I’ve heard the suggestion of Orton wants to fight Lesnar for taking away his status as youngest World Champion ever. There are multiple ways to set this up but it’s the biggest and best opponent not named Cena on the roster.

The key here is very simple: anyone that faces Lesnar is going to be a bigger deal than they were coming into the feud. All Lesnar has to do is break a sweat and then destroy them with an F5 and everyone will be fine. It keeps Lesnar’s matches fresh and offers him a variety of people to beat. There’s also the story of so many people trying different styles against him and the next opponent trying to learn from the previous challengers’ mistakes. Lesnar can adapt as well, making the story that much deeper.

This brings us back to Cena. Lesnar has destroyed him twice and Cena only escaped the first match on a miracle shot. After the complete destruction at “Summerslam”, there is no need to have Cena get his rematch immediately. Instead Cena should take a break on the sidelines for a bit, or have another feud to build his confidence back up. In other words, WWE should cut out the stupid “cashing in my rematch clause” idea that has become a crutch for the writing staff.

At the end of the day, much like Lesnar, Cena isn’t like the rest of the roster and putting him out there against Lesnar over and over again isn’t the best way to use him. Instead you have Lesnar run through a long list of main event guys (and no, not Big Show and Mark Henry. They’ve both been done before and it would be a big waste of time to have to watch it all over again.) before Cena returns for the big showdown as the returning hero to slay the monster.

This should be basic storytelling, but since this is modern day WWE, we get the same rematches we always get with only limited thought put into the stories. Cena’s feud is far from the mess that was Triple H vs. Lesnar but this isn’t exactly lighting the world on fire. I’m not sure who is going to win on Sunday, but there’s a chance that it’s just another way to extend this feud to a third match while everyone not named Cena and Lesnar has nothing significant to do in the fall. 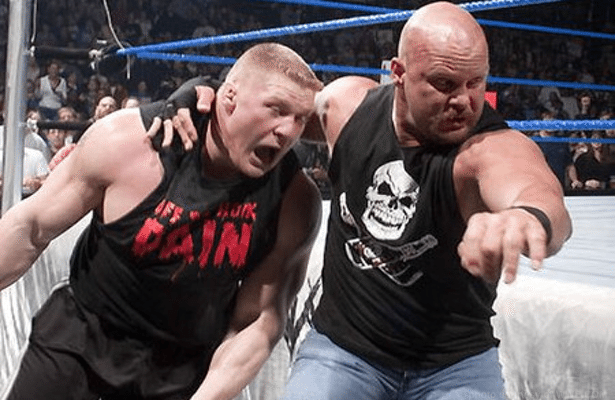 “Stone Cold” Steve Austin May Be Training For One More Match

Lance Russell May Introduce Jerry “The King” Lawler Before “Raw”