All the moves. WWE has a lot of wrestlers on its roster and those wrestlers move around a lot. That can mean various changes throughout their rosters and it can cause some situations where you might need some help keeping track of who is where. Then you have something like the annual Draft, which can make things even worse. We are halfway through the event though and that means there are details to fill in.

On Friday, WWE completed its first half of the 2019 WWE Draft. There were four rounds of picks with Monday Night Raw receiving three picks per round SmackDown receiving two picks per round. Only half of the roster was available to be chosen with the other half being available on Monday Night Raw. Here are the picks in the order, including the rounds in which they were picked:

The opening round matters most. Check out how the first set of picks went down: 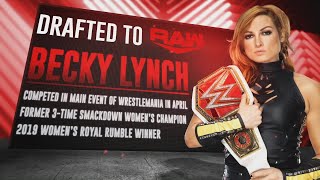 Opinion: This is one of those things where you have to keep in mind that the whole thing is not yet complete. You can only do so much with half of the roster being available, which is why the two World Champions were not drafted on the fight night. It is kind of a confusing situation but at least we could be in for an interesting second night this coming Monday, which could have a lot going on.

Which pick was the best selection? How do you see Monday’s picks going? Let us know in the comments below.