You need to have something in mind. There are a lot of wrestlers in the world today and for the first time in a long time, there are several places where they can apply their trade on a national scale. With so many of them showing up on television, there are going to be some interesting stories to tell. One big name showed up last week and now they have something else going on.

Hager is an interesting case. Check out the full interview: 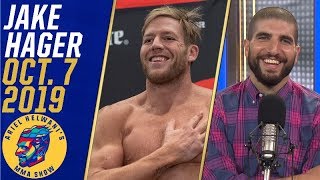 Opinion: This is something that could work out well enough in the end as Hager does not fight very often and he can try to do both at the same time. It might not be the easiest thing in the world but if Hager can pull it off, why not see how well he can do? It isn’t something that you see very often, though it would certainly be the kind of thing that would bring some attention to AEW.

Do you like think Hager can pull it off? Where will he be more successful? Let us know in the comments below.