Kevin Owens: From Stone Cold to Out Cold?

Kevin Owens was the latest WWE Superstar to become the heir apparent to Stone Cold Steve Austin. That status was not given to him by WWE necessarily, nor did the company ever imply that he was to be next top guy. But in the eyes of the fans, KO was WWE’s best shot at replicating, at least a portion, of The Texas Rattlesnake’s vibe.

But that has perhaps come to an end. Owens went from being the latest anti-authority anarchist to essentially begging to keep his job. In a matter of weeks, Kevin Owens lost his nerve and with it, any hope fans had that he would become the white hot rebel of WWE.

Vince McMahon’s company has been down this road before. From the moment that Steve Austin retired and was no longer a full-time presence on TV, WWE has tried to repeat his rise. Perhaps it was a subconscious effort on the company’s part, or maybe it was indeed intentional.

But either way, fans could see the move happening and recognized it every time. CM Punk, Daniel Bryan, Dean Ambrose and even Becky Lynch, are modern examples of Superstars who raged against the WWE machine. Each star had potential to become huge and each one did achieve a level of success. But none of them reached Stone Cold’s level in terms of having a career-defining, lasting impact on the company.

Watch Shane levy the fine against Owens on SmackDown!

Much of the reason for that has to do with their booking. Punk was only allowed to go so far, but he ran into the roadblock of John Cena, who was in his prime and on top of WWE. Bryan was given the main event nod in spite of what WWE had perhaps initially planned for him. Once injury struck, he was out of the picture and never truly regained that main event booking again.

Ambrose had the right mentality and the right gimmick for the role of WWE’s raucous renegade. But Dean was often portrayed in a silly fashion and it happened so often that eventually, fans stopped taking him seriously. Lynch has faced her own challenges with booking as well. The jury is still out on what will happen with her career in the longterm, but it’s clear that she, like every other talent on the roster, has a ceiling.

The days of one Superstar exploding and being given free rein to succeed on the main event scene appear to be over. Or is that truly the case? While it’s possible that WWE never really believed Punk, Bryan, Ambrose or Lynch would actually outperform or out-sell Steve Austin in any meaningful way, the fact is that wasn’t the point.

Stone Cold was special because of the man behind the gimmick and the company, as well as the fans, realized that. But that didn’t stop WWE from booking talents in that vigilante vein. It was obvious what the company was going for and everyone knew it.

Watch Owens try to talk Shane down on the fine!

So when Kevin Owens berated Shane McMahon on SmackDown Live and decided to fight against WWE’s corporate power structure, fans knew what was coming next. KO was going to move into the anti-authority role, the same role that Stone Cole played to perfection during The Attitude Era and beyond.

True to form, Owens unapologetically spoke his mind and began his one-man war on Shane McMahon in the process. The fact that KO even began using the Stone Cold Stunner on a regular basis only helped his cause and reinforced the notion that he was on his way to a rewind of Austin 3:16.

But almost as soon as he began on that journey, Owens’ forward progress seems to have stopped. KO was storyline fined $100,000 on August 13 and from that point on, things have taken a very interesting turn. Instead of fighting even harder against Shane and his cronies, Owens has tried appealing to McMahon’s sensible side.

This was the same KO who at one time was a heartless and devious heel, a man who betrayed every friend he ever had when it meant getting ahead. But now that Kevin Owens is a babyface, he can no longer be that fearless Superstar who never lets anyone get the best of him. Or can he?

Shane takes Owens out of the King of the Ring tournament!

It’s possible that Owens’ character is merely playing Shane right now.  Perhaps it’s all a scheme to catch McMahon unaware and when Shane believes all is well, KO will pounce. Maybe this modern day rebel must use his mind to make his mayhem. Maybe fans need to wait longer to see how all of this will play out.

Or perhaps the Stone Cold character was meant for only Steve Austin and everyone who’s come close since then has been nothing more than a tease. It’s possible that WWE never had any intention of ever replacing or mimicking Stone Cold and every effort to do so has been done for the fan’s sake. After all, The McMahon Family never beat Stone Cold but they’ve never really lost against anyone since then. Shouldn’t that have been an obvious hint?

But when fans take Stone Cold out of the equation, they’re left with KO, a Superstar that appears to have hit a wall due to nonsensical booking. It’s a place that the WWE faithful know all too well and it seems to happen far too often to ignore. Kevin Owens is in a spot in which he could have been allowed to wreak havoc on Shane, The McMahon family and WWE itself.

But instead, he’s being brought back down to earth while the corporate authority has the last laugh and he may, or may not, be able to overcome in the end. That is the narrative WWE is giving the fans. Whether or not it’s indeed a storyline or simply the bottom line, remains to be seen. 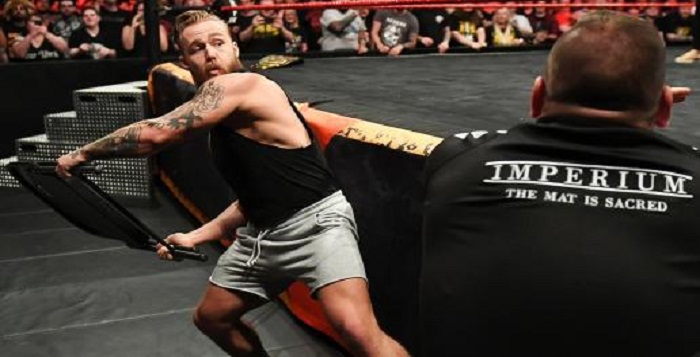