It’s Smackdown’s turn to do King of the Ring as we’re getting two more first round matches tonight. Last night’s pair of matches were pretty good so maybe Smackdown can keep up the pace. Other than that we get to find out who was behind the attack on Roman Reigns, or at least who Daniel Bryan and Rowan say it is. Let’s get to it.

Here’s Randy Orton to open things up. After a clip from last night’s attack on the New Day, Orton talks about Kofi cheating to get out of a fight with him at Summerslam. But Kofi isn’t done yet because Kofi is stupid. Last night was fun but here’s New Day’s music, with Kofi sneaking in from behind with Trouble in Paradise to drop Orton. Kofi grabs a chair and wraps it around Orton’s ankle but here’s the Revival for the save. That’s fine with Kofi, who cleans house with the chair as the villains run.

Long video on the Roman Reigns attacks. More on this tonight.

Kevin Owens comes in to see Shane McMahon, who wants to talk about the $100,000 fine. He’s had a week to think about it and now he knows how bad this is. They’re not from the same background and while $100,000 is nothing to Shane, it means his kids’ future. Shane will take it under advisement.

King of the Ring First Round: Andrade vs. Apollo Crews

Crews clotheslines him down at the bell to start (a trend in the tournament so far) but gets sent into the corner. The running knees in the corner rock Crews but he’s fine enough to dropkick Andrade out of the air. They head outside with a hurricanrana sending Crews into the steps as we take a break.

Back with Apollo hitting a pop up uppercut and grabbing an Angle Slam for two. Andrade kicks him away but misses more running knees in the corner. An enziguri into the standing sets up a standing shooting star press for two. Crews goes to pull him away from the ropes but Vega grabs the leg, allowing Andrade to hit the spinning elbow to the head. The hammerlock DDT finishes Crews at 9:53.

Daniel Bryan and Rowan bring a man whose head is covered with a towel into a locker room. He’s sat in a chair and told not to move under the threat of implied violence.

Elias is in the back and finds the disguised referee. A bit of a threat shows that Drake Maverick is hiding in a case, so Elias opens it up and grabs him by the throat. Elias makes him read a letter but grabs him by the throat. Drake: “To whom it may….do you mind?” Shane has suspended the 24/7 Rules for the night so Elias can win his King of the Ring match. Drake is placed back in the case.

It’s time for A Moment of Bliss with Alexa saying that even though they’re champions, the show will not change. It’s still going to be the show for the downtrodden and people beneath them, because it’s for everyone. Tonight’s guest is Charlotte, who thinks she should be sitting on the King of the Ring throne. Charlotte is the face of the Smackdown women’s division, though Bliss thinks it might be Bayley. It’s true that Bayley is champion but Charlotte is marketable. Can you imagine Bayley on a red carpet with her side ponytail? The division is an afterthought because Bayley is an afterthought.

Cue Bayley to say she’s tired of hearing the same things. It sounds like a bunch of excuses coming from Charlotte because Bayley is still champion. That means she’s better than Charlotte, which has to eat her up inside. Charlotte isn’t buying it because her match with Trish Stratus was all anyone was talking about at Summerslam. Bayley accepts a challenge for Clash of Champions and shoves Charlotte out of the chair. Charlotte gives her shocked face.

Roman Reigns comes in to see Buddy Murphy and wants to know who he’s lying to. Murphy says he’s telling the truth about Rowan, so Reigns threatens him with violence if he’s lying again.

Rowan is here with Bryan, meaning someone is just sitting back there quietly in a locker room. Hold on though as Bryan calls Buddy a liar and promises to show Murphy was involved in the attacks as well. Bryan knees him in the face for two at the bell but Bryan is back up with the kicks in the corner. A bite to the face keeps Murphy down and Bryan slaps him while calling him a liar. Murphy doesn’t take kindly to that and sends Bryan to the floor for the big flip dive.

Back from a break with Murphy hitting a missile dropkick, followed by the top rope Meteora. Bryan is right back with the LeBell Lock, which he then switches into Rings of Saturn to make it even worse. The leg is pulled back but Murphy slips out and gets his foot in the rope for the break. The fans are behind Buddy here as Bryan kicks away and tells him to stay down.

As you might have guessed, the big one misses but Bryan ties him in the Tree of Woe for more kicks. Bryan scores with a running baseball slide and a belly to back superplex gets two. Buddy is right back with a Cheeky Nandos kick into a running sitout powerbomb for two of his own. The running knee is countered into some strikes to Bryan’s face and a brainbuster gets two. Murphy has to superkick Rowan off the apron before hitting the big knee, followed by Murphy’s Law for the huge upset at 13:24.

Post break Murphy is about to be interviewed when Bryan and Rowan run up and attack him. Bryan keeps calling him a liar as Rowan crushes him with a boot.

Here’s a banged up Revival for a match but first they yell about New Day being cowards just like everyone here is for cheering the beating. They know Xavier Woods is still limping out of Minnesota but they want a Smackdown Tag Team Title match. Cue their opponents.

Tucker is smart by going with a bearhug on Wilder’s injured ribs. Revival gets sent outside in a hurry and we take a break. Back with Tucker swinging his arms to get out of a chinlock but getting taken down again by Dawson. The middle rope elbow misses though and it’s the hot tag off to Otis. House is cleaned with Otis dropping the Caterpillar on Dawson. Tucker gets the Thesz Press on Dawson but Wilder gets an Oklahoma Roll to pin Tucker at 6:04.

Chad Gable is used to being an underdog in the tournament because he’s been an underdog his entire life. As he is talking, Shelton Benjamin, his opponent in the first round next week, puts a sign on a door. Gable is ready to win next week and goes towards the locker room, with the sign saying “you must be this tall to participate in the King of the Ring Tournament.” Gable: “Funny.”

It’s time for MizTV with Sami Zayn as guest. Sami says he doesn’t care about the show because last night, he finally saw things clearly. Last night he found out why people like Miz always get caught up in the trap. It is the WWE trap of greed and the only path to redemption is to help other people. Yeah he’s one of the greatest alive today but there are so many people who need his help. Miz: “Like who?” Sami brings out Shinsuke Nakamura of all people, giving Miz a look like he just drank some surprisingly sour lemonade.

Miz asks Nakamura what he can get out of this but Sami calls Miz out for asking him in English. Sami talks about Nakamura being an artist and a poet who is being held back. That’s something Sami can understand and from here on out, Nakamura does not need to feel that pain. Miz asks Nakamura what is going on but Nakamura points to Sami. That’s enough of a distraction for Nakamura to lay Miz out, setting up Kinshasa to leave Miz laying.

Bryan and Rowan go in to see their mystery man and it’s time to hear what he did. Or later apparently.

Owens comes in to see Shane again because Shane remembers what he needed to say earlier. It occurred to Shane that Owens had never apologized for attacking Elias so Owens apologizes. Shane is reconsidering the fine but if Owens ever puts his hands on another official, he is fired. Owens offers a handshake but Shane isn’t there yet.

King of the Ring First Round: Elias vs. Kevin Owens

Non-title. Elias’ music now has his catchphrase at the start and sounds like him singing. Owens doesn’t waste time in clotheslining him out to the floor but Elias walks away before the big flip dive. A whip sends Owens into the barricade but he’s right back with the Cannonball for two. Cue Shane to watch from ringside as we take a break. Back with Elias holding a chinlock and throwing in a rake to the eyes for a bonus. Owens fights up and gets caught with a jumping knee to the face for two.

The chinlock goes on again but Owens gets out even faster this time, setting up a DDT. A middle rope dropkick sets up the backsplash for a quick two. The pop up powerbomb is broken up and Elias hits an electric chair into a sitout powerbomb. Elias can’t hit a superplex as Owens knocks him down but the Swanton hits knees. Owens is right back to knock Elias outside for a flip dive off the apron…and it’s Shane pulling off his shirt to reveal a referee shirt. Shane slides in as Owens’ Stunner is blocked, allowing Elias to grab a rollup with Shane counting a very fast pin at 13:12.

Reigns comes in to see Bryan and Rowan to find out who is under the hood. The hood comes off and it’s….someone who looks like Rowan plus twenty years. Nothing is said to end the show. 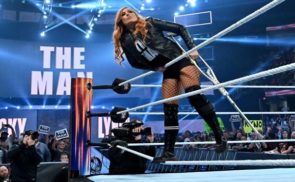