RUMOR: This is Why Brock Lesnar Entered the Royal Rumble Match at #1

Although the WWE Champion competing in the Royal Rumble is not unprecedented, with names such as Hulk Hogan and Roman Reigns both being in the match as champ, it does create some questions as to why this is occurring.

There are two major rumors regarding why Lesnar is entering as number one.

Lack of Matches for WrestleMania 36

While WrestleMania is the “granddaddy of them all,” and many major storylines are secured months in advance barring an injury, this year has been rumored to have a shortage of confirmed matches for the event.

Since there is not a person who WWE is building around to face Lesnar, the Beast is being inserted in the match, since there are also no major contenders WWE writers feel could face Lesnar at the time. Also, with Lesnar being gone since Survivor Series, WWE may have felt that there was no babyface available to quickly insert into a title picture. Ricochet was once discussed in the rumor mill, but this never gained much steam.

In addition to the lack of build for WrestleMania, which is only three months away, WWE is rumored to still not have a concrete opponent for Lesnar. As a result, placing Lesnar at number one would give the writers a possible direction on where they could go for the WWE Championship match in Tampa.

Since Lesnar will be eye to eye with several names during the match, the person with the biggest ovation standing across from him could be the person who WWE revolves a storyline around for WrestleMania. This is an odd, but interesting, way to create an impromptu focus group of over 40,000 people. However, since they have not been well-prepared to set up key matches this year, they could feel that this is the most effective way to do it. 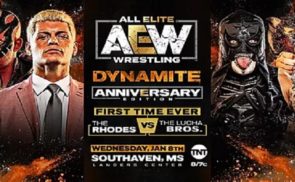