We’re in the south again this week and it’s time for Jon Moxley to make his decision about joining ethe Inner Circle. That could go multiple ways but I think you know where this is headed. Other than that, we’ll be getting a tribute to Memphis wrestling legends, which seems prime for a certain loudmouthed rich kid to come in and mess everything up. Let’s get to it.

Page, whose name graphic says he’s “not gonna pay Private Party that $12”, and Quen start things off with the fans wanting some cowboy s***. Page slugs away to start but gets sent into the corner, with Kassidy coming in for a top rope double stomp/neckbreaker combination, plus a running knee to knock Omega off the apron. An elbow to the face gets Page out of trouble and it’s off to Omega, with Page seemingly getting along with him just fine.

A backbreaker plants Kassidy so it’s already back to Page, only to have Kassidy fight out of the corner. Kassidy hits a slingshot Downward Spiral to plant Omega and it’s a double tag off to Page and Quen. A standing C4 gets two on Page with Omega having to make the save. Everything breaks down and it’s a powerbomb to Kassidy, setting up Omega’s running knee to the back for two more.

Kassidy is right back with the Silly String for two but Page loads up a powerbomb. That’s broken up with a double dropkick to send Page into Omega though and Gin and Juice gets a VERY close two on Omega. Quen gets flipped away by Omega, but it lands in a Pele on Page as Omega panics. Page is fine enough to hit a Buckshot lariat as Omega nails the V Trigger. The One Winged Angel finishes Quen at 12:25.

Post match Page and Omega seem fine but it’s Pac popping up on screen with Michael Nakazawa in the Brutalizer. Page demands his rubber match with Omega, who runs to the back.

Riho is defending but has bad ribs after last week. Brandi says that she’s more interested in having a nap than watching this match and asks if Excalibur takes his mask off to shower. Riho has to bridge out of an early cover but Stadtlander blocks a 619. The tilt-a-whirl backbreaker plants Riho for two and we take a break. Back with Stadtlander hitting a delayed superplex but here’s the Nightmare Collective at ringside. Riho gets kicked in the face but manages an elbow to Stadtlander’s face. The referee checks on her and it’s the Collective pulling Riho off the apron.

Stadtlander dives onto both of them as Brandi comes out to the ring. She and Stadtlander yell at each other but here’s the bald guy from the Nightmare Collective (identified as Luther, the Japanese deathmatch legend) to grab Stadtlander. Kong clotheslines Stadtlander down so Riho dives onto Luther instead of covering.

Back in and Riho misses the top rope double stomp, allowing Stadtlander to gorilla press her way up. That’s countered into a rollup for two, followed by Stadtlander’s Michinoku Driver for the same. Stadtlander loads up a piledriver but Kong trips her up, allowing Riho (who didn’t seem to see the interference) to get the rollup to retain at 9:35.

Post match the beatdown is on but some of the women’s roster, watching from the crowd, jump the barricade for the save.

Sammy has been saying Daniels doesn’t have it anymore so Daniels starts with a bunch of armdrags and chops in the corner. Sammy is right back with a fireman’s carry, with squats, into a Samoan drop for two. The 450 misses though and it’s a t-bone suplex to send Guevara down.

A running knee and running shooting star press give Sammy two but Daniels gets the same off a backslide. There’s a release Rock Bottom from Daniels but hang on as here’s Pentagon Jr. to show Daniels he can still do the Arabian moonsault. The distraction lets Sammy hit a jumping knee and a superkick to the back of the head for the pin at 5:49.

Result: Sammy Guevara b. Christopher Daniels – Superkick to the back of the head (5:49)

Post match it’s the Dark Order with Evil Uno saying that he’s known Daniels for fifteen years. Daniels isn’t the man he once was but they can help him with that. Uno holds up the mask but Daniels throws it back at him, meaning the big beatdown is on. SCU and the Young Bucks run in for the save. House is cleaned and Daniels hits the BME on Uno.

Arn Anderson is here with Cody and Dustin. Cody and Pentagon pose off to start so Cody sends him into the ropes. The Fear Factor and Cross Rhodes are both blocked so it’s Fenix and Dustin coming in. Dustin gets kicked to the floor for the suicide dive and Pentagon adds the top rope double stomp for two as we take a break.

Back with Dustin still in trouble but Anderson kicks a chair away from Fenix. Dustin grabs a spinebuster to set up the hot tag to Cody, who can’t quite hit a headlock takeover/hurricanrana combination. Fenix kicks Cody in the head though and grabs a rolling cutter to drop him again. The rope run kick to the head drops Cody and the Pentagon Driver nearly drops him on his head. Dustin makes the save and hits a Canadian Destroyer on Fenix. The Cody Cutter sets up the Final Reckoning to give Dustin the pin at 10:15.

Post match Arn says he and Cody will talk about MJF’s demands and get back to him next week.

Lanny Poffo talks about how great the Memphis legends are and he’s glad to be here.

Here are MJF and Wardlow with MJF wanting Cody out here right now. After giving him a ten count, it’s Diamond Dallas Page interrupting MJF instead. Page lists off his resume and we get a YOGA chant. As MJF checks his phone (so appropriate for him), Page puts over AEW and plugs his Instagram before saying people have been asking him for one more match. MJF: “ENOUGH!”

MJF doesn’t want to fight them but these guys do. Cue the Butcher, the Bunny and the Blade as MJF says Page can kiss the ring, or MJF can have one of Page’s daughters. The fight is on with Page laying out Butcher and Blade but getting kicked low by MJF. QT Marshall and Dustin Rhodes make the save.

Jungle Boy dropkicks Trent to start so it’s off to Stunt, who psyches himself up for a bit until Trent shoves him down. Stunt does his floss dance and it’s Boy coming in to put Trent down. Everything breaks down and we take a break. Back with Luchasaurus coming in to hit everyone in a hurry.

The Tail Whip hits Trent and it’s off to Cassidy to the big reaction. The slow motion kicks to the legs don’t do much to Luchasaurus but a Stundog Millionaire sends him to the floor. Cassidy hits his hands in the pockets dive but it’s Marko hitting a spinning Downward Spiral to Chuck. A Canadian Destroyer makes it worse so Stunt gets tossed onto Trent on the floor. Back in and Jungle Boy grabs a rollup for the pin at 10:42.

Here’s the Inner Circle for Jon Moxley’s answer. Moxley comes down as Jericho says he would beat up Elvis if he was here because the Beatles were way better. The car is gassed up and ready to go and Beal Street is blocked off for the Inner Circle only. Jericho asks the question so Moxley talks about how he has a lot of goals. Moxley doesn’t want a car or money but rather to dominate. That’s why he says yes, because the Inner Circle is the most dominant force in AEW. They can stand together and dominate AEW so let’s open up some of the bubbly.

Moxley asks for the car keys and is proud of having the $750,000 Ford. Sammy Guevara and Jake Hager leave but Moxley says cut the music. Moxley says he’s forgotten one thing: he’s just kidding because the Inner Circle is stupid. The only thing he wants is the World Title so Moxley breaks a bottle over Jericho’s head. Paradigm Shifts abound and Moxley, with the keys, bails before Hager can kill him. 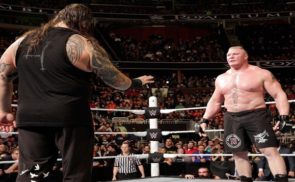 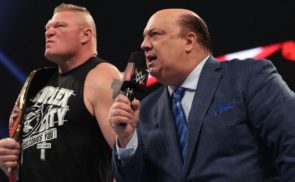 RUMOR: This is Why Brock Lesnar Entered the Royal Rumble Match at #1