That would be a big change. WWE is in a weird place at the moment as they have so many talented wrestlers on their roster that they almost have no way of presenting all of them. The company has all kinds of television time available to them but even that is not unlimited, as some wrestlers simply find television time. That might be a bit much for one rather talented wrestler.

One of the most exciting signings that WWE has had in recent years has been Ricochet. One of the best high fliers in the world today, Ricochet has seemed to be someone the fans have latched onto and care about, including down in NXT where he was a rather nice draw on live events. He has since moved up to the main roster and won the United States Title, but that might be the end of his high points with the company.

According to the WrestleVotes Twitter account, an unnamed WWE wrestler is not going to be re-signing when their contract is up in the near future. According to SoDuTw on Twitter, the unnamed WWE star may be Ricochet, whose contract was originally signed in January 2018. A standard WWE contract is for three years, meaning that Ricochet’s deal is up in about four months. Ricochet is currently in a feud with the Hurt Business.

I can’t reveal the name as that’s just not smart business, but I can very confidently say that a certain WWE talent has decided to not resign with the company once their current deal expires.

The leading person speculated that isn't re-signing with WWE seems to be Ricochet. He signed on the dotted line very early January of 2018. The standard deal is 3 years.https://t.co/06nfQsqcHe

I've received a number of messages saying that the Wrestlevotes report is indeed about Ricochet. Early days and isn't able to be formally reported yet but yeah. Absolutely no one is surprised. https://t.co/iJZgRYm9Zh

Ricochet is a heck of a star. Check out what he can do in the ring:

Opinion: This is a situation where I’ll believe it when I see it as Ricochet is a rather prominent star and someone who could be a heck of a big name in WWE. You don’t get to see talent like his all that often and WWE would be a bit insane to not put in every effort they have to keep him. Then again they haven’t given him any kind of a serious push in months now and maybe he is frustrated at what is happening.

What do you think of Ricochet? Will he leave WWE? Let us know in the comments below. 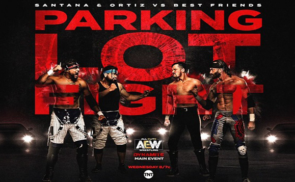