We’re back to the usual hour and a half long show on Tuesday after last week’s double shot on Tuesday and Friday. This time around we even have a special featured match with Peter Avalon vs. Brandon Cutler in a match where one of them will have a winner, unless they find a way to have a draw, as they should. Let’s get to it.

The announcers give us a quick preview.

Dustin Rhodes is here with Brandi. They fight over the wristlocks to start and Velvet seems to indicate that she is red. A shoulder taker Velvet down but she’s right back up with a leg lariat. Brandi kicks her in the face and hammers away before a low superkick gets two. The Sling Blade gets two but here is Anna Jay to stare at Brandi. The distraction lets Red hit a DDT for two but Brandi is back up with the spear. Brandi grabs Jay’s Queenslayer for the tap at 4:19.

Eddie Kingston is here too. Butcher and Blade jump them to start and the brawl is on in a hurry with all four heading outside. Back in and Garcia gets beaten down in the corner as Taz goes into his New York geography discussion of the week. Blade comes in and kicks away at Garcia’s head as commentary argues about a pen. Blackwood gets the tag and a crossbody from Butcher to go with it. Everything breaks down and it’s backbreaker into Full Death to finish Garcia at 4:19.

Kip Sabian is here too so we get into a Twitch discussion. That’s switched into a battle of the Mean Girl vs. the Super Bad Girl as commentary starts laughing at each other again. Ford chokes on the rope and catapults her throat first into the top rope for two. A gutbuster drops Jordyn and Sabian slides in the burn book so Ford can shoves the pages down Jordyn’s throat. That brings Jordyn back to life but Ford bulldogs her into the corner. A missile dropkick sets up the fisherman’s suplex to finish Jordyn at 4:32.

Ronnie isn’t a computer guy, but rather a competitive eater. Ricky Starks joins commentary for a bonus. The running shoulder into a backbreaker set up the shoulders in the corner as commentary makes car references about Cage. Ronnie gets in some kicks to the ribs and a knee to the face but Cage clotheslines his head off. A sitout powerbomb plants Cage and Ronnie….goes to grab a hot dog, which he eats while hitting a People’s Elbow for two. Cage kicks him in the face and hits a 619 into the Drill Claw for the pin at 3:09.

Starks stays on commentary. Santana cranks on Pillman’s arm to start and gets annoyed at Pillman for trying to reverse. Garrison comes in and gets his skin chopped off in the corner, followed by a superkick to put him down. A bulldog drives Garrison down and Ortiz gets two before kicking Garrison in the ribs for good measure.

Ortiz hits another clothesline and brings Santana back in for a running kick to the head. There’s a suplex into the corner but Garrison gets in a shot to the face allowing the tag to Brian for Air Pillman. Ortiz hits a sitout powerbomb into a kick to the head from Santana for the pin at 6:09.

Will Hobbs vs. Jessy Sorensen

Hobbs clotheslines him down to start and sends Sorensen to the apron. That means a kick to Hobbs’ head on the way back in but he hits a spinebuster into an Oklahoma Stampede to finish Sorensen at 1:20.

Ivelisse works on Moore’s arm to start but gets hiptossed down in a hurry. Diamante and Chanel come in with the latter hitting some armdrags, only to get pulled into a hard forearm to the face. Ivelisse is back in with a kick to the back to set up a dragon sleeper. That goes nowhere so Diamante comes back with a hard clothesline. A shot to the face allows the hot tag back to Moore though and house is cleaned in a hurry. Everything breaks down and it’s a Backstabber into a rolling kick to the face to finish Moore at 5:28.

Allie and the Dark Order are here as well. They go with the grappling to start until Marshall is headscissored out to the floor for a lecture from Allie. Back in and Cabana looks up at the Dark Order for approval and gets dropkicked down in a hurry. Marshall gets sent hard into the corner and an elbow to the head gets two.

The neck crank doesn’t last long as Marshall fights up with a flying shoulder and a top rope elbow to the face. A Lethal Combination gets two on Cabana and he counters the Flying Apple into a belly to back suplex for two. Cue Evil Uno to talk to Cabana for a distraction, allowing Stu Grayson to hit a running knee on Marshall. Cabana’s discus lariat is good for the pin at 7:03.

Neither has ever won a match around here and Leva Bates is here with Avalon. They slug it out and head outside for a bit until Cutler sends him back inside for a springboard clothesline. They head outside again with Avalon spinning around the post to avoid going head first into the steel. Avalon is sent inside but comes right back with a suicide dive. Back in and a Rock Bottom gives Avalon two and we hit a quickly broken Boston crab.

Cutler is back with a reverse inverted DDT for two so Avalon comes back with a tiger driver for the same. The split legged moonsault gives Avalon another near fall but Cutler knocks him down and hits a springboard elbow for a closer two. They both head up top and slug it out to send them both to the floor. Neither can get back in thanks to some saves from the other…and it’s a double countout at 6:45.

Chuck drives Stardom into the corner to start and hits a kick to the face to send him over for a tag. It’s off to Smiley, who gets headlocked takeoverd but a running knee takes him right back down. Trent forearms him in the corner and it’s back to Stardom, who hits a spinning bulldog out of the corner. That earns him a suplex down and everyone heads to the floor. Trent spears Stardom down and it’s Soul Food into the half and half back inside. The stuff piledriver into the piledriver gives Trent the pin at 5:36.

An atomic drop looks to set up the shooting star as everything breaks down. Quen’s leg is grabbed and it’s Grayson pulling him down for two off a crash. We hit the reverse chinlock for a bit until Quen it taken back into the corner to keep up the stomping. Uno’s brainbuster gets two with Kassidy making the save, leaving him to get out of trouble with his own with a double hurricanrana.

The Dynamite preview takes us out. 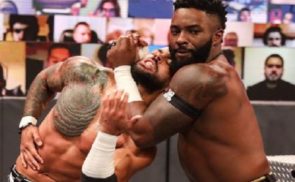 KB’s Review: We’ve All Been There