We are still dealing with the fallout from All Out and things are looking up for AEW. Last week’s show was the first time in the better part of a year that they got back to one million viewers, which is a heck of an accomplishment. Now the trick is to do it again and hopefully they can pull it off for a second time. Let’s get to it.

The Jurassic Express is here for the opening match against FTR. Hang on though as the Young Bucks come out to superkick the referee. The Bucks walk to the back and throw a stack of money at Tony Khan (I’d assume paying the fine from last week) before walking in front of FTR.

FTR, with Tully Blanchard, is defending. Dax Harwood takes Jungle Boy into the corner to start and it’s quickly off to Cash Wheeler for more of the same. It’s already back to Harwood who gets dropkicked down, with Wheeler receiving one of his own. Luchasaurus comes in and gets taken into the corner for the double teaming but some clotheslines get him out of trouble.

Harwood goes up but dives into a powerslam and it’s back to Boy. This doesn’t go well again as Boy is sent into the corner but comes back out with a double hurricanrana to send the champs outside. Back in and Wheeler hits Rick Steiner’s backdrop/powerslam for two and it’s time for an old school surfboard. The abdominal stretch stays on Boy’s ribs and Harwood comes back in for a gordbuster. Boy finally gets in a clothesline and drops Harwood, allowing the hot tag off to Luchasaurus. A double clothesline takes FTR down and it’s a chokeslam for two.

Some kicks to the head connect for two on Wheeler but he’s back up with another powerslam attempt. That’s countered into a small package for two and a crucifix gets the same on Harwood. Boy’s high crossbody connects but Wheeler rolls through for two more, even with a handful of trunks. Everything breaks down and Boy rolls Harwood up for two more. Luchasaurus is sent over the barricade and Boy dives onto Wheeler. Boy tries a sunset flip but Harwood sits down on it and Wheeler grabs his hand for the pin at 12:24.

Matt Hardy has been attacked with Private Party not being sure what happened. They were planning for the match against Jake Hager and Chris Jericho tonight and then he was laid out. Cue Jericho and Hager to wonder how bad it is, with Jericho thinking they may need to amputate.

Kenny Omega is on commentary. Page, who is no longer in a tag team, drives him into the corner to start and we get a clean break. Kazarian grabs a front facelock for two and drop toeholds him into a cravate. Back up and some shoulders go to Page, followed by a big slam. Some chops have Kazarian in trouble in the corner and Page clotheslines him off the apron. There’s the slingshot dive to the floor and we take a break.

Back with a double knockdown but Page is up with a fall away slam to put both guys down again. Page nips up and hits a running shooting star press for two. Another springboard clothesline misses though and Kazarian hits a slingshot DDT for two more. Kazarian hits an Unprettier for two and Page is right back up with a pumphandle Death Valley Driver for the same.

Page goes to the apron and gets pulled back in for a good looking slingshot cutter for a rather near fall. Kazarian’s springboard is countered into a Spirit Bomb for two and they head back outside. A clothesline drives Page against the barricade but they head back inside with Page nailing the Buckshot Lariat for the pin at 13:52.

Video on Best Friends vs. Santana and Ortiz.

Poke to the eye and Salt of the Earth finishes Dean at 6 seconds.

Post match MJF says Jon Moxley cheated at All Out and he should be the World Champion. Therefore, he is going to be known as the Undefeated Undisputed. Uncrowned World Champion of All Elite Wrestling. He even makes Justin Roberts call him such, albeit with some gusto. With that out of the way, MJF says you have to be part of a faction around here so maybe it’s time for this lone wolf to join up with someone. Even if he doesn’t though, he is still better than you and you know it.

Taz breaks down Ricky Starks’ offense, even showing the difference between the grips he uses depending on the opponent’s size.

Eddie Kingston is in the ring with the Lucha Bros with the Butcher and Blade on the floor. Kingston talks about how they are a family and that means they are going to hurt people. Butcher and Blade pulls some wrestlers over the barricade and the four of them beat all of them up. Kingston: “That was hilarious.” Kingston says that now that their house is in order, it’s time for Blade to get his house in order.

The fans sing Judas to continue the cool tradition. Tony: “JR you have to learn the lyrics to that song and we’re going to sing it on our trip back to Atlanta.” Hager takes Quen down to start but Quen jumps over him in the corner and brings Kassidy in for a reverse Sling Blade. Jericho comes in and gets sent to the apron with a dropkick sending him outside. A double dive takes Hager and Jericho down again but Hager takes over on Quen a second time.

Jericho elbows Quen in the face and it’s already back to Hager, who gets dropkicked down. The hot tag brings in Kassidy for a standing Lionsault press. Jericho is frustrated so Hager gets in a bat shot to put Kassidy down and we take a break. Back with Hager grabbing a chinlock and pounding away with some forearms to the chest. Hager even knocks Quen off the apron but he gets back up for the Silly String (Tony: “It was a desperation Silly String!”) and eventually the hot tag.

The pace picks up in a hurry with Quen hitting a springboard crossbody for two on Jericho. Hager launches Quen into the air for a super hurricanrana on Jericho before being sent outside. Kassidy ducks the Judas Effect and hits a springboard Stunner for no cover. Instead, Kassidy goes up top but misses the Swanton, allowing the Judas Effect for the pin at 13:01.

Rosa is defending, Diamante is in Ivelisse’s corner, and they both try armdrags to start. Ivelisse slaps her in the face so Rosa gives her one right back. A raised boot in the corner gets Ivelisse out of trouble and she snaps off a middle rope hurricanrana. The Gory Special goes on but Ivelisse slips out and sends her to the floor for a kick to the head.  Back from a break with Rosa hitting a delayed running dropkick against the ropes for two. The Crossface goes on but Ivelisse is out in a hurry, earning herself a Death Valley Driver. Ivelisse kicks her in the face for two but Rosa is back with a Tombstone to retain at 9:33.

Post match Diamante jumps Rosa so Hikaru Shida comes out of the crowd and makes the save. She also picks up the title and hands it to Rosa without any drama.

Miro is working out and Kip Sabian and they talk about how Miro will be the best man. The bachelor party is coming.

Here are Jake Roberts and Lance Archer, with Lance destroying someone at ringside. Jake quotes some Pink Floyd and talks about how in wrestling, you can find yourself in bed with someone you wouldn’t expect. Sometimes you need information or money or a way out, but this time they need tag team partners for a six man tag. If Roberts is going to lay in bed with the devil, it might as well be with the Tasmanian Devil.

Cue Taz, who says Team Taz is happy to do business with Archer and Roberts, though remember the deal: when Archer wins the World Title, Brian Cage gets the first shot. Archer agrees, and then he and Cage can go Godzilla. Cue Jon Moxley but Cage and Starks jump him from the crowd. Will Hobbs of all people makes the save with a chair. Moxley introduces Hobbs as his partner. Oh and they’ll need a third so Darby Allin can meet them in Jacksonville next week.

Next week: Orange Cassidy gets a TNT Title shot, plus Shida/Rosa vs. Ivelisse/Diamante.

Santana and Ortiz vs. Best Friends

This is in the parking lot in the a circle of cars. Santana and Ortiz have white face paint on, making them look like the Guerrillas of Destiny if you let some air out of them. Chuck is sent into the side of a car but Ortiz is thrown under the hood of a car for some slams down onto his back. Chuck adds a Swanton off the top onto the hood and Trent does the same. Santana is sent into a mirror to bust him open but comes back with the baton to get in a few shots.

The flying sledgehammer goes through the windshield of a car and Chuck is suplexed on top of it. Santana’s splash from the top of a truck gets two but Trent spears Ortiz through a piece of plywood. Santana is sent into the bed of a truck and there is a good bit of blood on the ground. Ortiz hits Trent with a metal dust pan Chuck suplexes Ortiz mostly through a piece of barricade but Ortiz is back with a low blow to Trent. A powerbomb onto the top of the car drops Trent again as the four of them are starting to fade.

The double powerbomb sends Trent hard through a windshield and there is some glass in his back. Chuck makes the save with a baseball bat and breaks a wooden board over Ortiz’s back. Trent pulls himself up but gets knocked down again….and Orange Cassidy pops out of a trunk with an Orange Punch (with a chain around his fist) to take out Santana. Chuck piledrives Santana on the hood of a car and Trent hits Strong Zero through plywood into the bed of a truck for the pin at 12:48.

Result: Best Friends b. Santana and Ortiz – Strong Zero into the bed of a truck (12:48)

Post match Cassidy carries them over to Sue’s van to drive them….well about a foot before Sue flips off Santana and Ortiz to end the show.

Results
FTR b. Jurassic Express – Rollup to Boy with an assist from Cash Wheeler
Hangman Page b. Frankie Kazarian – Buckshot lariat
Maxwell Jacob Friedman b. Shawn Dean – Salt of the Earth
Chris Jericho/Jake Hager b. Private Party – Judas Effect to Kassidy
Thunder Rosa b. Ivelisse – Tombstone
Best Friends b. Santana and Ortiz – Strong Zero into the bed of a truck to Ortiz 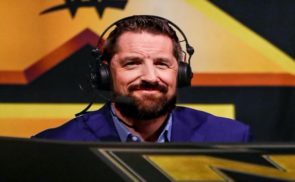