It doesn’t work for everyone. There are all kinds of wrestlers in the world today and many of them have a goal of making it to WWE one day. As the biggest and most powerful wrestling company in the world, WWE can be quite appealing to many, but that does not mean it is going to work out for everyone who makes it there. That was the case with a star who was released earlier this year and now we know a bit more about what happened.

EC3 signed with WWE in 2018 and like many others, went straight to NXT. Following a short stint in developmental, he was on the main roster in early 2019, which more or less marked the end of his time actually mattering in WWE. EC3 never broke through at any point in his WWE career, but at the same time, he was never given any significant chance to do so. There was a reason that was the case.

According to Wrestling Observer Radio, Vince McMahon gave up on EC3 after he defeated Dean Ambrose on the February 4, 2019 Monday Night Raw. The match had been designed to get EC3 over as a babyface star but the fans did not respond to it as WWE had hoped, causing McMahon to lose interest in EC3 for good. EC3 would last wrestle for WWE in November before being released from the company in April 2020. He has since debuted for Ring of Honor and returned to Impact Wrestling.

What went wrong? Check out some of EC3’s time in WWE:

Opinion: As ridiculous as this may sound, I can’t say I’m surprised by any of this. It is the kind of thing that McMahon seems to do on a somewhat regular basis and that is not a good reality. I’m not sure how you are supposed to get anything out of someone winning a match in less than three minutes. That was more or less it for EC3 and that’s a shame as he never even had the chance to showcase himself in any meaningful way. Maybe he can elsewhere, but his lack of success in WWE is not his fault.

What did you think of EC3? How is he going to do elsewhere? Let us know in the comments below. 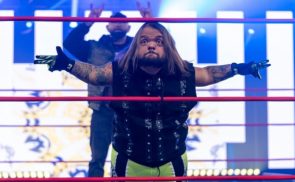