The show has taken a bit of a weird turn in recent weeks and that’s not exactly the best news. The big story this week seems to be Wrestler’s Court as Detective Dreamer continues to try and find who shot John E. Bravo. Other than that, we have the continuing issues of Eric Young and Joe Doering, because the world was waiting for more Doering. Let’s get to it.

Scott D’Amore tries to get John E. Bravo’s doctor to pull the plug but is relieved to hear that he’s in stable condition. The doctor says it might not be the same Bravo when he wakes up. D’Amore doesn’t seem crushed but promises justice.

The Stars are sisters Delmi Exo and Ashley Vox. Exo and Hogan start things off with the much bigger Exo taking her to the mat for a Gator Roll. A sunset flip gets two on Hogan, which certainly does not seem to please her. Vox comes in for a running neckbreaker and it’s off to Steelz, who suckers Vox in without much trouble. Vox’s dropkick gets two but it’s a spinebuster to give Steelz two.

The running forearm in the corner allows the tag back to Hogan for a running kick to the face. Vox slugs away and hits a running headbutt, allowing the hot tag to Exo. House is cleaned, including a northern lights suplex and some running elbows in the corner. It’s back to Vox for an Air Raid Crash for two on Hogan but Steelz cuts Vox off. A fisherman’s neckbreaker finishes Exo at 7:11.

Jordynne Grace is with her new mystery partner…..Jazz, who doesn’t think winning the tournament is going to be that hard.

Here is what is coming tonight.

The North is rather pleased that Doc Gallows is going to be out of action for 4-6 weeks. Josh Alexander isn’t sure what this means for the Tag Team Titles but Ethan Page says he has this.

And now, Wrestler’s Court with Johnny Swinger being accused of shooting John E. Bravo. Madison Rayne is his attorney as this is being presented like People’s Court, complete with voice over. Swinger: “Best house I ever drew.” Madison tells him to be quiet as we meet the prosecutor: D’Lo Brown from the Nation Of Litigation. Tommy Dreamer is judge of course (the Innovator of Jurisprudence) and he does his old pose on the way to the bench, which is an anvil case.

Madison says this isn’t fair because Dreamer was the investigator so Dreamer and Brown switch places. That means Brown gets a powdered wig and Dreamer wants the chest protector. Brown suggests that Dreamer better recognize, so Dreamer thanks the honorable Uncle Phil and starts in on his opening statement. Dreamer says this is an easy case if you look at all of the facts. Madison’s opening statement: Swinger is too stupid to have pulled this off.

We go to the first witness with Fallah Bahh, who says Swinger did it out of jealousy for not being the best man. Then Cody Deaner talks about finding the gun in Swinger’s fanny pack. Acey Romero, in a Nasty Boys shirt, says he found Swinger’s fingerprints on the gun….along with the Deaners’, Dreamer’s, just about everyone else here, Greg Valentine’s and Ron Simmons’ (Brown: “D***! Always wanted to do that.”) Swinger tries to offer Brown beer and Rayne looks ready to jump out of a window. More on this later.

Here’s Rohit Raju to complain about everyone who has been complaining about his title reign. They hide behind their keyboards like a bunch of losers, but for now it’s time for the Defeat Rohit Challenge.

Raju is defending. Hold on though as Raju doesn’t believe that it’s really Suicide because he’s smarter than that. Therefore, this one is non-title.

Non-title. Suicide starts fast with the armdrag into a dropkick but gets knocked to the floor for his efforts. Back from a break with Raju working on the mask and then elbowing Suicide down for two. Some quick choking lets Raju go for the mask again, followed by some chops against the rope. Suicide can’t get the Black Widow as Raju belly to back suplexes his way to freedom. A neckbreaker puts Suicide down and Raju gets the mask off. For some reason we don’t look at his face but here’s TJP to make the idea clear for us. The guy, whose face we still don’t see, grabs a sunset flip for the pin at 8:07.

Sami Callihan fires Ken Shamrock up but here’s Moose to say Shamrock is going after the secondary World Title. Moose respects Shamrock, but if he wins the title, Moose is coming to beat him again. Sami has to hold Shamrock back.

Kaleb With A K and Tenille Dashwood are seeing which glasses work best for her but here’s Alisha to come in and say they need to tag again. Dashwood doesn’t quite say no but she certainly doesn’t seem thrilled.

Deonna Purrazzo and Renee Michelle are the seconds here. Lee stomps away in the corner and throws Kelly down. A figure four with the legs has Kelly down again but she gets back up with a headbutt. Kelly hits a running basement dropkick in the corner but Lee is back with a tilt-a-whirl backbreaker. The Swanton finishes Kelly at 3:08.

Post match here’s Susie to say that Lee and Purrazzo hurt her friend and that’s bad. Now her friend is here to hurt them. Cue Su Yung to wreck the two of them (as Susie, albeit with her back to the ring, stands on the stage), with Purrazzo and Lee bailing.

Alex Shelley is back and the Motor City Machine Guns have a three step process: 1. XXXL, 2. The North, 3. The Good Brothers and the Tag Team Titles.

Rich Swann is sorry for what Willie Mack had to go through last week but Mack says he’s always been fighting. Chris Bey comes in to say he wants a title shot and calls Mack a loser. The threat of violence has Bey out the door.

Here’s Ethan Page to face an opponent of Karl Anderson’s choosing, but here’s Anderson for a chat first. Anderson says we’ve been having a Good Brothers Party as of late. Doc Gallows is hurt right now though because of Page so now if Page wins, the North gets a Tag Team Title shot. Anderson never rolls alone and has an opponent, who is Phenomenal. And this is what we get.

That would be the Wee-nomenal AJ Swoggle. Page gets on his knees to start so Swoggle hits AJ’s Phenomenal Blitz. A Josh Alexander distraction lets Page kick him down though and Page gets in a running shoulder as well. Page seems to load up his own Styles Clash but Swoggle bites the leg to escape. Swoggle kicks him down and after Anderson gets rid of Alexander, a rollup finishes Page at 2:28.

It’s back to Wrestlers’ Court where Rayne looks frustrated at having to question Swinger, so Dreamer gets his chance. Dreamer asks if Swinger thought he could get away with this, so Swinger brags about how awesome he is. Swinger: “I’m the OJ Simpson of professional wrestling daddy!” Dreamer asks when he last read a newspaper. Swinger: “1991 daddy. Something happen since then?” A dejected Madison says the defense rests and, after a break, Dreamer calls James Mitchell.

Dreamer asks about virgin blood, which is highly prized for its powers. That gets Dreamer’s attention, but we cut to Rosemary as the next witness (being sworn in on the Necronomicon). She won’t answer about when she was first attracted to Bravo because that’s a bit personal. Dreamer asks if she ever loved Bravo, which is a no. Of course she didn’t love him but she couldn’t resist the power of the virgin blood which would have made her the most powerful creature in the realm.

Cue Bravo, still in his hospital gown, to say Rosemary is the worst thing that ever happened to him. Bravo knows who shot him though because he could smell it. Post break, Larry D. is on the stand and Dreamer has him hooked up to a lie detector. Larry says he didn’t shoot Bravo, but Dreamer uses cologne to turn him into Lawrence D., who did in fact shoot him. Brown declares Johnny Swinger not guilty.

Joe Doering and Eric Young come in to jump Bahh for the DQ at 32 seconds.

Post match Young says this world is sick and they are the cure. Cue Rhino to go after Doering but he gets beaten down as well.

TJP comes up to Crazzy Steve and Swoggle but Brian Myers comes in to mock all three of them.

Kimber Lee and Deonna Purrazzo ask James Mitchell to turn their Su Yung problem into a Susie problem. He’ll do it, for a price.

Shamrock is challenging and has Sami Callihan in his corner. Swann rolls away to start but Sami grabs his leg so Shamrock can get in a cheap shot. That’s good for an early ejection and Swann uses the distraction to hit a dropkick. Shamrock knocks him down with a hard shot though and it’s time to work on Swann’s leg. Back up and Shamrock hits Swann in the face, because Shamrock doesn’t make things more complicated than he needs to. Some stomps to the hand keep Swann in trouble and it’s a front facelock to make it worse.

We take a break and come back with Swann hitting some clotheslines. Shamrock kicks him down though and we hit the chinlock. Swann fights up and hits a few kicks to the head with a big one putting Shamrock down. Rolling Thunder gets two and a sunset flip is good for the same, only to have Shamrock reverse into a triangle. That’s switched into a cross armbreaker but Swann’s foot is under the rope. Swann kicks away some more, only to get pulled into the ankle lock. That’s reversed into a quick victory roll to retain the title at 13:41.

Post match Sami comes back out for a package piledriver on Swann. Callihan grabs the baseball bat but here’s Eddie Edwards for the failed save attempt. The beatdown is on with Sami hitting Eddie in the face with the bat to bust him open. D’Lo Brown comes out to yell at Sami and gets taken out with the bat as well. More officials come out to yell to end the show. 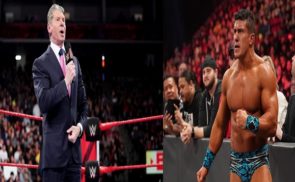 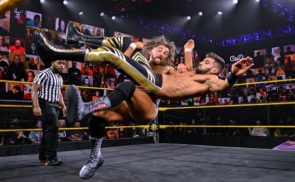