Any publicity is good publicity right? Wrestlers are not brought up in the mainstream very often and when they are, it rarely winds up going well. Sometimes it can be better than others, but more often than not, the mentions are not the most positive. Every now and then you find a wrestler who has made it into the mainstream in a more positive light, but that was not quite the case this time.

The Late Show parodied John Cena’s apology to China earlier this week on an episode of its show. Earlier this week, Cena referred to Taiwan as a country, which was followed almost immediately by an apology to China in Mandarin, even though the apology did not specify why he was apologizing. The Late Show aired a video, showing Cena’s “full” apology, including captions saying what he “really” said.

You knew something like this was coming. Check out the Late Show’s parody: 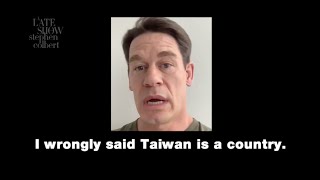 Opinion: This is a situation where Cena needs to just take what is coming to him on it and then move on. It would not surprise me whatsoever if the apology was ordered by a movie executive or Cena’s agent or someone else, with Cena being the face of the whole thing. Cena will be fine and this story will blow over sooner rather than later. It is unfortunate that it had to happen at all, but Cena is doing the right thing, at least from a business stance, by just staying quite about the whole thing.

What did you think of the parody? Will the whole situation hurt Cena in the long run? Let us know in the comments below. 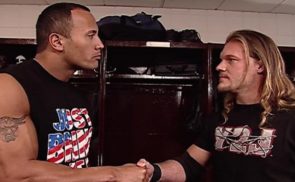 The Rock And Chris Jericho Have A Friendly Exchange 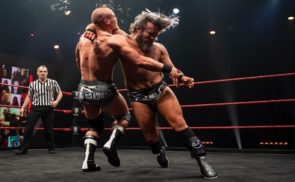