Last week’s main event was a bit of a bizarre booking decision with Angelina Love and Mandy Leon cutting off the Cinderella story of Quinn McKay, which didn’t exactly leave a lot of good feelings. We’re coming up on I believe Best In The World though so it’s time to start setting some things up. Let’s get to it.

Ian Riccaboni welcomes us to the show and runs down the card. Quinn is back next week.

This is between everyone who is currently unranked. The final two will have a singles match later, with the winner getting to choose to be ranked in the Pure or TV Title division. Dalton Castle is on commentary and only a handful get entrances. The factoids about PCO say that he last wrestled in a two winner battle royal in 1993 and he is the only person in the match to participate in the World War 3 battle royal.

Bateman jumps Bennett in the aisle and the camera keeps jumping back to their fight. Cue Dutch (Bateman’s monster friend) to run Bennett over and choke him out as the match is going on in the background somewhere. Bennett gets planted on the floor with a Boss Man Slam and is dragged towards the back (Castle: “You can’t just walk off with a human!”) but security breaks it up.

We take a break and come back with Dixon being baseball slided out. Matt Taven is carrying Bennett out, as Bateman and Dutch (the latter of whom might not have been in this in the first place) are gone too. Briscoe puts Mooney (formerly Ryan Nova) out and PCO gets rid of Martin. That gives us a PCO vs. Briscoe showdown but Danhausen breaks it up with a double chokeslam attempt….and is tossed. Hold on though as Danhausen has an El Generico mask and gets back in, earning himself another elimination.

PCO and Briscoe get to chop it out as they have long wanted to as Caballero is put out. CB goes up for no logical reason and is knocked out by Keys, leaving Briscoe to slug it out with Edwards. Keys actually tosses Briscoe, leaving Sledge to hammer it out with Edwards for a change. Edwards misses a charge and gets tossed out, leaving us with Sledge, PCO, Keys and LSG for the final four.

PCO…well they call it malfunctioning and dives through the ropes onto absolutely no one. That’s through the ropes though so he comes back in and suplexes LSG into the corner. Now we get PCO vs. Sledge for the slugout and a chokeoff (Castle: “This is good! When one of them stops breathing, the other wins!”). PCO shoves him out but LSG and Keys run up from behind for the elimination and the win at 13:40.

PCO is annoyed and leaves as the winners shake hands.

Shane Taylor Promotions (Taylor/Moses/Khan) are defending and Primal Fear is a trio who have been together for five years now. Before the match, Primal Fear say they want the titles and Taylor and company say they’re giving the new guys a chance. Moses and Matthew Omen start things off with the much bigger Moses shoving him down without much effort.

Some elbows to the face put Omen down and it’s off to Khan for a running backsplash. Adrian Soriano comes in and gets driven into the corner in a hurry. A slap to Shane’s face earns him a heck of a forearm as we take a break. Back with a headbutt sending Soriano into the corner but some double teaming lets Fear get Taylor into the corner. Gabriel Hodder comes in and stomps away with some choking mixed in for a bit of flavor. A belly to back suplex into a moonsault gives Hodder two but Shane blasts Soriano with a clothesline.

The hot tag brings in Moses to clean house and a clothesline sends Hodder outside. Khan’s gorilla press gutbuster drops Omen for two but it’s a backbreaker into a spear to give Soriano two. A step up flip dive takes Moses out on the floor but he’s fine enough to hit a fall away slam, sending Hodder over the barricade. Back in and a super Jackhammer hits Omen, setting up a 3D into a Downward Spiral to give Moses the pin at 10:17.

Silas Young has been asked about why he turned on Josh Woods. Young is a successful star on his own so why did he take Woods under his wing? He taught Woods everything he knows about wrestling but then Woods blew him off. Everything has repercussions and this is his repercussion.

Josh Woods reluctantly sits down and is asked about Silas Young. After thinking for a good while, Woods walks off without saying anything.

Young jumps Woods during the entrance and hammers away, including sending Woods hard into the barricade. Woods kicks a chair into Young’s face and we take a break. Back with the opening bell and Woods being sent throat first into the top rope. The slow beating begins with Young talking trash and hitting a stomp to the ribs off the ropes. Young says he is going to clothesline him and then clotheslines him, setting up a knee to the back.

We hit the chinlock with a bodyscissors for a bit before Woods blocks a suplex attempt. His back gives out though and Young runs Woods over again. A big boot drops Woods and we take a break. Back with Woods reversing an abdominal stretch into one of his own but Young is out in a hurry. Somehow Woods manages to pick him up with a suplex to drive him into the corner, setting up the running forearms.

A butterfly suplex gives Woods two and a bridging German suplex gets two. The Gorilla Lock is broken up so Young nails the anarchist suplex for two of his own. Woods is sent out to the apron and pulls Young out with him for the slugout. They trade forearms and trash talk until Woods throws him back inside for a wacky armbar. That’s fine with Young, who puts his feet on the ropes and pushes into a rollup for the pin at 12:06. 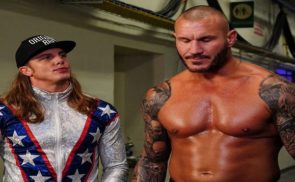