In something I feel like I have to say a lot as of late, Monday Night Raw is terrible at the moment. We aren’t going to go through every reason why as that could take weeks, but it is clear that there are a lot of problems which need to be fixed. Some of those are a lot more complicated than others, but there are still some good things about the show. They are very few and far between, though I can assure you they are there. This week, we are going to look at one of the better ones.

I know some people might not be big on them, but RKBro has become one of the most entertaining and fun tag teams that I have seen on Monday Night Raw in a long time. The latest oddball team has been together for a little over a month now and while we have not quite gotten the matching snake skin Speedos, they have come a long way in a short time. For one reason or another, the team just works and today we are going to take a bit of a closer look at them.

So back in April, Riddle beat Randy Orton in a rather snappy match on Monday Night Raw. The following week, Orton though it would be a good idea for the two of them to team together and, because wrestling, they wound up facing and defeating Cedric Alexander and Shelton Benjamin. It seemed like things were starting to click and somehow, we had a new team. The following week, they beat Jaxson Ryker and Elias in another fairly short match and….that’s kind of it.

Yeah to date, those are their only two regular tag matches together (they were on the same side in an eight man tag). I’m not sure if you can call that a regular team, but to be fair this is the same Monday Night Raw where the current Tag Team Champions won the titles in their debut match as a team. As limited as their time together has been, how many times have you heard these two talked about as a highlight of Monday Night Raw? That seems to be a pretty common theme, and it seems that it is the case for a pretty good reason: the team is awesome.

The idea of RKBro isn’t a new one. They are two people who are polar opposites but they work well together as a team and can take out a good number of opponents. That has been done all kinds of times before (Kane and Daniel Bryan spring to mind) and a lot of the time, it winds up working out well enough. Throw in some oddball exchanges backstage (Orton: “I don’t even know what planet you’re from.” Riddle: “I’m from Earth.” Orton: “Shut up.”) and you have the makings for something that could be a lot of fun, which has been the case so far.

What matters is that the two of them work well together and play off of each other so well. That is certainly the case here, as Orton seemingly can’t stand Riddle but knows that he can back it up in the ring (see the fact that Riddle beat him in April) so he has to respect him. At the same time you have Riddle, who seems to think that most of life is one big joke but can run through just about anyone he faces. That can make for a formidable team, with Orton being one of the most successful stars ever to hold up his own half.

The team looked good on paper and then they clicked even more once you put them out there on television together. There was a natural chemistry to them and it has been rather cool to see the two of them gelling together so well. Orton giving Riddle looks of “dang it he’s good” and Riddle…..well he has birds flying out of him before his matches so he is kind of harder to place. What matters though is they work well as a team and it isn’t like there are many pairs that can say that on Monday Night Raw at the moment.

The other thing that gets my attention about them is how normal of a team they have so far despite barely being in the ring together. Their two tag team matches have combined for less than eleven minutes yet it seems that they have been around for months now. It says a lot about the team that they have come together so well in such a short amount of time, to the point where there were four matches on this week’s Monday Night Raw that were longer than the two RKBro matches combined. One of those matches did feature Riddle though and he did something in Orton’s honor.

This week on Monday Night Raw, Riddle beat Xavier Woods (in a heck of a match actually) but he did it with Orton’s RKO. It is the kind of thing that fits perfectly for Riddle and Orton getting annoyed at him for it would make just as much sense. Riddle using it as a tribute to his partner worked out perfectly well and it is the kind of thing that could go either way. Orton could get annoyed at him and want to split up as a result, or in some odd way, he could find it to be charming and strengthen their bond.

That’s where things get even more interesting: you could see the team going either way. They very well could win the Tag Team Titles, as it isn’t like AJ Styles and Omos are lighting it up as champions. Orton and Riddle could make for some awesome Tag Team Champions because Orton very easily could sympathize with Riddle enough to be on top of the division for a long time to come.

At the same time, there is always a chance that Orton could return to form and lay out Riddle with a perfect RKO to set up a match with Riddle going serious to get even. A ticked off Riddle is someone who could go a long way on any show and a feud with Orton is the kind of way to launch him up the rankings in a hurry. It is the kind of thing that you could easily see WWE doing and if we get a heck of a pay per view match out of it, things will be even better.

On the third hand, there is also the chance that Riddle could be the one to turn because…..I’m sure it would involve pineapples or something. Riddle as a heel could be interesting as well, as Orton going after him but not knowing how to deal with someone as well skilled as Riddle could make for a great story. I could go for more of a Riddle push, because it has never quite taken off on the main roster just yet. This could be the start of the whole thing and that could make for a heck of a run.

Above all else, it is great to have a story that could go in a few directions but has gotten fans’ attentions right out of the blocks. You have two people who could turn this into something pretty special and they are already off on the right track. Orton and Riddle work well together and have become probably the best thing on the show in less than a month. That comes after having two matches in less than eleven minutes. What could these guys do if you give them a few months to turn them into something special? WWE has options here and that is great.

What matters is that WWE knows how to put something together that works. RKBro isn’t some revolutionary new idea, but rather something old that is being done again in a good way. There is nothing wrong with dusting off a classic and Orton and Riddle have turned in a pretty solid opening to what could be a great story. Orton needs something to do and Riddle is the kind of person who needs a nice boost. I’m not sure where it’s going, but the story could put them on a different planet. Like Earth. 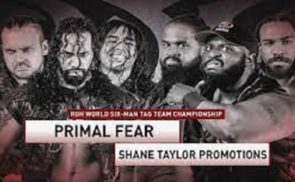 Backstage News On Why WWE Made So Many Cuts