Welcome back. With so many people under the WWE banner today, it can be rather easy to forget who everyone is and what everyone is doing at any given point. That is the kind of problem that you do not see very often, but it does have some advantages. One of the best ways to go is to have someone make a nice return without being in the arena for very long. That will be the case next week on NXT.

Over the last several weeks, NXT has been running a series of vignettes featuring Xia Li and Boa being tortured by various people, who seem to be punishing them for Shirai’s recent losses. As a result, Li has been torturing Boa in an attempt to toughen both of them up, though it is not clear where things are going to go. Now we know where things are going to go next.

A new vignette aired during this week’s edition of NXT, featuring Boa and Li having paint put onto their foreheads. The two then got up and followed a mystery woman through a curtain into a light. The words NEXT WEEK then appeared on screen, saying that the two are going to be making their return to television on the January 6 New Year’s Evil. Li has not wrestled since the October 21 edition of NXT.

Opinion: I’m not sure what this is leading towards but it is certainly an interesting story. If nothing else, it is certainly something different, which is the kind of thing that can help more than almost anything else. This could go in a variety of different ways and that is a special place to be. Hopefully we get a nice payoff to the whole thing, and it should definitely be great. 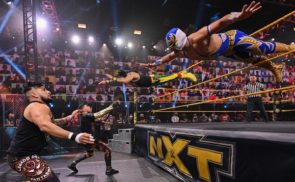