That’s A Big Role To Play. WWE Thinks It Has Its New Bruno Sammartino.

Those are some serious boots to fill. Wrestling is an industry that is heavily built on its own history. A wrestler winning or losing a match is going to mean a lot more or less depending on what their opponent has done before. Some legends are much bigger deals than others and a lot of modern legends are going to try to recreate previous glories. WWE has that in mind now but it’s going to be a lot of work.

According to Wrestling Observer Radio, new Monday Night Raw Executive Director Paul Heyman wants Goldberg to be a recreation of Bruno Sammartino in the 1980s. During the 80s, Sammartino, who was long past his prime, came in for some matches where he was treated as a major legend but rarely won anything of significance. Goldberg is currently scheduled to face Dolph Ziggler at Summerslam.

The Man is back. Check out Goldberg’s return to set up the Ziggler match: 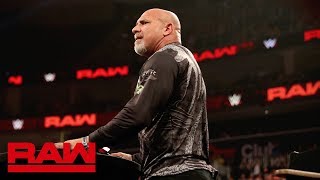 Opinion: That might be pushing it a bit as Sammartino is as big of a legend as there was in the 80s, though Goldberg does have value in this role. He can come in, run through someone, get a big reaction and leave without being exposed. That’s how you use someone like Goldberg and Heyman is smart enough to make someone like that work. You can’t recreate Sammartino, but doing what Goldberg did before is certainly possible.

Can this idea possibly work? Who could work in the role? Let us know in the comments below.