We’re still in Philadelphia and in this case we have a big time main event between a pair of brother tag teams with Rush/Dragon Lee vs. the Briscoes. These four are going to beat the heck out of each other and that’s what you want from a match between them. Other than that, we get to see what else is out there in something like this. Let’s get to it.

We open with a video on the tag match.

Young bails straight to the floor at the bell and grabs the mic. He has something to say: what has Woods done since he’s been in Ring of Honor? Woods is a multi time National Champion and should be winning titles around here. Does Woods just want to come out here and get some golf claps while cute girls hoot at him? It seems to Young that Woods has a lot of learning to do so put up or shut up. The referee takes the mic and it’s a low blow into a small package to give Silas the pin at 2:37.

We look back at last week’s street fight. Note that commentary says that we’re doing this because the previous match was shorter than expected.

Jay Lethal talks about how awesome it was to wrestle in Madison Square Garden. Going there was the coolest train ride in his life but the ride back was the worst because he lost the World Title without getting pinned or tapping out. He wants the title back.

Ryan Nova kicks Keys in the head to start and it’s quickly off to Isom to slam Caballero. Cheeseburger slaps Johnson to the floor but gets caught in the corner with Keys uppercutting away. A suplex plants Cheeseburger for two and Caballero sends him into the corner so the beating can continue.

Caballero hits Keys by mistake though (made better as they’re facing off in the Top Prospect Tournament) and it’s off to Isom to clean house. White Noise gets two on Caballero but Keys knocks him down again by mistake. With Keys and Johnson taken out, Isom and Nova hold Caballero up for a top rope double stomp from Cheeseburger for the pin at 5:50.

Kelly Klein is on commentary and this is Rivera’s TV debut. Sumie goes for the arm to start but Rivera is right back up with an armbar of her own. They trade some pinfall attempts and come back from a quick break with Sumie getting a few more near falls of her own. A Boston crab into a leglock has Rivera in more trouble until she makes the rope.

Rivera hiptosses her way out of an abdominal stretch and gets two off a bicycle kick. Smash Mouth gives Sakai two and a missile dropkick is good for the same. They slug it out until Rivera hits a spinebuster for two of her own. Smash Mouth is broken up again and Rivera sits down on a sunset flip attempt for the upset pin at 9:50.

Post match, Sakai shoves the interviewer out of the way and shakes Rivera’s hand.

Silas Young tells Josh Woods that he is doing Woods a favor.

An edgier Coast to Coast won a match on Honor Club.

It’s a brawl to start with Lee sending Mark to the floor off a hurricanrana. Jay and Rush trade flips and corner splashes, followed by Jay getting forearmed down. Lee and Mark trade kicks but Lee’s suicide dive is caught in midair for a double suplex.

We take an early break and come back with a notice that this match has been edited for content. Lee is in trouble as Mark hits a swinging suplex before handing it back to Jay for some shots to the face. A double shoulder puts Lee down again as the fans are WAY into the Briscoes here. Lee sends Mark into the corner and brings Rush in for the running slap and a nice reaction. Everything breaks down with the Briscoes being sent into the barricade a few times each.

Back in and Rush makes Jay scream off a chop, setting up a double basement dropkick. A bloody Mark comes back in and gets caught with a basement dropkick of his own. Rush and Lee hit the Tranquilo pose and we take a second break. Back again with Mark using a chair for a big springboard flip dive onto everyone. The Froggy Bow (with Mark’s face blurred for the blood) gets two on Rush with Lee making the save to a chorus of booing.

The slugout is on with Mark getting the better of it but getting caught with a reverse hurricanrana. Jay gives Lee a Death Valley Driver but Rush is back up with a snap German suplex to put everyone down. It’s Mark up with a Rock Bottom suplex and Jay loads up the Jay Driller on Rush. That’s broken up without much effort and Lee hits a running hurricanrana over the ropes to send Mark from the apron to the floor (sticking the landing). The Bull’s Horns hits Jay for the pin 13:11. 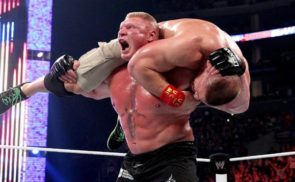 (VIDEO): Count With Them. What Are WWE’s Top Five Summerslam Main Events?

Make A Note. WWE Has Their Eye On A New Star.