It’s the go home show for Hell in a Cell and maybe that means WWE can remember to build the show a bit. Granted I wouldn’t bet on it as last year’s show only had three matches announced going into the weekend and this year’s already has four. I don’t know what the deal is with that, but at least they’re mostly consistent. Let’s get to it.

We open with the Kevin Owens Show, with Owens being rather happy to be in his new home. To make it even better, we are starting the new show with a special guest, who is one of the most technically sound wrestlers of all time: Daniel Bryan. After praising the set, Bryan talks about being really excited to be on Smackdown with all of these great, young wrestlers. He thinks it would be even better if the Intercontinental Title was defended every single week.

Owens likes the idea of titles, but wants to talk about the Tag Team Titles. Bryan is confused, but Owens says it is the one thing he hasn’t won around here. Bryan: “You’ve betrayed a lot of people.” Owens thinks they would be a great team and even has a great name for them: Team Hell KO.

Bryan points out that would be Owens and Kane, which seems to surprise Owens. Anyway, here are Dolph Ziggler and Robert Roode (Owens: “Why?”) with Ziggler speaking in Van Halen song titles. They’re a great team, so here are the Street Profits to say they want the smoke. Cesaro and Shinsuke Nakamura come out as well and the big brawl is on.

Joined in progress with Owens dropping a backsplash on Nakamura and handing it off to Dawkins. Roode comes in to drop Dawkins but misses the elbow drop, meaning it’s Dawkins belly to back suplexing Ford into a moonsault on Roode for the early two. Ziggler comes in to dropkick Ford and the villains start taking turns with the beating. Ford finally hits a dropkick for a breather, allowing the hot tag to Bryan. That means the pace picks up and Cesaro is low bridged to the floor for the suicide dive.

Back in and Bryan hits a running corner dropkick on Cesaro but may have injured his knee. Cesaro uppercuts him back out to the floor and we take a break. Back with Ziggler wrapping Bryan’s knee around the bottom rope and grabbing a half crab. Cesaro comes in for half a second before it’s back to Ziggler, who gets catapulted into the corner.

Roode cuts off the crawl to the corner and puts Bryan on the top, only to get shoved back down. A missile dropkick allows the hot tag off to Dawkins so house can be cleaned. Everything breaks down and Cesaro rolls Dawkins up with feet on the ropes…but gets caught. The referee breaks that up so it’s the Cash Out into the frog splash to give Ford the pin on Cesaro at 13:53.

And now it’s Law And Otis as Miz and John Morrison take Otis to court over the Money in the Bank briefcase. Ron Simmons is the bailiff and JBL is the judge as Miz talks about how horrible Otis has been for the briefcase. He is here to end this nightmare and put the briefcase in his own better hands. Otis says it should be his because he won the match. Miz’s attorney: “That’s a good argument.” Miz fires her.

Daniel Bryan is all fired up with the Street Profits and Kevin Owens but here’s Sami Zayn to say he doesn’t share Bryan’s vision for the Intercontinental Title. The title is Sami’s and he is going to defend it his way.

Belair puts her on top to start but Vega slaps her in the face. That earns Vega a toss off the top and Belair slams her again. Vega’s headscissors is countered with a front flip and there’s a standing moonsault into a nip up from Belair. Vega kicks her away and gets in a kick to the head, followed by a middle rope hurricanrana. Belair isn’t having that and punches her out of the air before dead lifting Vega into a gorilla press drop onto the turnbuckle. The KOD finishes Vega at 2:38.

Shorty G. is fed up with not being drafted anywhere and it’s time to right the ship. That’s why he’s calling out Lars Sullivan to prove that he belongs.

Sullivan wastes no time in hitting a fall away slam and faceplants Gable for a bonus. Gable rakes the eyes to escape a powerslam though and hits a rolling kick in the corner. A missed charge annoys Sullivan though and he sends Gable flying, followed by a hard clothesline. The Freak Accident finishes Gable at 1:57.

Seth Rollins talks about how he requested his match with Murphy tonight. In the Greater Good, everyone has a role, with Rollins being a leader. Tonight, Murphy’s role will be defined and that sounds like fun to Rollins.

Post break, Shorty G. says he’s done being a character who accepts who he is because he doesn’t accept it. He’s done being a punching bag who shows up in a public service announcement. There’s only one man who can achieve anything he wants: an Olympian, a state and national champion, and his name is Chad Gable.

Here’s Bayley with her chair for a chat. She did four interviews this morning and every time it was the same question: why is she hesitant to face Sasha Banks in the Cell? Not about her title reign or anything that she has done, but all about Sasha. Not that it matters, because she hasn’t and won’t sign the contract for Sunday.

Cue Sasha with the contract but Bayley swings the chair at her. That lets Sasha grab the title to set up a tug of war. A knee to the face drops Bayley and Sasha wraps the chair around her neck. Bayley kicks her in the head but Banks chokes her with the chair, demanding that Bayley sign. A lot of choking makes Bayley sign.

It’s back to the court room where Morrison is the current witness. Otis has assaulted a lot of people and the biggest scars are in his heart.

Rey Mysterio says Otis should get the contract because he won the match.

Asuka rants in Japanese, prompting JBL to ask the court reporter if he got any of that. Teddy Long: “Every single word.”

Tucker says Miz went too far by having Mandy Rose sent to Raw so he deserves everything that happens to him. Miz asks for permission to treat the witness as hostile, with JBL saying it’s about time. Miz asks if Otis neglected the contract so Tucker is ready to fight. Violence is teased but JBL says we’ll take a recess and be back with the verdict. Long has to go to the bathroom anyway.

Back from a break with JBL saying you have to be violent around here but Otis not cashing in yet isn’t negligent. Therefore, JBL is ready to rule in favor of….and Miz cuts him off because he has a key piece of evidence. Miz provides a briefcase, which makes JBL hear a cash register sound. Therefore, JBL rules in Miz’s favor, meaning it’s Miz vs. Otis for the briefcase on Sunday. Simmons ends it with the catchphrase.

Video on Seth Rollins vs. Murphy.

Aalyah is watching in the back. Murphy drives him into the corner to start so Rollins makes it clear that he’s the messiah. That earns him an armbar with Murphy taking it to the mat until Rollins cranks the arm back. A headlock lets Rollins talk about how Murphy is against him but Murphy hits a hard slap to the face. Murphy’s hurricanrana puts Rollins on the floor and a backdrop onto the announcers’ table takes us to a break.

We come back with Rollins knocking him off the top and out to the floor as we see Rey Mysterio and Dominick telling Aalyah to stop watching this. She can do what she wants though, which includes watching Rollins hit a gutbuster for two. Rollins’ waistlock is broken up so he puts Murphy on top, earning himself a missile dropkick.

Rollins is sent outside for a big flip dive (with Murphy almost clearing him), setting up a top rope Meteora for two. Murphy is favoring his arm after the landing though and has to go outside instead of following up. The injury sends Murphy outside to try and pop his shoulder back in, meaning Rollins can hit a suicide dive. Back in and the springboard knee to the head gives Rollins two. Rollins drives the bad shoulder into the apron and we take a break.

We come back with Rollins hitting the buckle bomb but Murphy is back with a knee to the face for two more. Murphy can’t follow up so Rollins yells some more and they slug it out until Rollins hits a step up enziguri. The Falcon Arrow gets two but the Stomp misses. Rollins goes up top but gets kicked in the face, only to slip out of a fireman’s carry. Another twist of the arm sets up the Stomp to finish Murphy at 17:31.

Post match Rollins grabs the kendo stick so Aalyah asks her dad and brother to help him. They aren’t doing it so she goes down herself as Rollins beats on Murphy with the stick. Aalyah gets in the ring and tries to cover Murphy so here’s Dominick to keep things safe. Rollins teases running but comes back in to jump Dominick, drawing in Rey for the save with a chair. That’s enough to send Rollins off for good, as the Mysterios tell Aalyah to forget this. She helps Murphy up instead.

Here are Roman Reigns and Paul Heyman to discuss the consequences for Sunday. Jey pops up on screen in Reigns’ dressing room where he eats some of his fruit. The whole family is disappointed in Roman but it’s nice to be part of the family with food and water like this. Hold on though as that’s Jimmy, who says Jey is right behind him. Jey jumps Reigns in the ring and the fight is on, with Jey grabbing a chair.

Reigns hits a big boot and takes the chair but Jey hits a superkick into the Superfly Splash to leave Reigns laying. The Usos celebrate on the ramp but Reigns grabs the mic to talk about what happens if he loses on Sunday. If Reigns loses, he stops being the Tribal Chief and the provider for the family.

Reigns can live with that, but if Jey quits, and he will, he will take orders from Reigns and respect him for what he is in the WWE and for what he does for the family. If Jey can’t, the brothers, their wives and their children are out of the family. They will all turn their backs on them, and those are the consequences. The Cell is lowered so Jey climbs up the wall to stare down at Reigns to end the show. 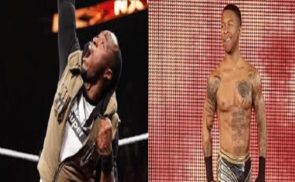