That sounds scary. It is October and that means that Halloween is going to get some extra attention. That is the case with the wrestling world as well and for once, WWE is capitalizing on the most well known Halloween themed name in wrestling history. On October 28, NXT is bringing back Halloween Havoc and now we have another rather creepy sounding match on the card.

There are a lot of odd people in wrestling and Dexter Lumis is one of the stranger going today. He barely ever speaks but draws various pictures, often showing someone in some kind of pain. Lumis also rarely feels pain and tends to have the same blank expression on his face most of the time. That isn’t someone you want after you most of the time but Cameron Grimes will have to deal with him next week.

This week on NXT, Grimes vs. Lumis was confirmed for Halloween Havoc in a Haunted House Of Terror match. There were no rules or explanations given for the match, which comes about after Grimes cost Lumis his shot at the North American Title on last week’s NXT. This is the third match announced for the card, after a pair of Spin The Wheel Make The Deal matches were confirmed.

This might not go well. Check out how Grimes reacted to the announcement:

Opinion: I’m not sure what to expect from this match but it wouldn’t surprise me to see it being some kind of cinematic match. That could go in a variety of directions, many of which could be a little less than thrilling. I’m not sure I get the appeal of Lumis, though NXT certainly seems thrilled with what he has been doing. Grimes is one of the more entertaining people in NXT though and his reactions alone could be worth seeing. 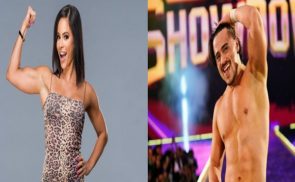