We’re finally back to normal around here after a pretty wild month that saw NXT invade and everything get turned upside down. Things have settled back down though with Smackdown coming in second place at Survivor Series. I’m not sure if that is going to make much of a difference but now it’s off to TLC. Let’s get to it.

Here’s Roman Reigns to open the show. In his house, if there are still leftovers in the fridge, it’s still Thanksgiving so Happy Thanksgiving everyone. What matters the most around this time of year are health and family and last year at this time he only had family. Things are better now and Smackdown won at Survivor Series. The NXT chants are on and Reigns says it’s all WWE, but Smackdown survived on Sunday.

Reigns thanks his teammates, but says he won’t thank the one dummy on his team. Cue King Corbin, to say it was his leadership that won the match, but Reigns says Corbin was the one who got eliminated. Corbin talks about his feast today and all of the servants he had waiting on him today. Reigns probably had a burned turkey but he’s used to eating dog food anyway, just like everyone here. Corbin can face this man instead.

Reigns sends him outside to start before hammering away in the corner. Roode is knocked outside again but Reigns glares at Corbin, allowing Ziggler to grab a leg so Roode can knock him into the announcers’ table. The spinebuster puts Reigns onto the table as well and a drive into the barricade takes us to a break. Back with Reigns kicking him in the face but walking into some boots to the face.

The Blockbuster gives Roode two but Reigns catches him with a sitout powerbomb for two of his own. They head outside with a Corbin distraction letting Roode send him into the steps. Back in and Roman Superman Punches him out of the air for two but the spear is countered into another spinebuster for two more. With nothing else working, Corbin slips Roode the scepter but Reigns spears him down for the pin at 13:41.

Post match Ziggler jumps Reigns but gets taken out. That brings in Corbin for the failed save, only to have Roode get in a scepter shot. Roode puts Reigns’ head on a chair and says something about his kids but misses the big scepter shot. The Superman Punch drops Roode to the floor for the big spear through the barricade. Ziggler tries to come after him again but gets knocked over the barricade with the steps. With Roode still underneath the barricade, Reigns turns the announcers’ table onto him.

We look back at Daniel Bryan vs. the Fiend on Sunday with Wyatt retaining.

It’s time for the Firefly Fun House with Bray being thankful to still be champion. The Fiend cuts in with a Fiend themed title but Bray is back in a hurry. Bray loves his new toy and he had a blast playing with Daniel Bryan at Survivor Series. The Fireflies seem to approve so if Bryan wants to join in, Bray can make it all change for the better. All Bryan has to do is let him in.

Sheamus is back and calls the current state of Smackdown pathetic due to all of the cowards. He sees no one with a backbone and no one like him. Smackdown is soft so now it’s time for him to return and ravage everyone in his way. Smackdown will be his.

Ali dropkicks him down to start but gets pulled off the top for a big crash. The half crab has Ali in trouble until he fights up and scores with a superkick. The tornado DDT sets up the 450 for the pin at 3:08.

Lacey has been tired for making a Thanksgiving dinner for thirty six people, including the in-laws. She wouldn’t trust these two nasties to lead the Chicken Dance at a garden party so it’s time for someone with some class to take over. We get a pretty loud LACEY EVANS chant before Lacey mocks Bayley for tapping out. Lacey taps the title so Sasha gets in her face. That’s good for a Woman’s Right and Bayley panics. Lacey leaves with a big smile.

Daniel Bryan isn’t sure if he should accept Bray’s challenge as we get the Firefly Fun House again. Huskus has eaten too much but the only thing that would make him feel better is if Bryan came and played with them. Bray tells us the real story of Thanksgiving, which was about the muscle men dancers and the reptilians throwing over humanity. It’s music video time with Bray and Huskus demonstrating the Muscle Man dance as Huskus talks about how fat he is. Bray insists that we CAN’T let the reptilians in but let him in instead. After all this, Bryan still has no answer.

Fallout from Nikki losing at Survivor Series. Hold on though because Mandy needs to say that Nikki looks like a cold plate of Thanksgiving leftovers. Sonya punches her in the face to start and hits a sliding knee for two. Trash is talked but Nikki pulls her down into a small package for the pin at 1:38.

Post match the beatdown is on but Alexa Bliss returns for the save.

The Miz talks to Bryan about what happens to people who face the Fiend and asks if that is worth it. Miz mentions Bryan’s family and gets stared out of the room.

Drake Maverick holds some mistletoe over Dana Brooke’s head. Dana: “Aren’t you married?” Maverick: “It’s complicated.” Cue the returning Elias to play a song about how he’s back for the Christmas season as Dana dances.

Here’s New Day to talk about everything they ate over Thanksgiving, including hog and….dog? That’s just a joke, but today is Black Friday so they have a deal: an open challenge for the Tag Team Titles. Now we need someone to answer the challenge though. Cue Shinsuke Nakamura/Cesaro with Sami Zayn running down the idea of Thanksgiving for being about gluttony and imperialistic evil. Sami rips on the idea of Black Friday and says it is time for some honorable men to win those titles.

New Day is defending. Cesaro shoulders Kofi to start so it’s off to Nakamura, who gets dropkicked down in a hurry. Kofi gets taken into the corner though and dropped head first onto the top turnbuckle. Sami offers a distraction on the floor and Cesaro uppercuts Kofi over the table as we take a break.

Back with Kofi making the hot tag to Big E. but the Warrior Splash misses Nakamura. Nakamura knees him in the head but walks into the Rock Bottom out of the corner for two. A kick to the face puts Big E. down and it’s Cesaro coming in with a top rope headbutt for two more. Kofi backdrops Cesaro to the floor and kicks Nakamura in the head, setting up the powerbomb/top rope double stomp combination for the next near fall.

Kofi’s launch over the top is uppercutted out of the air and another hits Big E. Kinshasa is countered into a rollup for two so Nakamura kicks Kofi in the face. A sliding….something to the face gives Nakamura two more so it’s back to Cesaro to drop Kofi across the top rope. Sami tries to use the pancake tray but gets caught in the act, meaning it’s an ejection. Trouble in Paradise to Cesaro retains the titles at 11:16.

We look back at Reigns attacking Roode earlier.

Here’s Daniel Bryan to talk about everything going on with Bray Wyatt tonight. Earlier today the Miz talked about how the Fiend will change him. Back at Survivor Series, Bryan felt the change from the people. For the last year, Bryan has talked about how the YES Movement is done, but now something has changed. So does he accept Bray’s challenge? YES he does! Cue the Firefly Fun House and Bray is very excited to get to play again but if Bryan does it again, we will see his true form. Bryan helped Bray change in the first place and the Fiend remembers that.

Oh he almost forgot: Bray promised a new face tonight and he is a man of his word. The lights go out in the arena and it’s the Fiend popping up through the ring. Bryan fights him away but gets Mandible Clawed down into the hole. Fiend pulls his hands out of the hole and has a bunch of hair in his hands. He does it again with a bunch of hair being left on the mat and the laughter ends the show. 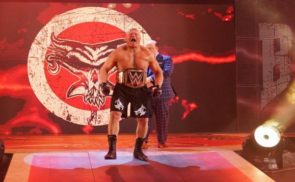 When Can We Expect To See Brock Lesnar Back On WWE Programming? 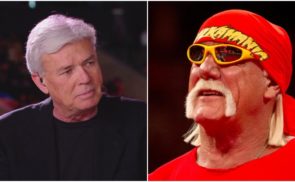