The other boss knew. There are some names that are absolutely iconic in wrestling. Almost anyone, either a wrestling fan or not, knows who you mean when you bring up Steve Austin, The Rock or Hulk Hogan. While there are a lot of factors to that, one of the biggest reasons is their names. You instantly get the idea of those characters and that can be a huge positive. The names can also be a negative though, and someone seemed to know that this year.

There has never been a tag team as dominant as the Road Warriors/the Legion of Doom. They ran roughshod over everyone that they faced with almost no one being able to lay a finger on them. That is a formula that is always going to work and wrestling companies have tried to make it work ever since. WWE has a team that could come close to it, but a name change almost took them down.

Erik of the Viking Raiders was a guest on this week’s edition of the After the Bell podcast and talked about the team’s name changes in WWE. The team came into the company after being known as War Machine elsewhere. They were then known as the War Raiders in NXT, with the name changing to the Viking Experience for their Monday Night Raw debut. Erik spoke about the team being disappointed in their new name, which resulted in Triple H shaking his head and telling them to go talk to Vince McMahon. The Viking Experience name was used anyway and then the next week McMahon agreed to the Viking Raiders.

This didn’t work. Check out the debut under the second name: 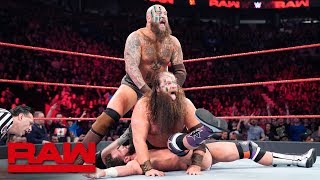 Opinion: Can you blame Erik and Ivar for not exactly being happy with this one? The Viking Experience is one of the lamest names that WWE has ever come up with and that is covering a lot of ground. The Viking Raiders isn’t much better of a name, but it is a lot better than what they had before. You would think someone would have thought this through, but how many times has that been said about WWE before?

Which name is best? What should their name be? Let us know in the comments below.