Summerslam is getting closer and closer but at the same time we have a lot to do on the way there. That includes a pair of title matches this week as AJ Styles defends the Intercontinental Title against Gran Metalik and Nikki Cross gets another shot at Bayley’s Smackdown Women’s Title. Let’s get to it.

Nikki says her confidence was in the gutter after Extreme Rules but last week she beat Alexa Bliss, who is better than Bayley and Banks.

Big E. says Xavier Woods and Kofi Kingston are in his heart and mind. Tonight, Miz feels the power.

Miz isn’t worried about Big E. having a singles career. John Morrison thinks it sounds like a bad spinoff.

Lacey Evans is ready for the nasty Naomi.

AJ Styles is ready to teach Metalik a lesson.

We go to the Firefly Fun House where Bray Wyatt has a snorkel because he was looking for Braun Strowman. Though maybe the alligators have already eaten Braun. All Bray ever wanted to do was save Braun but now HE is awake and HE wants something Braun has. Until HE gets it, none of you are safe. Let him in.

Metalik is challenging and has Lince Dorado with him. AJ drives him into the corner to start and we’re at an early standoff. Some kicks to the ribs take Metalik down and Styles sends him face first into the buckle. There’s a suplex for two and AJ whips him hard into the corner but misses an elbow.

Metalik sends him outside and cuts AJ off at the legs. A running hurricanrana off the apron takes AJ down and we take a break. Back with Metalik hitting a high crossbody but a monkey flip is blocked. AJ starts in on the leg by cranking away on the mat, including a half crab to send Metalik to the rope.

Metalik slips out of the fireman’s carry neckbreaker and snaps off a tornado DDT for a hotter than expected near fall. There’s the rope walk dropkick for two more but AJ is right back with the Phenomenal Blitz. The Phenomenal Forearm misses though and Metalik hits an enziguri for the double breather. Metalik walks the ropes again but AJ knocks him out of the air. The Calf Crusher makes Metalik tap at 14:24.

Post match Dorado checks on Metalik and gets taken out with the Styles Clash.

King Corbin comes up to Shorty G. and talks about how overlooked Gable has been. All of the short jokes were there to motivate him, and he can do that against Matt Riddle tonight. Gable seems to think about things. As usual, it’s amazing how much all of the energy that opener put together goes away as soon as Corbin shows up.

We look back at the bar fight last week.

Here’s Hardy for a chat. Jeff has not felt this good in a long time and knows that, as a fan shouts, Sheamus sucks. Last week was a reminder that he is on the right path. It’s true that he is an alcoholic but he is also a loving husband and a WWE star. That is what makes him never want to let anyone down again and he is fighting the struggle every day. Cue King Corbin to say enough about the sobriety stuff.

What is going on around here? Hardy is standing in the ring talking about how tough things is so suck it up and deal with it. Corbin has to deal with that idiotic Matt Riddle who can’t keep his shows and tonight he has to face Drew Gulak. Hardy says maybe Corbin is the real problem but Corbin thinks Hardy is more concerned about sitting in a circle, talking about the twelve steps and collecting coins. Gulak jumps him from behind and we’re off. Well after a break that is.

Joined in progress with Gulak working on the arm and throwing Corbin down. A stomp to the arm sets up the hammerlock as Corbin is sent into the corner. Corbin right hands him out of the corner though and Gulak is rocked in a hurry. It’s off to a half crab on Gulak, with Corbin turning it into the middle of the ring.

That’s reverses into a YES Lock but Corbin gets out and reaches the rope. Some running dropkicks have Corbin in trouble and Gulak adds a top rope clothesline for two. Corbin is back with Deep Six but here’s Matt Riddle for a distraction, setting up a small package for two. Not that it matters as the End of Days finishes Gulak at 5:12.

Post match Riddle runs in and goes after Corbin but Shorty G. runs in with a suplex to Riddle and a smile to Corbin.

John Morrison is here with Miz while Big E. is alone, as commentary makes very clear. Miz gets driven into the corner so Big E. can hit the hip swiveling. Then it’s a fireman’s carry into more swiveling, setting up the spanking abdominal stretch. Miz gets out and slaps him in the face for some reason, which doesn’t go well. They head outside with Miz being sent into various things but Morrison hits a flipping kick off the steps.

Miz gets in a kick to the face and it’s a top rope ax handle back inside. Big E. powers out of a chinlock and sends him to the apron for a clothesline. The apron splash misses though and we take a break. Back with Big E. fighting out of another chinlock but getting kick in the face for two. Big E. is back up again with some belly to belly suplexes into the Warrior Splash. The Big Ending and Skull Crushing Finale are blocked so Miz hits the DDT for two more. There are the YES Kicks but Big E reverses one into a failed powerbomb attempt.

Miz kicks the knee out and kicks away at it in the corner. Some running knees are countered into a not great Rock Bottom out of the corner but the spear through the ropes is countered with another knee. Morrison gets on the apron for a kick to the head though and the Skull Crushing Final gets two. Miz grabs the Figure Four but Big E. gets over to the rope. Morrison teases another kick but gets caught this time for an ejection. Miz panics for a good while and gets rolled up for two, followed by a Stretch Muffler of all things to make Miz tap at 14:00.

Cesaro and Shinsuke Nakamura are celebrating when Lucha House Party comes in. They seem interested in a title shot but Cesaro makes fun of Metalik for choking.

Sheamus talks about making the mistake of fighting Jeff Hardy in a bar. No matter how many bottles Sheamus broke over his head, he knew Hardy was fueled by alcohol. Hardy is no longer his problem and that’s bad news for Smackdown. Now, he is the locker room’s problem.

Before the match, Lacey promises to make everyone feel sorry for Naomi when she beats her again. Lacey takes her into the corner to start and goes to tie Naomi’s hair around the rope. That’s broken up as Naomi tries a hurricanrana, earning herself a powerbomb. Naomi’s back is bent around the post with Lacey pulling on the hair, followed by a hard posting.

Lacey traps the hair in the steps but Naomi beats the count and knocks her outside again. Naomi tries a sliding….I want to say sunset bomb or Canadian Destroyer but she loses Lacey on the flip and sends her flying instead, with Cole even asking what the heck that was. Back in and Lacey ties the hair into the ropes again but this time Naomi comes out with a backslide for the pin at 3:18.

Otis and Mandy Rose are here and have plans for a date, with Mandy making some suggestive statements involving food. They’ll be ready in a few minutes but Sonya Deville looks on.

Post break Sonya jumps Mandy and covers her face with makeup. She cuts off a bunch of Mandy’s hair too while screaming about wanting to ruin Mandy’s life. Sonya grabs some electric clippers but referees come in for the save.

After a quick chat from commentary on what we just saw, Heavy Machinery comes in to check on Mandy. Miz and Morrison come int o ask where the adults are because Mandy now looks like a soccer mom. Miz: “Rest asheered, we will take care of this.” Morrison: “Don’t cut it short.” Otis glares them off.

We recap Bayley vs. Nikki Cross, which included Bayley beating her at Extreme Rules and injuring her ribs.

Bayley is defending and Sasha Banks and Alexa Bliss are the seconds. Cross starts fast by knocking Bayley around and hitting a monkey flip. The Purge is broken up so Nikki slams her head first into the mat over and over. Bayley is back with a shot in the ropes but Nikki sends her outside in a crash as we take a break. We come back with Bayley running Nikki over and sending her into the buckle. A belly to back suplex drops Nikki on her head for two but a shot to the throat gets her out of trouble.

There’s a tornado DDT for two on Bayley and a reverse DDT onto the apron has her in more trouble. Back in and Nikki gets two off a Regal Cutter but Bayley snaps her throat first across the rope. Bayley goes over to the announcers’ table to mock Nikki’s dance for reasons of general cockiness, allowing Nikki to take her down by the leg. A dropkick through the ropes takes Sasha down and they fight over some rollups for two each. Bayley pops back up and hits the bulldog driver to retain at 10:30.

Post match Bayley and Banks leave and the copyright comes up but we stay with Bliss trying to help Nikki up. Nikki says no and shoves her down before leaving on her own. Cue the Fiend of all people to kneel next to Bliss and hold out his hand, which she looks at while shaking her head. Fiend Mandible Claws Bliss to end the show. 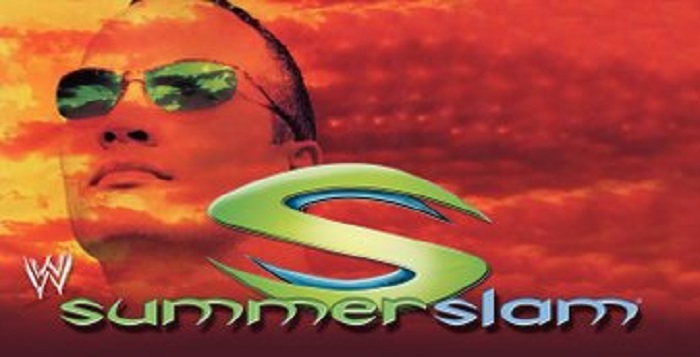 REVIEW: Summerslam 2002: The Next Big Great One