As you might have heard, I watch wrestling. Like, a lot of it. At this point, I’m probably up to 60,000 matches in my life and I’ve reviewed well over 5,000 full wrestling shows. I’ve been at this for over thirty years and we are living in an amazing golden era for accessibility to wrestling matches and shows. With more streaming services than anyone could possibly keep up with, there is more wrestling content available than ever before and the amount continues to grow every day. That isn’t always good news though, contrary to what you may hear.

Earlier tonight, I watched AEW Dark, which was a special mega sized edition, running one hour and fifty minutes. Considering that this is a web show, with only some short AEW ads included, there was about an hour and forty five minutes of content included. This is WAY more than your usual two hour TV show and probably pushing what an episode of Monday Night Raw offers. Your individual tastes on the show may vary, but there is a certain reaction to the show that I want to talk about this week.

I’m not a big fan of how Dark is presented. The show is wrestling for the sake of wrestling and while that does sound appealing on paper, it doesn’t exactly come off that well on television. The matches are almost never in doubt and it becomes more of a waiting game to get to the ending that you know is coming as soon as someone’s music starts. That is fine for a one or two off match, but twelve in a single night causes it to lose a lot of its charm.

It can work as a showcase:

Now of course not everyone is going to like every wrestling show. That’s all well and good and expected. However, there is a mentality that you may hear in reaction to complaints like this one that may also sound good on paper but don’t exactly play out all that well in practice. That would be the classic “Why do wrestling fans complain about having more wrestling?”

That’s a response you will see time and time again and in theory, it makes perfect sense. Of course more wrestling is a good thing and it is nice to see what one of the biggest companies in the world id offering. When you think about it though, the reality is not quite as simple as it sounds this idea does not hold up as well, at least under the right (or maybe wrong) circumstances.

Hopefully it isn’t this:

Consider the current Monday Night Raw product. There are very few fans who will tell you that the show is working and the audience numbers continuing to sink to new lows time after time would suggest that this is a common viewpoint about the show. Monday Night Raw’s audience has been eroding for a long time now and there does not seem to be much that WWE can do to stop it. You will hear a lot of the same criticisms about the show over and over but there are a few things that keep coming up: the creative is not very good and the show is too long.

That’s what brings us back to the idea of more wrestling being good, because it certainly doesn’t seem to be the case with WWE. If you were to say that the solution to Monday Night Raw’s woes are to make the show longer because more wrestling is a good thing, you would likely be told to hand in your wrestling fan badge and go watch live streams of competitive chess (side note: live streams of competitive chess are one of the most surprisingly entertaining things you will find).

As should be obvious, the amount of wrestling isn’t what matters. The important part is how the wrestling is presented. You can have a great show with only a handful of matches because you always have time for another match later. Sometimes the solution is a promo or a segment or something to build these people up so that fans are going to care about them.

That is what is missing from Dark. Yes they have all of the wrestlers out there, but would it be that big of a problem to have some promos from these wrestlers? Who is Ricky Starks and why should I care? Why should I be annoyed at the Initiative? Make me care about Private Party.

You could go on and one with this stuff and it doesn’t need to be anything long or even have some big production. In today’s world, have someone grab their phone and hit record. Let us know who these people are instead of throwing them out there in match after match and expecting that to be enough to get them over the hump.

Of course wrestling is important, but what matters so much more is having people out there that we care about. How important is any match going to feel if we don’t have a reason to care about these people? Steve Austin and Hulk Hogan aren’t the stars they are if we don’t hear Austin rebelling against Vince McMahon and Hulk Hogan wanting to stand up for America. Yeah they have their famous matches, but those matches don’t work without the effort being put in elsewhere.

But not everything can be this:

That’s where Dark loses me most weeks: it feels like having matches for the sake of having matches. I know that is a purist wrestling fan’s dream show, but it rarely works out well in practice. After the fourth or fifth non-competitive match of the night, how many fans do you think are either going to lose interest or just stop watching altogether? Somewhere in there you need something to hook them in with something, and having another match with two of the same people you see on the show every single week is not likely going to be the solution.

There is nothing wrong with having some good wrestling matches. The problem is the lack of drama on most of the Dark shows, as there is little reason to believe that anything surprising is going to happen and the format of the show offers very few breaks from the same routine that you see for hours on end. It’s ok to mix things up a little bit and throw in something else and Dark would be very well served to learn just that.

Of course there is nothing wrong with seeing more wrestling or even wanting to see more wrestling. Sometimes though, that isn’t what is going to be the most thrilling show. You might need something to break up the monotony, a reason to care about these people, or maybe just a little break from what you are seeing. Wrestling shouldn’t be a situation where you look down at the clock and wonder how there can be that much time left in a show. That is what happens every Monday night and if it doesn’t work there, it isn’t likely to work on Tuesdays on YouTube either. As usual, it’s the quality rather than the quantity, or can I interest you in Jinder Mahal vs. King Corbin for six straight weeks? 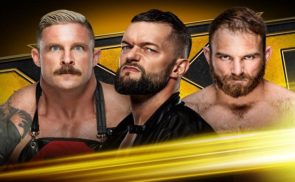