Who are you again? Referees have a weird role to play in the wrestling world as they are supposed to take care of everything that is going on in the match, communicate with the wrestlers and be in the right place at the right time, all without getting in the way. That is a heck of a lot to cover, but now Vince McMahon has made a decision to not recognize them by name whatsoever.

If there is one thing that WWE loves to do, it is promote the heck out of their performers. They have a lot of different people to present on all kinds of shows and that gives commentary a lot of things to remember. In addition to knowing names and moves, they also have to know what is going on at all times. Now they have one less thing to keep track of at any given time.

Former WWE referee Mike Chioda was a guest on Chris Jericho’s Talk Is Jericho podcast where he was asked about referees no longer being named on WWE TV. Chioda said that McMahon ordered that referees not be named on WWE TV after he heard a referee’s name that he did not recognize. As a result, no referees are allowed to be named by WWE commentary whatsoever.

Referees can be violent at times. Check out what happens when they get involved:

Opinion: This is as McMahon as you can get as there was probably a grand total of fourteen other people in the world who noticed this or cared in any way. It isn’t a change that is going to mean much in the grand scheme of things, but leave it to McMahon to do something that only he cares about just because he hears something that he doesn’t like for whatever reason.

What do you think of McMahon’s decision? Who is your favorite referee? Let us know in the comments below. 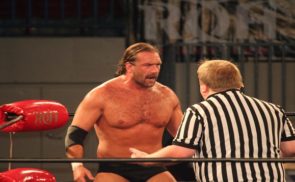