SmackDown is more interesting in a hurry. The biggest story of the week (and possibly the year) has been the SpeakOut movement, which has seen several wrestlers accused of sexual misconduct or assaults. This has been the case for wrestlers around the world, including a variety of WWE wrestlers. One of the biggest stars on the list was scheduled to do something big this week on television and that is what took place.

Before all of the news broke this week, WWE had already made some announcements about their upcoming programming. That included this week’s SmackDown, which had been taped in advance. The show was set to include the debut of Matt Riddle, who had been included in the list of accused wrestlers. Riddle’s debut was removed from the official WWE.com SmackDown preview, only to have it returned later in the day. Something seems to have changed to put Riddle back in WWE’s good graces and that was on display during SmackDown.

It was a great debut. Check out how Riddle got started:

This week on SmackDown, Riddle made his official debut on the show by interrupting AJ Styles’ Intercontinental Championship celebration. Riddle and Styles got in a fight, setting up an impromptu match. Riddle went on to defeat Styles, albeit without the title being on the line and with an unintentional assist from Daniel Bryan, who got in an argument with Styles. Following the match, wrestlers came into the ring and celebrated with Riddle, whose win was called one of the biggest upsets in SmackDown history.

Opinion: Ignoring everything else that is going on, this was a good way to set up Riddle’s debut and make him into a big star right out of the gate. The ending sets up a few match possibilities with Styles, Bryan and Riddle, all over the Intercontinental Title. It was a well done story and the action was good on top of that. I’m not sure if Riddle is going to be around given the outside circumstances, but things are set up very well if he is.

What did you think of the debut? What will he do next? Let us know in the comments below. 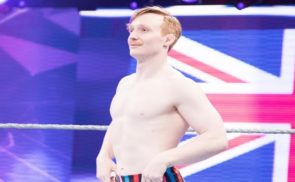