It’s the biggest night of the year for NXT and they’re getting to be in front of probably 15,000 people. Not bad for a show that regularly gets a few hundred people no? Anyway tonight’s main event is Bobby Roode defending the NXT Title against Drew McIntyre as NXT continues to do TNA better than TNA ever could. Let’s get to it.

Code Orange performs one of the three theme songs live, intercut with shots of the wrestlers on the card tonight.

Almas has Zelina Vega with him. The JOHNNY WRESTLING chants are out in full force tonight for what Mauro calls a quintessential crossroads confrontation. Almas takes him down into a headscissors to start and throws in some posing for good measure. Johnny is right back with a very nice series of rollups for two and we hit a front facelock. Some chops earn Gargano an elbow to the chest and he charges into a hanging armbar over the top rope.

Andrade stays on the arm for a bit until a drop toehold sends him into the buckle. There’s a hard double clothesline to put both guys down and things slow down a bit. Gargano is back up first with the slingshot spear for two and a good looking kick to puts Almas on the floor. Johnny follows him out with a suicide dive and you know that means an NXT chant. A slingshot DDT gives Johnny two more but another slingshot spear is countered into a faceplant.

Almas gets two off an inverted tornado DDT. Andrade takes him up top but has to counter a sunset bomb before hiptossing a charging Gargano into the corner. Johnny is right back with a headscissors into the Gargano Escape (that shoulder lock) but Andrade spins out into a rollup, which he lifts up into a buckle bomb.

The running knees in the corner get a VERY hot two and Almas is stunned. Gargano hits a pair of superkicks and a launches him face first into the middle buckle. Zelina throws in a DIY shirt at Johnny though and the distraction is enough for Almas to grab the hammerlock DDT for the pin at 13:13.

Gargano backs away from the DIY shirt.

Kurt Angle, Daniel Bryan, Billie Kay, Peyton Royce, No Way Jose and some others are in a sky box.

We recap the Tag Team Title match. The Authors of Pain have run through everyone around but they haven’t ever dealt with anything like Sanity. The rules are thrown out the window with this one and it could mess with the champs.

Corey Graves comes out to do commentary for the next match.

Sanity, represented by Alexander Wolfe and Killian Dain with Eric Young and Nikki Cross at ringside, is challenging. It’s a big brawl to start with the Authors clearing the ring before the bell. Sanity is more than willing to fight on the floor as Young sets up a table against the barricade. We finally settle down with Akum hamming on Wolfe until a charge misses.

Young jumps on the apron and tells Dain to go to the floor, which seems to be legal because Dain was never legally in and you can change lineups until that takes place. The things you learn watching a Takeover. The fight heads into the crowd with Akum missing a charge and going shoulder first into the barricade. It doesn’t seem to bother him though as he sends Young back inside for a Dominator.

A sideslam/middle rope stomp gets two on Eric and it’s off to Razar for a chinlock. Young tries to slide between Razar’s legs but gets choked down for his efforts. Razar misses a charge in the corner and there’s the hot tag to Wolfe to start the house cleaning. Everything breaks down and Wolfe snaps Akum over with a German suplex. The Authors are back up and try a superbomb but Wolfe reverses into a hurricanrana.

It’s back to Young for a neckbreaker but the top rope elbow is broken up. Nikki grabs Young’s legs to prevent the Tower of Doom though and it’s Akum powerbombing Razar by mistake. Eric’s top rope elbow gets two, followed by Sanity hitting back to back suicide dives. Cross loads up one of her own but Paul Ellering of all people cuts her off. Nikki dives anyway so Akum catches her, earning himself a spear from Dain to put all three of them through the table. A belly to back/middle rope neckbreaker combo puts Razar away to give Sanity the title at 12:15.

Result: Sanity b. Authors of Pain – Middle rope neckbreaker/Belly to back suplex combination to Razar (12:15)

Post match here are Kyle O’Reilly and Bobby Fish (ReDRagon, former ROH Tag Team Champions) to go after all four guys, including Chasing the Dragon and a modified high/low. ReDragon holds up the titles to make it clear before leaving through the crowd.

Jim Ross comes out for commentary on the next match.

Black gets played to the ring live. There’s not much of a story here other than Itami saying he wanted respect and getting his head kicked off by Black. They go straight for the kicks to start until Black sends him outside and moonsaults into his sitting position. Black charges into a kick in the corner and gets draped over the ropes for a middle rope Fameasser.

We hit the neck crank for a bit before a knee to the ribs cuts Black off again. Black has a bloody nose as Itami grabs a chinlock. JR: “It’s hard to kick someone in the head when you’re laying on the mat.” Black fights up but eats a DDT for two. Back up and Black starts hitting his kicks, followed by a sliding knee to the head.

A standing Lionsault is nearly botched as Black barely moves backwards, forcing Itami to go forward so the legs can hit him. Itami breaks up the Black Mass and gets two off a top rope clothesline. A spinning strike to the head drops Black into the corner and there’s a big old spinning kick to Itami’s head to knock him silly. Black goes up top for some reason but gets pulled down with a super Falcon Arrow for a very delayed two.

Itami crawls over to him but Black pops up (with JR possibly calling him Allison) for a strike off. The jumping knee to the face staggers Itami, only to have Black charge into another Falcon Arrow for two. There goes the kneepad but Black knees out of the GTS. Itami demands respect so Black Mass knocks him cold for the pin at 12:35.

We recap Asuka vs. Ember Moon. Asuka has been undefeated for nearly two years and has been champion for over sixteen months. She had to cheat to beat Ember in Chicago though and that gives Ember more confidence. The key to the whole thing is the Eclipse, which is the one weapon that even Asuka can’t prepare for.

Ember is challenging and looks almost confused during Asuka’s entrance. We get the Big Match Intros and Ember kicks her in the jaw early to start followed by a second kick to send the champ outside. Ember follows with a Cannonball to the floor but Asuka sends her hard into the steps for a breather. Moon comes up holding her bad shoulder so Asuka grabs a suplex onto the ramp.

Back in and it’s time for the kicks to the arm followed by a standing armbar. An STO sends Moon down again, with Mauro actually saying what it stands for (space tornado Ogawa) in your nightly trivia. Asuka grabs an armbar but Ember powers her up into an electric chair. Some kicks give Ember a delayed two, only to have Asuka German suplex her into the corner. The Asuka Lock is broken up and Moon grabs one of her own.

That’s reversed into the regular version with Asuka jumping onto the back. Moon falls backwards for the break and a clothesline with the good arm drops Asuka again. Asuka’s running hip attack hits the corner so Ember comes back with the middle rope suplex (ala Wade Barrett) for two more. They head back to the corner with Asuka not being able to hit a superplex. Instead Ember pulls her down for a Del Rio double stomp and two.

The Eclipse connects…..and it only gets two. Ember goes up again for a high crossbody but Asuka rolls through and grabs the trunks for two with the referee catching her in the act. A superkick gives Ember a VERY close two but Asuka pulls her down into the Asuka Lock in the middle of the ring for the tap at 14:36.

Ember gets the big standing ovation.

We recap Bobby Roode vs. Drew McIntyre. Roode debuted last year in Brooklyn and won the NXT Title just a few months later. McIntyre returned earlier this year in Orlando and said it was time for him to reach a level he didn’t reach in his first run. He said he took things for granted but nothing like that is happening this time. Of note, the package featured McIntyre’s old Broken Dreams theme music.

Drew is defending and is played to the ring by the New York Police Department Emerald Society Pipes and Drums. Roode’s entrance features a digital piano on the stage with blue lights sliding down to play the notes. The stage is covered by smoke and here’s Roode on his pedestal for the real entrance.

Drew shoves him away to start and we get a 3MB chant. Roode tries to chop to no avail, allowing Drew to hit his suplex slam. They fight out to the floor with Roode getting in a few shots, only to charge into a tilt-a-whirl slam onto the apron. A neck snap across the rope and a Blockbuster from the apron drop Drew though and the champ takes over. Roode gets two off a Rude Awakening and stomps away on the ropes.

There’s a missile dropkick to set up the chinlock for a bit as Nigel points out a bruise on Roode’s thigh. Bobby charges into a belly to belly and Drew gets in a top rope forearm to the chest. The Celtic Cross (White Noise) gives Drew another near fall. They head to the corner where Drew’s superplex is broken up, only to have Drew sit up out of the Tree of Woe for a kind of choke throw off the top.

Roode is smart enough to play possum and a Backstabber gets two. Future Shock gives Drew the same but his super Celtic Cross is countered into a running powerbomb for another near fall. Drew is back up with the Claymore but Roode’s foot is in the ropes. Roode heads outside so Drew busts out a huge no hands flip dive to put both guys down.

Back in and another Claymore is countered into a big spinebuster. The Glorious DDT connects for a very close two and both guys are spent. There’s another Glorious DDT but Roode picks him up for an attempt at a third, setting up the Claymore to give Drew the pin and the title at 22:26.

Post match Drew holds up the title but you can see the fans looking at something in the crowd. ReDRagon shows up on the apron and here’s the debuting Adam Cole (called by that name, complete with the announcers saying BAY BAY) to lay McIntyre out with a superkick. Cole holds up the title to end the show. 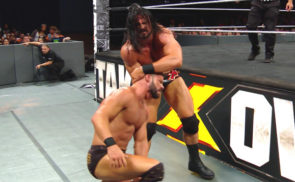