It’s the last show before Summerslam and there’s a big main event to send us home. This week features Jinder Mahal vs. John Cena in a non-title match, which likely means that Baron Corbin and Shinsuke Nakamura will be lurking around. Other than that we’ll be pushing some of Sunday’s lower card matches as well. Let’s get to it.

Here’s Mahal to talk about today being Independence Day in India. An Indian band performs a quick dance and then a woman sings the Indian national anthem. Mahal takes credit for the success of the WWE Network and goes on about how awesome India is until Nakamura interrupts. Nakamura says today is India’s Independence Day but it’s also Veterans Day in Japan. On Sunday, he’s taking the title.

The announcers send their best wishes to Ric Flair.

Naomi comes out for commentary. Becky grabs a rollup for one but gets the taste slapped out of her mouth. That earns her a slap right back, sending Natalya to the floor as we take a break. Back with Becky caught in an abdominal stretch until she makes her comeback with the clotheslines. The Bexploder looks to set up the Disarm-Her but Becky has to escape the Sharpshooter. A top rope legdrop misses though and the Sharpshooter makes Becky tap at 7:33.

Post match Naomi chases Natalya off from another Sharpshooter attack. Carmella comes out and teases cashing in her briefcase at Summerslam.

Tamina wants to know why Lana hasn’t made her ravishing yet. Lana says Tamina isn’t ready, which doesn’t sit well.

The Usos come in to see Daniel Bryan, who thinks they want him to join their rap group. It turns out they want to know which New Day members they’ll be facing Sunday. That would be Big E. and Xavier Woods, but the Usos want Woods and Kofi tonight. That’s cool with Bryan, who dances a bit as they leave.

Gable wastes no time in suplexing him to the floor but Rusev sends him into the steps a few times. Rusev tosses Gable over the announcers’ table and it’s a double countout at 1:16.

Result: Rusev vs. Chad Gable went to a double countout (1:16)

Post match Rusev puts Gable in the Accolade on the announcers’ table. Rusev grabs a mic and gets in the ring, only to have Orton come in from out of nowhere with an RKO.

Here’s AJ Styles to talk about Sunday’s match where Shane McMahon will be guest referee. AJ calls Shane to the ring and apologizes for accidentally kicking him last week. Shane says no apology is necessary but AJ is worried that Shane will use what happened last week to screw him over on Sunday. The boss says that won’t happen, but if AJ puts his hands on him on Sunday, Shane will put his hands on AJ as well.

AJ asks if that’s a threat but here’s Kevin Owens to interrupt. Owens loves those rules for Sunday because he thinks AJ has something planned. Kevin thinks AJ is going to try to get him to get into a fight with Shane on Sunday and cause a DQ. Shane tells them to shake hands but the fight breaks out with Shane having to block an errant AJ right hand. The ensuing argument lets Owens superkick Shane by mistake.

Non-title. Before the match, New Day said they’ll be seeing the Usos at Summerslam and goes over a list of places the Usos can see them before then. Kofi and Woods take turns hitting a long string of elbows, legdrops and splashes (over ten of them total) on Jey in the first minute. Double baseball slides drop the Usos and we take a break after a very fast start. Back with Kofi making his comeback and bringing Woods in off the hot tag to chop away. A double superkick to the legs set up a double superkick to the jaw but Jimmy makes the save. Jey superkicks Kofi’s knee and a double superkick his jaw for the pin at 7:49.

It’s time for the final episode of Fashion Peaks with Fandango recapping everything that’s gone on so far, including the alien probes. They were MENTAL probes of course, but here’s Breeze in a dress and blond wig. Breeze says they need to figure this out because the last thing they need is people thinking they’re making it up as they go along.

Fandango has a space rock that the aliens gave them, which he says can predict the future. He throws the rock and hits Ascension, who were returning pie. There’s a hair in the pie, along with a used Band-Aid and….GLUTEN! Viktor panics because they live a gluten free lifestyle and gets dragged away. There’s also a note in the pie, saying “Two B”. Fandango says he senses danger for the whole tag division. A graphic says they’ll return in two weeks.

Non-title and Jinder’s entrance is joined in progress. They fight over a test of strength to start until Cena shoves him away. One of the Singh Brothers gets in a cheap shot from the floor though and Mahal slowly takes over. Jinder throws him outside and we take a break.

Back with Cena initiating his finishing sequence.  The Singh Brothers pull Mahal to the floor before the AA but the referee catches them for an ejection. That means the STF but Mahal is over to the ropes. Mahal snaps his throat across the top and hits a knee to the face for two. The Khallas is broken up and the AA….gets two? That means a super AA but here’s Corbin for the DQ at 9:59.

Post match Corbin knocks Cena out and leaves….before realizing how stupid he would be to not cash in right now. Corbin cashes in the briefcase and IT’S ON!

Cena offers a quick distraction and Mahal grabs a rollup to retain at 9 seconds.

Corbin is livid and Mahal celebrates with the Singh Brothers to end the show. 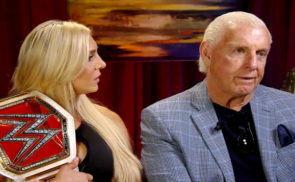 Update on the Condition of Ric Flair, Charlotte’s Response 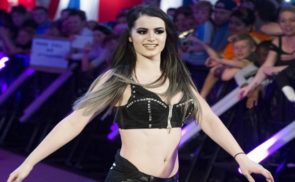