It’s the go home show for Summerslam and that means we’re in for the hard sell job. Aside from the big main event stuff, the main story tonight is the crowning of a new #1 contender to the Raw Women’s Title as Nia Jax will be facing Sasha Banks. The winner will replace the injured Bayley in Sunday’s title match against Alexa Bliss. Let’s get to it.

The opening video looks at the recent issues between Dean Ambrose and Seth Rollins. Dean isn’t sure if he should reunite with Seth and refused to save him two weeks ago. He did save Seth last week, but Rollins wouldn’t do the Shield pose with him.

Here’s Dean for an opening chat. Dean wants to talk to Seth in person so here’s Rollins. Seth gets right to the point: they would be unstoppable as a team. He’s done playing games and sticks out his fist. Dean isn’t sure but then says Seth has to be kidding.

He rants about Rollins not being there for him last week but Seth says that their differences are why they work so well together. Seth goes to leave but Dean stops him and puts out the fist. It’s turned down AGAIN and Dean takes him down for a fight. They fall out to the floor so here are Sheamus and Cesaro for the beatdown.

Ambrose and Rollins eventually fight them off and clear the ring, drawing one heck of a YES chant. Now Dean puts out the fist….but Seth isn’t sure. Then Seth puts out the fist but Dean isn’t sure. They finally put the fists out together and NOW we have the eruption that the fans have been holding in for weeks. Hang on a second though as here’s Kurt Angle to make the Tag Team Title match with Rollins and Ambrose getting the shot at Summerslam.

The winner gets Alexa Bliss for the title at Summerslam. Before we get going, here’s Alexa Bliss to sit on her throne (which looks like a lifeguard chair) at ringside. Nia runs Banks over to start and we’re off to an early break. Back with Nia swinging Sasha HARD into the barricade to leave her laying. Nia drops the big leg for two and tries a double chickenwing, only to have Sasha reverse into a kind of standing camel clutch.

That’s reversed into a Samoan drop for two, followed by a second to send Sasha rolling out to the floor. Back from a second break with Banks not being able to get a sunset bomb out of the corner but kicking Jax off the ropes instead. The double knees in the corner get two but Sasha charges into a boot to the ribs. Nia gets pulled into the Bank Statement (which now has an arm trap, making it a Crossface) and starts for the ropes, only to have Sasha switch arms. Jax powers up but gets DDTed back down, setting up the Bank Statement again to make Nia tap at 16:46.

The Hardys are in Angle’s office where the boss tells them they won’t be facing the injured Revival at Summerslam. Cue Miz and the Miztourage to ask what Kurt is going to do about Brock attacking them last week. Angle: “Nothing.” Kurt does say though that Curtis Axel will have his match with Jason Jordan tonight after it was canceled last week. Miz says he’ll take Axel’s spot, which is fine with Kurt. Miz is ready to yell about something when a referee comes in to say there’s a problem with Finn Balor and Bray Wyatt, sending Angle running off.

Back from a break with referees breaking up Balor vs. Wyatt. Angle comes in and says they’ll just have their match tonight.

Here’s Elias to sing a song about how terrible clam chowder is and how Boston is wicked cursed.

Elias jumps him before the bell and hits Drift Away, which is now a fisherman’s neckbreaker. No match.

A shark cage is lowered into the ring and here’s Big Cass for a chat. He tries to talk about what’s going to be happening at Summerslam but the fans keep booing him out of the building. Cass finally talks over them and says Enzo needs Big Show because Enzo knows he’s nothing without a guardian looking out for him. He doesn’t get why Big Show is hanging with Enzo lately, nor does he get why people cheer for Enzo. The fans are laughing at Enzo, even if they don’t get the jokes. Cass can’t wait for Summerslam when Enzo has the best seat in the house to watch his new buddy take a beating.

Cue Enzo to mock Cass being cut off so many times. He says Cass is rambling like a man who has been knocked out two weeks in a row. More insults are exchanged until Big Show comes out. The brawl is on until Anderson and Gallows come in to help beat Big Show down. They slam the cage door on his hand and Cass stomps on it for good measure.

Neville is defending in a match that was scheduled for Sunday. Tozawa grabs a rollup for an early two but the champ grabs one of his own. That means a face to face staredown in the middle until Neville gets kicked out to the floor. Back with Tozawa fighting out of an armbar and sending Neville outside for a suicide dive. He adds a second one and Titus O’Neil is all fired up.

The standing backsplash looks to set up the top rope version but Neville gets up for the save. They both head to the top with Neville drilling the superplex for no cover. Instead he gets up, only to get kicked in the head. Tozawa goes up again but Neville is up again and hides behind the referee. A leg trip sets up the Rings of Saturn but Tozawa reverses into a rollup for a VERY close two. Neville posts him though and the Red Arrow…..actually misses. Tozawa drops the top rope backsplash for the pin and the title at 11:26.

The announcers preview this weekend’s events.

Show has his hand examined and the medics think it’s broken. Enzo comes in and suggests they call the match off but Show says no way.

We look back at Sasha winning earlier.

Mickie James is in the back when Emma comes in to complain about fans loving Sasha winning. She started the Women’s Revolution and runs her mouth a lot but Mickie doesn’t want to hear it. A match is made for later tonight.

Another Summerslam match coming early. They go right after each other to start with Bray doing his hop over the ropes for a kick to the head. A right hand drops Balor onto the apron but he gets in a kick to the face and we take a break. Back with Bray hitting a gutbuster for two and hitting a hard clothesline. It’s off to a chinlock for a bit until Balor kicks him in the head for a breather.

Bray gets caught with another running boot for two but comes right back with his running crossbody. The backsplash gives Bray two more but Balor adds a quick double stomp to the ribs. They head outside with Finn getting the running dropkick against the barricade but the Coup de Grace is broken up. Sister Abigail gives Bray the clean pin at 11:23.

Bray gives him another Sister Abigail after the match. The lights go out and come back on with Balor sitting unconscious in the corner. Bray has a bucket and pours what looks like blood all over Bray.

We look at the opening segment again.

No entrance for either one. Mickie gets in an early kick to the face for two but Emma knocks her to the floor. Back in and a seated full nelson keeps Mickie in trouble. The comeback doesn’t last long as Mickie fights up, only to get pulled off the ropes for two. Mickie’s spinning kick to the head is good for the quick pin at 4:08.

Balor leaves Angle’s office and says that he has his rematch on Sunday. Balor: “Bray has his demons. At Summerslam, he’s going to find out that I have my demons too.” The fans ROAR at that mention.

Non-title. Cole reads off Jordan’s resume, which includes a degree in biology and THREE minors. The threat of an early suplex sends Miz outside for a breather. Back in and Jordan hits the running shoulder in the corner but the Miztourage comes in for the DQ at 1:46.

Result: Jason Jordan b. Miz via DQ when the Miztourage interfered (1:46)

Post match the beatdown is on until the Hardys make the save.

Joined in progress with Matt working on Axel’s arm before it’s off to Matt to crank on the other arm. Jordan adds a chop and it’s off to Dallas, who charges into a fireman’s carry slam. Miz gets pulled back in for some shoulders to the ribs until Axel pulls his boss out of the way.

We take a break and come back with Jordan rolling away from a middle rope elbow and bringing in Matt off the hot tag. Axel takes him down though and grabs a chinlock before bringing Miz back in for some left hands to the head. Matt sends him into the corner to escape though and the hot tag brings in Jeff for a good looking Whisper in the Wind. Everything breaks down and Jordan suplexes all three of them around. The Twist of Fate into the Swanton puts Dallas away at 14:45.

The Demon King is confirmed for Summerslam.

Neville will get his rematch on Sunday.

Angle is in the ring, which is surrounded by security, to bring out all four participants for Sunday’s Universal Title match. First up we have Brock Lesnar and Paul Heyman with Paul talking about how unfair Sunday’s match is going to be. It’s going to be all three challengers going after Lesnar and as a fan, Heyman thinks that concept sucks.

One day, a very long time from now, someone is going to be man enough to defeat Lesnar and become the new guy. However, it’s not going to be the false Samoan Samoa Joe or the Monster Among Men Braun Strowman, or the man who conquered the Undertaker, Roman Reigns. Heyman sees two possible options for Sunday.

Option A is Lesnar having the title stolen from him, meaning you might as well put him in a cage (Heyman: “HINT HINT!”). Option B is Lesnar wins and it turns out that Heyman has been underselling him all these years. This brings out Samoa Joe to say he’s putting Lesnar to sleep on Sunday.

Braun Strowman, now with his own shirt, comes out to say he’s always the last man standing. Joe takes credit for last week’s win and it’s FINALLY Reigns coming in as well. Roman takes Joe down but walks into the powerslam, leaving Lesnar vs. Strowman. Security comes in to break them up but are quickly dispatched. The locker room comes out and can barely hold them back to end the show.

Remember to follow me on Twitter @kbreviews and pick up the Complete 2002 Monday Night Raw Reviews in either E-Book or Paperback. Check out the information here: 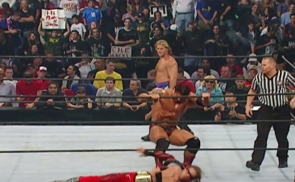 Watch: Edge vs. Chris Jericho vs. Batista at ‘SummerSlam’ 2004 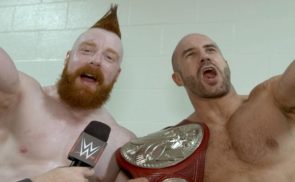