It’s kind of a new start for Ring of Honor as we officially finished off Cody vs. Christopher Daniels last week with Daniels losing his 2/3 falls rematch for the ROH World Title. Now we need a new challenger for the title as Cody is on his own at the moment. Jay Lethal is back as well and you know he’ll be a big deal again in a hurry. Let’s get to it.

We open with a quick recap of last week’s title match with Cody nearly laughing over his win.

Here’s Kazarian to get things going. He wants to know if the people here appreciate the things Daniels has done in this business. The fans seem to think so but Kazarian wants to know what was up with the reactions that Daniels received last week. If the fans here say they respect Daniels, every one of them are liars.

Kazarian isn’t sure if Daniels will ever wrestle again but the fans don’t deserve him anyway. These people are here to do stuff like throw streamers…..and we pause for the streamers to be thrown. Kazarian: “This isn’t Japan!” He’s going to make it his mission to destroy everything about Ring of Honor that the fans love because, in a singing voice, YOU DESERVE IT! Kazarian: “Stupid marks.”

Gordon is introduced as a member of the National Guard and he’s now in camouflage pants. Flip ducks a big boot and chops away to so much avail that he might as well be Ric Flair to Martinez’s Sting. They head outside with Martinez trying a chokeslam but not being able to follow up. A baseball slide and superkick from the apron stagger Martinez and a Lionsault puts him down.

Back in and Punishment easily hiptosses him into the corner before punching Flip in the ear for two. A clothesline turns Flip inside out and we head to a break. Back with Gordon hitting a springboard Sling Blade and a twisting frog splash for one. Gordon grabs a fireman’s carry and backflips into a Samoan drop, followed by a Lionsault for two. Back up and Martinez kicks him square in the face and a Falcon Arrow gets two. Gordon kicks him away again and heads up top, only to get caught by the throat for a super sitout chokeslam and the pin at 8:22.

Post match White comes out for another brawl with Martinez.

Kenny King is ready to take the TV Title from Kushida, who is all he thinks about.

Back in the arena, Ian suggests that Colt team up with the Tempura Boyz to face Dalton Castle and the Boys. Colt: “My own boys???”

Titus jumps him at the start and hammers away in the corner as Colt can’t stop talking about the Tempura Boyz. Cheeseburger gets two off a rollup but gets caught in a big backbreaker. A Razor’s Edge is countered with a hurricanrana to send Titus into the corner and there’s the palm strike. Cue Will Ferrara for a distraction though, allowing Titus to hit a frog splash (the Doggy Splash from the Big Dog) for the pin at 2:39.

Cody laughs off the idea of someone working harder than him or being able to take his title.

Colt agrees to face Cody (which doesn’t sound serious) but Ian says Cody has to face Sanada on the upcoming i-pay per view, which I believe is the first mention of the show that is less than a week away. Cue Dalton Castle and the Boys to agree to give Colt and the Tempura Boyz a title shot.

Kushida is defending and they have over twenty minutes left. They hit the mat to start as we hear what might be only our second reference to the upcoming War of the Worlds show. Kenny takes him down for an armbar before grabbing a spinebuster for two. A leg sweep sets up a modified Muta Lock as this is all King so far.

It’s too early for the Royal Flush as Kushida gets in the Hoverboard Lock, albeit over the ropes. King misses a corkscrew dive to the floor and eats a dropkick before being sent into the post. That’s fine with Kushida who hits a flip dive off the top to the floor, followed by the Hoverboard Lock back inside. Cue Adam Page and Marty Scurll for the no contest at 5:40.

Result: Kenny King vs. Kushida went to a no contest when Marcy Scurll and Adam Page interfered (5:40)

Post break King says he’s not having his title shot ruined by the Bullet Club B-Team. He wants a tag match right now and since we have ten minutes left in the show, let’s do it.

It’s a brawl to start with the fresh Club getting the better of it and stomping away on Kushida in the corner. Scurll gets in a kick to the head and it’s time to start in on Kushida’s arm. Kushida rolls over for the hot tag to King though and house is quickly cleaned. A spinebuster gets two on Page but Scurll pulls King outside for a whip into the barricade.

Back from a break with King still in trouble and Kushida getting shoved off the apron. Kenny kicks Page in the head and it’s off to Kushida for the house cleaning strikes. He even gyrates his way into the Hoverboard Lock on Page but Scurll makes the save and breaks Kushida’s fingers.

You don’t need ten fingers for a Hoverboard Lock though and Scurll is in trouble in the middle of the ring. Page makes the save as everything breaks down with King diving over the top to take Adam out. Adam clotheslines Kushida into the tiger driver from Marty for two. Now it’s King coming back in with the Blockbuster and a Royal Flush to put Page away at 8:55.

Post match King points to the title but shakes Kushida’s hand. One last mention of the pay per view (no card listed) wraps things up. 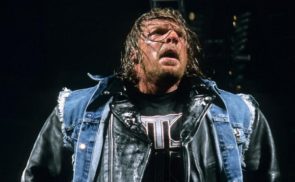 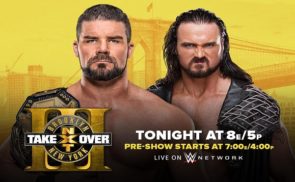