It’s Super Tuesday and they have a big time main event this time around. Tonight it’s a four way sixty minute Iron Man match for the vacant NXT Title. Tommaso Ciampa, Johnny Gargano, Adam Cole and Finn Balor are facing off for the title and that could make for a pretty major moment. Let’s get to it.

Street fight with weapons around the ring. It’s a huge brawl to start with everyone going after each other and hitting/throwing people into the weapons. A table is set up at ringside and Fandango puts a ladder on his head for the helicopter spot. Scott kicks a trashcan lid into Mendoza’s face and then knees Escobar in the face. Breeze sprays a fire extinguisher to clean house and we take a break.

Back with Scott kicking his way out of trouble but being knocked to the floor for a heck of a suicide dive from Escobar. Breezango tries to get back up but here’s Imperium to jump Breeze for a four on one beatdown. They get back inside but Scott and Fandango are standing on top of a well placed forklift to dive onto all four of them. Breeze is back in to clean house, followed by Breezango diving onto everyone but Escobar on the floor. Scott is alone with Escobar inside and it’s the JML Driver to give Scott the pin at 11:56.

Tegan Nox talks about being friends with Candice Michelle for years but since Johnny Gargano started following the Gargano Way, the spark went out of her eyes. Nox isn’t ready to live in a world where they aren’t friends because they’re sisters and sisters fight.

Kayden Carter is in Catanzaro’s corner. Kacy armdrags her down to start and grabs an anklescissors but LeRae is right back with a hanging neckbreaker. A quick trip to the floor doesn’t hurt Kacy that much as she comes back in with a rollup but gets elbowed in the face. Kacy gets fired up and unloads in the corner but gets taken down to the mat. LeRae ties her legs up and stomps Kacy’s head into the mat for the pin at 2:59.

Post match Candice grabs the mic and says seeing Carter and Catanzaro has made her miss her time with Nox. She would love to talk this out too so Nox should come by the house, because dinner is on Candice.

Rhea Ripley is sick of the Robert Stone Brand and wants Mercedes Martinez in a cage. That makes sense, even after the quick detour last week against Raquel Gonzalez and Dakota Kai.

They go with some grappling to start until Reed starts slugging away. Thatcher is smart enough to go for the arm to slow Reed down, though a big clothesline gives Reed two. It’s right back to the arm though with an armbar taking Reed down. Back up and Reed knocks him to the floor with a single shot, setting up a suicide dive to take Thatcher down again. Cue Austin Theory to jump Reed from behind though and Thatcher hooks a cross armbreaker. Reed turns it over but Thatcher switches into a Fujiwara armbar for the tap at 4:48.

Mercedes Martinez is down for a cage match with Rhea Ripley.

The title is vacant coming in and it’s a 60 minute Iron Man match, meaning no countouts or disqualifications. It’s a brawl to start with Ciampa clearing the ring off a bunch of knees. Ciampa hits some running knees to Balor and Gargano before getting in a slugout with Cole. Back in and Ciampa beats on Balor a bit more as we’re three minutes in. Cole gets in as well and Ciampa is sent outside, leaving Balor to hit a basement dropkick to put Cole down. Gargano joins them and stomps away on everyone before working on Cole’s arm.

Gargano kicks at the arm and grabs kind of a standing Crossface. Cole gets out and hits a neckbreaker so Balor takes Gargano’s place. That’s fine with Cole, who takes him down with a chinlock. Balor fights up with a running forearm into a double stomp to Cole. The Eye of the Hurricane gets two on Ciampa and it’s off to another chinlock. We take a break and come back with no falls and Gargano pounding Cole down into the corner and no clock to be seen.

Cole’s fireman’s carry backbreaker gets two on Gargano but the other two get back in. That’s fine with Cole, who kicks them in the head but gets kneed down as we have 43:00 left. Cole goes up so Balor catches him, with Ciampa turning it into a Tower of Doom. Gargano crotches Ciampa against the post though and gets two on each of them. We’re down to about 40:00 to go as Gargano hammers on Balor in the corner.

Balor comes back with a quick 1916 for two so he follows up with a Sling Blade into the shotgun dropkick. The Coup de Grace misses but Ciampa is right there with an Air Raid Crash for two on Balor. We take another break and come back with 36:00 to go and still no score. Ciampa and Gargano get ready for the big showdown but Cole and Balor send them outside. Cole suggests a Too Sweet reunion but Balor sends him outside for the big flip dive. The shotgun dropkick sends Ciampa into the timekeeper’s area and the Coup de Grace gives Balor the first fall on Cole with 34:23 to go.

Balor starts chopping away at Gargano and grabs a chinlock. That’s let go so he can take Ciampa down and then alternates stomps to Ciampa and Gargano. Cole gets knocked off the apron and we take a break. Back again with the same score and Ciampa hitting the Willow’s Bell on Balor. The Fairy Tale Ending connects but Gargano steals the pin to tie things up with 26:38 to go.

Ciampa breaks up One Final beat but Cole hits the Last Shot on Ciampa for a near fall. Another Last Shot (or Last Call as Vic puts it) is cut off by a hard clothesline but Cole is back with a superkick to Ciampa. Balor is back in with the Sling Blade to Cole but Cole superkicks him as well. There’s another superkick to Gargano and the Panama City Sunrise finishes Gargano at 24:40 to go.

That puts everyone but Ciampa at one fall and they’re getting winded. Balor breaks up the Last Shot to Gargano and Ciampa steals a near fall. A double Willow’s Bell hits Gargano and Cole, followed by the Fairy Tale Ending to Cole to tie things up with 22:41 to go. Everyone pulls themselves up on the ropes and the slugout is on again. Gargano and Cole fight to the floor while Balor wins a slugout with Ciampa inside. Another quadruple knockdown gives everyone a breather with about 19:15 to go.

Ciampa and Balor are back up inside with Balor being sent hard into the corner for two. A running knee in the corner rocks Balor but Ciampa knocks Cole off the apron and goes outside. Ciampa sends Gargano into the barricade and tosses Cole into the Plexiglas. That lets Ciampa applaud himself but Cole kicks him in the knee back inside. We take another break and come back again with the same score and 11:45 to go.

Balor cleans house again and Ciampa’s knee gives out to make it even worse. Cole is kicked to the floor and Balor grabs a half crab on the bad leg. That’s broken up as Balor has to go after Cole, followed by another shotgun dropkick to Ciampa. Balor has to knock Gargano off the apron meaning he misses the Coup de Grace. A double superkick from Gargano and Cole drops Balor and Gargano superkicks Cole to the floor for a bonus. There’s the suicide dive to Ciampa and another to Cole, capped off by a third to Balor, who pulls his out of the air. 1916 on the floor is blocked and Gargano hits a tornado DDT instead.

Back from another break with 5:00 left and the same score as Gargano getting the Gargano Escape on Cole. Ciampa pulls it to the floor for the break, putting them all outside. The limping Ciampa sends Balor into the Plexiglas and suplexes Cole on the floor. There’s a ram for Balor as well but Gargano is up to slug away at Ciampa with 3:00 left. Ciampa catapults Gargano throat first into the bottom of the ring but Cole makes the save. Ciampa covers again and this time Balor breaks it up, much to Ciampa’s annoyance. Balor and Cole are sent into parts of the set, with the delay allowing Gargano to get two off a small package.

We have 1:30 to go with Ciampa hitting Gargano in the throat to put him down again. Ciampa puts Gargano on top for a super Air Raid Crash with 30 seconds left. Balor comes in with the Coup de Grace though and goes up 2-1-1-1 with 20 seconds to go. Barrett declares him the new champion but Cole hits a Last Shot on Balor for the pin to even things up as time expires at 60:00.

Post match William Regal comes out to make Cole vs. Balor next week, one fall to a finish. 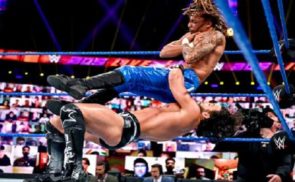