I’ve run out of ways to figure out what to expect from this show and in a way, that’s rather good around here. There is only so much you can expect with the rather limited roster around here and I’m not sure what to expect from that. We had a Cruiserweight Title match this week on NXT so it might be time for a new opponent. Or maybe a rematch since there was a loaded mask involved. Let’s get to it.

Tehuti comes to the ring for a match but during his entrance, Miles talks about how a rookie like him should be learning from the veterans. He might be rookie of the year though and this show exists because of him. Hopefully a veteran can bring the best out of him. At least he has an opponent.

Brian hasn’t been around for awhile. Miles has to spin out of an early armbar and Kendrick drop toeholds his way out of a hammerlock. Some armdrags into an armbar have Kendrick down in an armbar and there’s another into another. Back up and Kendrick kicks him in the face for two and it’s off to an armbar on Miles for a change. Miles fights up and slugs away, followed by a dropkick for two more. The trash talk is on but Kendrick small packages him for the pin at 4:57.

Nese runs him over with an elbow to the face to start and gets annoyed when Gray hits him in the ribs. A German suplex sends Gray into the corner and the Running Nese finishes at 1:40.

Lorcan armbars Martel to start but gets taken down into a headlock on the mat. It’s off to Burch to headlock Parker over as frustration sets in. Back up and Burch pulls a leapfrog out of the air and a middle rope dropkick puts Parker down again. Martel trips Burch down though and drops a few elbows. The armbar goes on again but Burch throws him off and brings Lorcan back in, meaning it’s time for some loud house cleaning.

Everything breaks down and Parker breaks up a Doomsday Device. Lorcan is fine enough to hit a top rope flip dive to Martel, followed by a running Blockbuster for two more. Parker gets tossed outside so Lorcan tries to suplex him back in. Martel grabs the leg for the Warrior/Heenan/Rude finish but the referee catches him because Ever Rise can’t even cheat to beat someone. The referee yells at Martel and Burch Crossfaces Parker for the tap at 7:54.

Result: Oney Lorcan/Danny Burch b. Ever Rise – Crossface to Parker (7:54)

They have looked worse: 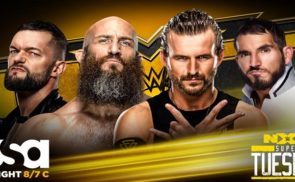