It just won’t end. The 2019 WWE Draft has come and gone with over seventy names being eligible to be chosen. Those names were to be divided up between Monday Night Raw and SmackDown, with the former getting three wrestlers for every two from the latter. The rosters were to be set in stone for the foreseeable future and that makes things more interesting. However, there were a few names who did not get picked and can still sign with either show, which two more people have done.

WWE has announced that two more undrafted named have signed with Monday Night Raw. The two names are the AOP, comprised of Akam and Rezar. The team has been appearing in vignettes to hype up their return as they have been out of action since December as Akam suffered a knee injury. They are two of over twenty signings who have been added to a roster since the Draft officially ended on Monday night. There is no word on when the AOP will make their in-ring return.

They’ve been talking lately. Check out some of their rather intense vignettes: 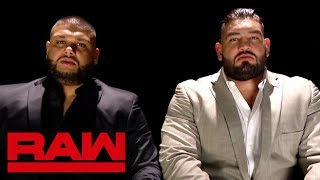 Opinion: This is the kind of team that could do a lot of damage on either show, but the big draw at the moment would be a heck of a hoss fight against the Viking Raiders. The fact that the Raiders recently won the Raw Tag Team Titles makes things even more interesting. If nothing else, it should be nice to get the two of them away from Drake Maverick, who was drafted to SmackDown. Maverick is a great talent, but I don’t know if he was the best fit with the team.

How do you see this going? Who do you want to see AOP face? Let us know in the comments below.