It’s the go home show for Hell In A Cell so it’s time for some hardcore build towards the pay per view. That is where this show tends to be the most useful, though you never can tell about the exclusive matches these days. If nothing else it might be nice to see some of the bigger names around here for a change. Let’s get to it.

Ricochet avoids a charge to start but Metalik flips out of an armdrag attempt. The flipping exchange is on and they both miss some kicks until it’s a standoff. Ricochet slams him down and drops an elbow for two before hammering away in the corner. A headscissors out of the corner sets up a quickly broken chinlock on Ricochet, who is right back up with a springboard standing moonsault. A middle rope hurricanrana into a standing shooting star gives Ricochet two but Metalik is back up with a sunset flip for the same. The Metalik Driver is broken up though and it’s a Kick Back to give Ricochet the pin at 5:57.

Reigns, with Paul Heyman, is defending and Strowman is in street clothes. A Superman Punch puts Strowman on the floor to start and Reigns adds the apron dropkick. Reigns knocks him around again, including sending Strowman face first into the announcers’ table. Strowman gets in a shot of his own and sends him over the announcers’ table, followed by the running shoulder over the barricade.

Back from a break with Strowman hitting…something in the corner as the camera stays on Goldberg in the crowd. Reigns tries the Superman Punch but gets caught in a choke. That’s switched into a powerbomb, followed by the chokeslam for two on Reigns. The kickout includes a low blow and the spear gets two. Another spear is countered into a powerslam attempt but Reigns slips out. Strowman tries a pop up powerbomb but Reigns counters into a guillotine choke of all things and Strowman taps at 10:40.

A different way to do things:

Post match here’s Jey Uso to stare Reigns down as Reigns hits a spear on Strowman. Reigns grabs a chair and says if he can do this to Strowman, what could he do to Jey? Reigns unloads on Strowman with chair shots, so here are the referees and agents to….not quite break it up. More chair shots keeps Strowman down so Uso gets in, with Reigns dropping the chair. Reigns says this makes no sense and tells Uso to beat on Strowman instead.

Uso grabs the chair and Reigns turns his back so Uso can hit him. Jimmy doesn’t do it, instead punching Reigns in the face and superkicking him down. Jey shouts that he loves Reigns too and chairs him down, drawing the referees back in. With Uso being held back, Reigns hits the Superman Punch and says it took him turning his back for Jey to have his best shot. Reigns leaves as Jey is down to end the show.

Lana is challenging and gets headlocked to start. Asuka runs her over and dances, setting up the Asuka Lock but Lana is in the rope in a hurry. A rollup gives Lana two and she kicks Asuka down for the same. Lana kicks her down again but the Asuka Lock retains the title at 2:16.

She has a shot:

Post match here are Nia Jax and Shayna Baszler to jump Asuka and put Lana through the announcers’ table for the fifth time. Back in and Asuka gets to her feet to kick Shayna to the floor and escape.

Here are Bayley and Banks for the contract signing, with Adam Pearce overseeing things. Banks signs in a hurry but Bayley says she is wanting to get this out of the way so she can continue her record setting reign. Bayley says Banks has been waiting to turn on her but Banks says if she could have she would have. Banks promises to take the title so Bayley grabs the chair, which Banks grabs as well. Bayley bails without signing, so Banks promises to make her sign no matter what.

She’s not ready yet:

Commentary actually mentions their rather detailed history. Garza hammers him in the back to start but gets caught in a headlock. Carrillo flips out of a headscissors and hits the high angle springboard monkey flip to send Garza outside. A flip to the floor is cut off with a superkick though, allowing Garza to TAKE OFF HIS PANTS as we take a break.

Back with Carrillo fighting out of an armbar and getting up a boot in the corner. Garza kicks him down for two more and we hit the Rings of Saturn of all things. That’s broken up as well and Garza hits a springboard spinning kick to the face. A missile dropkick gives Carrillo two and a springboard spinning headbutt gets the same. Garza grabs a rollup with tights for two of his own but the referee yells at him for the cheating. That’s fine with Garza, who hits the Wing Clipper for the pin at 10:17.

The Cell is lowered and here’s Randy Orton for a chat, because there was no way this show was ending with anything but talking. Orton sits in a chair in the middle of the ring and talks about all of his memories in the Cell. He remembers hurting Jeff Hardy and others, but all of his opponents were legends. That word interests him because there are legends and then there are legendary moments, like when McIntyre beat Brock Lesnar….and here’s Drew to interrupt. Orton says McIntyre can come on in so Drew grabs some bolt cutters and opens the door. Drew comes in and slams the Cell shut and the show goes off the air.

And that’s how it ends: 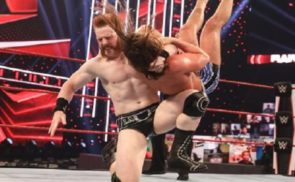